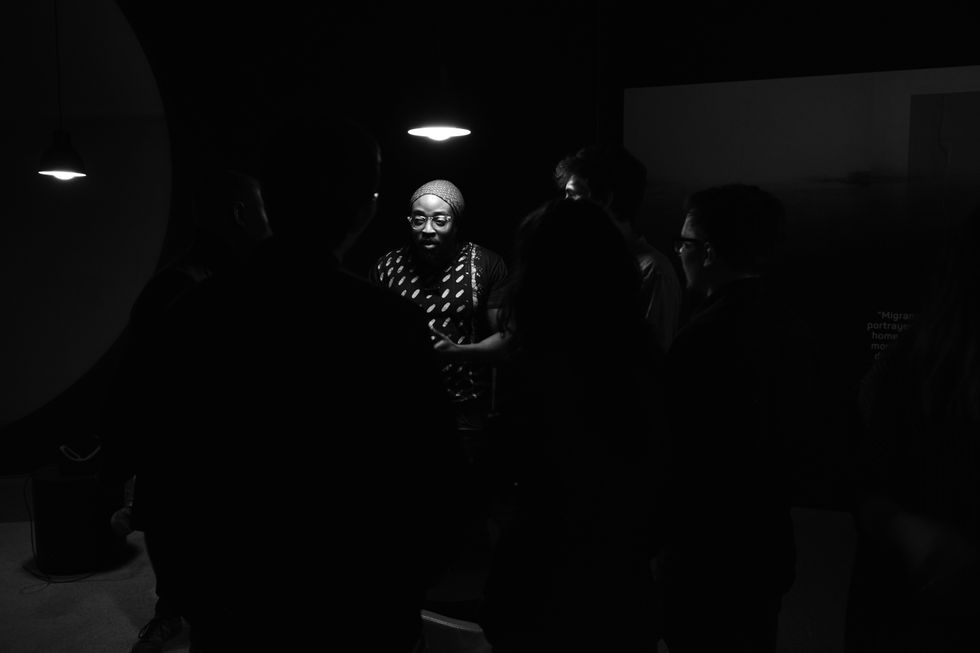 We speak with South African architect and curator Mpho Matsipa on her exhibition "African Mobilities" which is on view in Munich until August 19.

At first glance, you would not expect architecture to be the area where social changes are reflected most quickly. Every construction site in your city proves it all over again: The planning, designing and erecting of structures and buildings does take its time.

African Mobilities is an exhibition focusing on movement. Migrating, circulating people and the exchange of ideas, resources and aesthetics across borders. How does that relate to architecture?

African cities are reconsidered as sites of innovation, rapid transformations, new architectural typologies, infrastructures and technologies, highlights the curator Mpho Matsipa in her statement. The exhibition seeks to explore how architecture responds to the complexity of African Mobilities—beyond the figure of the refugee.

At the same time, the exhibition breaks with the expectations that are connected with the media image of Africa and from which the field of architecture is not excluded.

"If I speak to my colleagues in various parts in Africa they don't identify with the ways in which we are represented. This is about centering African voices and imaginations about the future and not always being consigned to a discourse of crisis that only allows for one particular kind of response," Matsipa says. Workshops and conferences over a period of two years were held in different African cities, Munich and New York, leading up to the exhibition African Mobilities. The result is a multi-disciplinary show with fresh perspective on the interface of art, architecture and social research.

But the reach of the ideas behind the exhibition does not end at the threshold of the showroom. Instead of an exhibition catalog, the website africanmobilities.org was launched, as a resource for the ongoing discourse on mobility. On there, the Chimurenga Library, an online archive with more than 500 books, music titles and movies, lays the foundation for a different kind of architecture—the cultural infrastructure of ideas, motifs and stories. Because that is where the very origin of architecture lies.

We speak more in depth with Matsipa about African Mobilities in the Q&A below.

Ann Mbuti for OkayAfrica: The full title of the exhibition is African Mobilities: This Is Not a Refugee Camp Exhibition. It's quite unusual to say what an exhibition is not about. Can you explain how you ended up using this title?

Mpho Matsipa: I felt it was a necessary intervention. I followed the hysteria about what is imagined to be large number of migrants from Africa, Eastern Europe and Asia into Europe and the truth is that there are many more people moving in Africa and across African borders than into Europe.

It's important to have far more complex and many more representations by Africans who deal with the complexity of the different kinds of mobility and circulations that happen on the continent beyond migration studies, crisis or developmental language. The title is a response to the dominant representations of Africa as a space of crisis and the thinking about mobile African bodies as refugees.

Does that mean the exhibition excludes this subject completely?

We owe it to ourselves to speak to that crisis. There are contributors to the exhibition who themselves are refugees. Aisha Balde, for example, came to South Africa as a refugee, but she doesn't concern herself with repeating representations of refugee camps, but rather provides a very complex reading of geopolitics, of the construction of territories, of UN regulatory loopholes.

There are many exhibitions that have already taken place, that are deeply concerned with migration and crisis architecture, so this is a discourse that is very well circulated, understood and documented. African Mobilities includes the subject by treating it in a much more complex matter than reducing it to a space of temporary fix of the camp.

African Mobilities is shown in the museum of architecture in Munich. Why should non-architects go see it?

There's a graphic novella, there's an animated film, there's an audio book, there's tapestry work, there is a thinking about the seven African regions as one sonic zone that connects the Congo to Zambia, Zimbabwe, Mozambique, South Africa. The freshness of the approach and the diversity of visual and spatial languages can appeal to people in different registers.

Let's talk a little about the process of the exhibition. Over the last two years workshops were held in different African cities, Munich and New York. What was the main insight gained from these meetings?

Even though we all come from this country called Africa, in each location the sets of concerns and questions are actually very different. It's almost impossible to theorize a costal city like Lagos from a costal city like Cape Town. Everybody speaks from their located-ness.

But the purpose of the workshops really was about helping and supporting the contributors to develop content. Building a public for conversations around architecture and its features and allowing African students to have direct access to leading young thinkers on African subject matter.

Why was that necessary?

Because from my experience of teaching elsewhere outside of Africa, European and American students get to have a lot of mobility so they can go to Africa, do a study abroad or studio. That kind of mobility is not available to African students, simply because our universities cannot support it.

The idea around these exchanges is to get different architects and artists to travel to sites where students could have immediate contact with them and feel that they are center of a conversation, even lead it to a certain degree.

Do you have a favorite African city?

I have so many loves. I think Harare is a sexy beast, there is a rambling beneath the surface and a lot of creative energy that is on the cusp of bursting out. It's just a matter of time before Harare has a creative explosion, I can feel it. I was struck by the fact that the Zimbabwe National Gallery for instance was able to host an incredible African art and culture conference with cultural producers from all over Africa and the diaspora. And this in the middle of a credit crisis, so I'm just curious what will come out of Zimbabwe once the situation there is stabilized. Lagos is my love, because of its energy, but I also love Johannesburg because of that. I love them all equally, like siblings.

A city like Johannesburg has never loved me, but it hasn't stopped me from loving it back and it has a strange way of giving way. If you have an idea and the resources to make that idea happen, things are possible in this city. And things can happen quite rapidly.

There's a boundlessness in Lagos with people's imagination for and of themselves. It is so much bigger than the material reality suggests, there's some kind of city above and a city below. And the stuff that's happening beneath the surface, the networks, the desire, the aspirations are enough to override the lack of infrastructure that people have to deal with.

Doing research on-site in the various cities in Africa makes sense, Munich, where the museum is situated, makes sense. But what was the reason for New York?

As far as I'm concerned New York is another African city. There are slave remains from its pre-colonial days, it has a massive African diaspora population, people from the South of the U.S.; from the Caribbean. I can get African food in New York that I can't get in Johannesburg.

I lived in New York and I had a very positive experience of being black and African. There is a density to this experience that I absolutely loved. I'm very interested in finding the spaces where experiences overlap and to have more productive exchanges which was easier for me to do in New York than it was in Germany where I'm very new.

Did the current political tensions in terms of migration in Germany influence you?

I was hoping that would happen at Munich Exchange [the conference shortly after the opening of the exhibition—A/N] and also by inviting different diasporic communities to take the space. African Mobilities is an opportunity to start conversations and it is an open invitation for people in Germany who are engaged with questions of migration to lead that conversation.

I remember talking to two African-German women visiting the exhibition and saying it's very rare to see a positive representation of Africa in Munich, most of the times it's only poverty. They wanted to bring their children there so they can see that there is African literature, books, music, a beautifully designed space that is dealing with larger African subject matter. The aesthetic is also kind of politics to which these women were responding in a very immediate and personal way. None of them were architects, but they loved the fact that this exhibition was happening—in Munich.

What will happen after the exhibition in Munich closes in August?

We are working on turning African Mobilities into a traveling exhibition to three cities, but I can't reveal them yet. A large part of the moving exhibition is to think carefully about the ethics of research: what will be left behind after the exhibition closes? I take the ethics of research very seriously, because there has been a long tradition in Africa of people coming to locations, extracting information, then go off and have the exhibitions in great rich cities somewhere else. And it's not clear what the people who hosted us and gave us access to the city will get out of that experience. I also received the invitation to submit a book manuscript on African Mobilities. We have the workshops, the exhibition, the website, and the next project is the traveling show and putting the book proposal together.