Paul Sika: The Ivorian Photographer With ‘Visions Of Things To Come’ 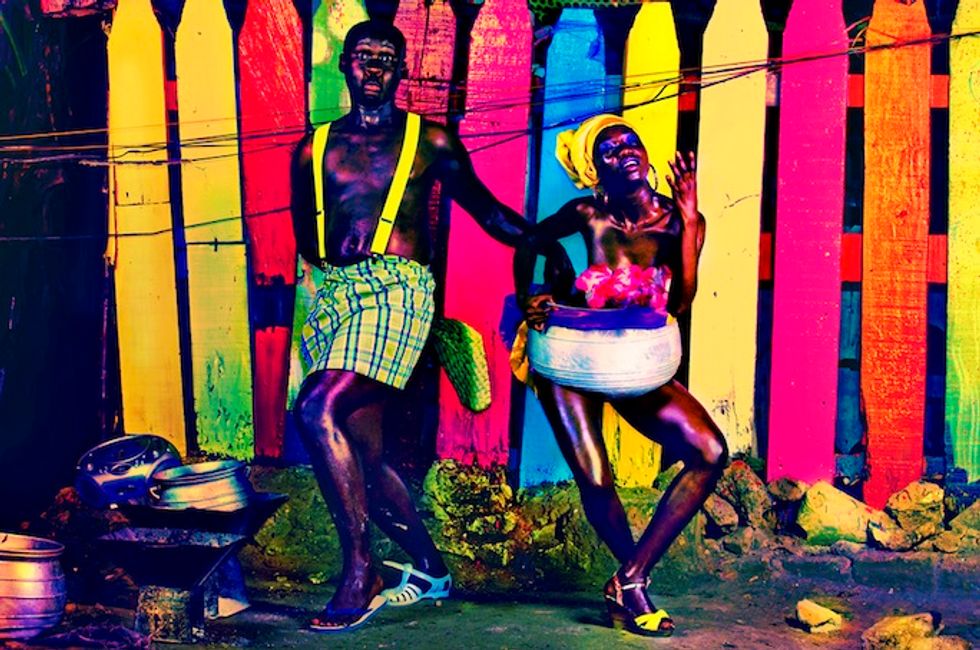 Ivorian photographer Paul Sika has birthed his very own style. He calls it 'photomaking' and combines digital photography with painterly post-production to produce brightly-coloured, densely textured images teeming with energy and drama. Born in 1985, he travelled to the UK to study Software Engineering, in the hopes of making video games — that was the dream until he had an epiphany while watching the trailer for The Matrix Reloaded. He purchased a camera, began taking photographs and moved back to Abidjan where a burgeoning arts scene always provides inspiration and a cast of young creative people contribute to his photographic practice.

In contrast to the established tradition of West African studio photography, Paul Sika's richly imagined images are dense with highly saturated colour and bodies striking exaggerated poses. His aim is to force the viewer into an unfamiliar headspace, in which a new conversation — quite outside the ordinary — can begin. So when Sika said that he hoped, with his work to give "visions of things to come," we began to understand just what he meant. Flick through the gallery above and read on to learn more about Paul Sika's global influences; his unique concept 'photomaking'; a guide to the Abidjan arts scene and understand the importance he places on critical engagement with African photography.

OKA: Have you always been creative?

Paul Sika: I'm naturally inclined towards creativity. Since I was a kid I've been fascinated by storytelling, but I didn't realize or put it into words until later. I simply had not conceived of it as being creativity. But I loved doodling and my cousin and I would invent stories to tell each other before sleep using characters inspired by people at school.

OKA: What made you switch from studies in Software Engineering to photography?

PS: One day I was walking down Tottenham Court Road and saw a trailer for Matrix 2: Reloaded. Mesmerized, I thought to myself that if this was the type of imagination required to make great movies, then I was well equipped. I was glad to change direction because I thought of filmmaking as a great avenue of creative expression, and a more suitable avenue than making video games, which was the reason I was enrolled on a Software Engineering course. Not wanting to stop my engineering studies, I bought a camera and started experimenting with the static image which I conceptualized as the unit of the moving picture. Surprised by the vastness of the medium, I remained in the field of photography.

OKA: Was your family encouraging?

PS: My family didn't encourage or support me in the beginning. They were wondering what I was trying to do. But the situation became an indirect opportunity for me to sharpen my determination, perseverance, resilience and other qualities that I needed to realize my dream. Today, my parents understand what I am doing. As it became clearer to them, support naturally sprung up. It has happened gradually. I'll use the opportunity to say thanks to my mother and my sister, my two ladies; they have done so much for me.

*Paul Sika, from the 'Dandelia' series

OKA: Why do you prefer the term 'photomaker' to photographer? Do you see your work pushing at the boundaries of the photographic medium?

PS: Photomaking is a term I coined by combining PHOTOgraphy and filmMAKING. It underscores the fact that my photography is heavily influenced by filmmaking. I think of myself as a motion picture director using a still photo camera. In terms of goal, my method is not to push boundaries, but to express my imagination to its fullest and tell beautiful stories.

OKA: Can you describe your technical process? Has it become more systematic over the years?

PS: Influenced by filmmaking, my technical process starts with imagining the story, which I then write down as a script. I break that script down into sequences which eventually become photos. Then I cast models and we rehearse if needed. After that comes principal photography, which produces the digital stills I use in post-production. And finally I apply a layer of digital painting to create the look necessary to effectively tell the story. This process has streamlined over time as I gained more experience.

OKA: Your works are based on digital stills, but the final images are these vivid 'technicolour dreamscapes' that look almost like paintings. Why do you choose to work in such bold, bright colours and create these more painterly images?

PS: Colour is an element of my story-telling as important as the shapes of objects and lighting of the scene.  It reflects the essence of the story I'm telling and helps foster a certain mood. The colours I use also grab people's attention: in a busy world where we move fast and are bombarded by visual, audio and other sensory stimuli, they shout at the viewer's mind, and work to create the fraction of silence in the observer necessary to start the conversation.

OKA: There's a strong tradition of studio photography in Francophone West Africa (Sidibe, Keita, Mama Casset), do you see your work as part of that tradition? Often your images are crowded with people, shot outdoors and look like stills from a play or movie. What are your photographic references or influences?

PS: Just like a sailor searching for a grand treasure, I've taken the direction which will lead me to the fulfillment of my vision of art and photomaking. Thus my positioning has been orchestrated in accordance with my own cherished destination rather than relative to the people who have travelled before me.

Regarding influences, the world of filmmaking started it all: The Matrix and Star Wars particularly. Years of video games introduced me to various aesthetics I love: Zelda, Mario Bros, Street Fighter, Tekken, Capcom VS SNK 2. Comic books and animation, be they from Japan, Europe or Africa, must also get credit: Le Journal de Mickey, Lucky Luke (Morris, Goscinny), Dragon Ball Z (Toriyama) and some of the anime directed by Hayao Miyazaki have been influential.  In terms of painters, although I'm more interested in single pieces than whole bodies of work, Eugene Delacroix, Michelangelo, and Gauguin come to mind.

OKA: What kinds of representations of Cote d'Ivoire/Abidjan are you trying to create with your photography? What kinds of stories do you want to tell?

PS: Recalling my conscious wish to be a filmmaker and photographer, my first goal is to tell beautiful stories that will contribute to the positive transformation and evolution of the human being. Cote d’Ivoire and Abidjan influence the language I use to tell those stories: they constitute a visual dictionary from which I take unique object-words to formulate the unique visual phrases that make up my stories. There is an entire language developed in my work using them, which could be the object of study.

*Paul Sika, from the 'Puneu Puneu' series. Character Joue Rose (Pink Chick) in a deep state of reflection and analysis that will lead him to the next phase of his life

OKA: In your interview with CNN you talk about wanting to show 'happiness, hope' and 'positivity' in your images. You also say that your work does not just aim to show people in a 'flattering' way but 'in ways that are real'. Why is that distinction - between 'flattering' and 'real' - important to you?

PS: Flattery is related to insincerity and falsification which are the complete opposite of my way, and by extension, of the way of the Artist. As a visual communicator and a storyteller my role and function is to shatter the deceits and illusions of life while relating things as they are, and offer visions of the things to come. Thus the happiness, hope and positivity which emanate from my work are truthful representations of what is. The purpose of my work is to bring balance.

OKA: Recently the international media has been discussing Ivorian art and the Abidjan arts scene in light of the 2010-11 post-election crisis. How was the arts scene impacted by the upheaval?

PS: The post-election crisis was the last Great Event in Cote d'Ivoire, therefore it's understandable that there is a reference to this deathly period when speaking of the Renaissance of Art. When Cote d'Ivoire creates more joyful events as a nation, references will eventually be made to those. The arts scene was impacted by the upheaval. Many projects were cancelled or delayed because of the instability. I had been chosen as the art director for TED x ABIDJAN but in the end, the event didn't happen.

OKA: Can you describe the Abidjan arts scene? How would you like to see it change or grow in terms of galleries, funding sources, buyers etc.?

PS: The Abidjan arts scene is at a younger stage compared to older and greater scenes such as New York City. However, a beautiful and accelerated growth is being initiated and sustained. New players are arriving and older participants are adopting new directions. We have for example the Donwahi Foundation for Contemporary Arts and the Cécile Fakhoury Gallery which are world class exhibition spaces. Young collectors, nationals and internationals, are engaging in relationships with the scene. We can cite for example Frederic Tapé, a media and real estate entrepreneur. A critic I admire for his capacity to decode and explain art is Franck-Hermann Ekra who won first prize of the International Association of Art Critics (AICA).

The scene is burgeoning and teeming. And regarding the growth of the Ivorian art world, I’m convinced we are going to witness the type of revolution that the soccer world has known with the generation of players such as Didier Drogba, Yaya Touré, Kolo Touré and Emmanuel Eboué.

OKA: Which Abidjan/Ivorian artists are producing work that you admire/think deserves more attention?

OKA: Can you tell us about future projects or plans?

PS: At The Heart of Me, my photo and prose book was released last month and became an Amazon art bestseller. Originally written in English, I plan to make it available in several other languages. Currently, the French version is ready and will be released soon. The Italian translation is also in the works. Anyone interested in translating can contact me; it will be a pleasure to exchange about it!