African Robots Make It To London 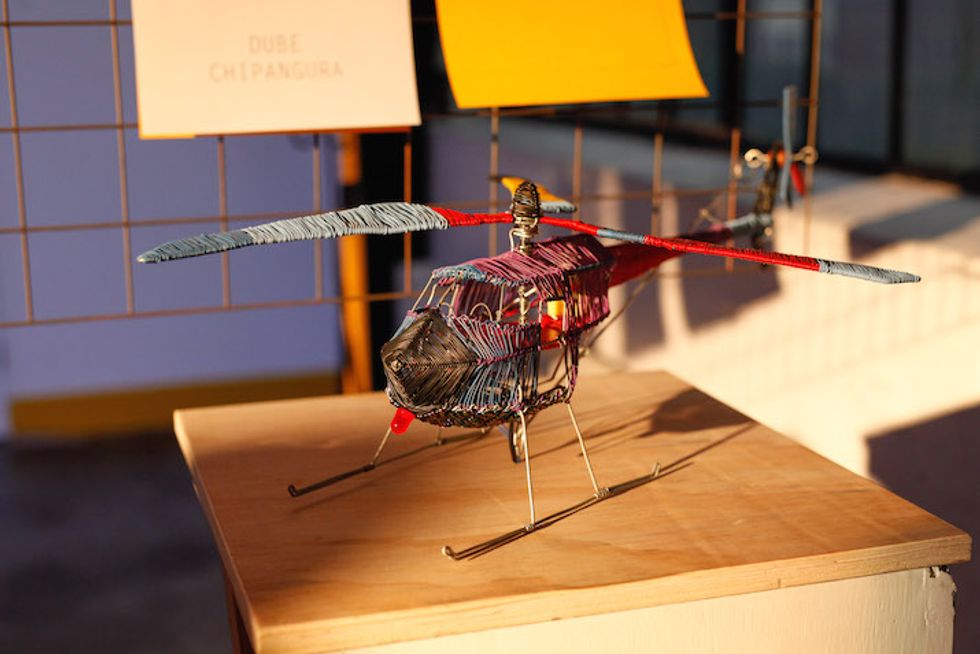 African robots are in London this summer. Or more specifically, the ongoing interactive electronic street art project of South African artist and researcher Ralph Borland set up shop last month at Machines Room in East London. Borland, who studied sculpture at the University of Cape Town, where he's currently a postdoctoral fellow, began the project– which focuses primarily on wire work– as a way of introducing an electronic component to street wire art in South Africa and Zimbabwe. We spoke with Borland over email to find out more about his electronic street art work.

Okayafrica: What are "African Robots"?

Ralph Borland: African Robots is a project to introduce interactive electronics to 'wire work' art in South Africa and Zimbabwe, a form of street craft where artists make three dimensional forms from wire – it’s a very economical use of material to define a form. Electronic components can with the right know-how also be used as a cheap source of material to create new forms and actions. The project uses salvaged electronics from cellphones and toys, as well as raw components. The intention of the project is to share skills with wire workers, with the hope that the approach may catch on and become a new form of production in the streets of South Africa and Zimbabwe - as well producing art and design works for other venues.

I'm enjoying working on the project for the way it combines so many of my interests: it's an art project, both as an intervention in real life and in producing new objects; it's a social engagement project, sharing skills and knowledge with street artists and crafters; and it's a design project, with the potential of realising products, but also as a work of 'design fiction' (or 'critical design') in imagining a near future scenario and producing artefacts to depict it. These are all areas I've examined in my academic work, and it's great to have the opportunity to explore some of these ideas in practice.

When and how did you start working with African robots?

The idea for African Robots grew from observing two informal networks in operation on the street in Cape Town, South Africa - wire work art and cellphone repair - and proposing to link them to one another. 'Wire work' is a type of art and craft production, which sees mainly Zimbabwean migrants to South Africa making objects from wire and selling them in the street. The second network, for street cellphone repair, seemed to offer a ready source of electronic parts that could be combined with wire work art to make automatons. In practice, cellphone parts are only one of the sources we're using - they're convenient for rechargeable batteries, speakers and screens for example, while cheap motors come from other sources. The project also looks to the hacking of cheap electronic toys for parts.

The first prototype for African Robots, 'Starling', was produced in August 2013, with the assistance of Henrik Nieratschker, a Masters student from the Design Interaction programme at Royal College of Art in London, and Dube Chipangura, a wire artist based in Cape Town, South Africa. Starling 1.0 runs on a phone battery and incorporates a sound-synthesizer whose pitch depends on light exposure, glowing LED eyes, and head and wing movement via a cheap hacked motor and handmade gear. It was exhibited at Design Indaba in Cape Town from 28 February – 2 March 2014 on ThingKing’s Maker Library Network stand, and in the traveling Maker Library exhibition in the UK later in 2014.

'Starling 1.1', the next in the series, is on exhibition at the Vitra Design Museum, as part of the Maker Library Network exhibition. It uses a hacked mp3 player for sound, and incorporates a transparent removable back panel. It was made with the assistance of wire artist Bongani Matinde, and electronic engineer Daan de Beer.

How is your art being used in South Africa and Zimbabwe?

So far I've run workshops with wire artists in Harare, Zimbabwe, as part of the Harare International Festival of the Arts (HIFA) and in Cape Town, South Africa, to produce work and explore skill-sharing around the project's aims. In Harare, we hacked electronic toys I'd bought on a research trip to Brazil, taking them apart and imagining and making new forms around them. An animated soft-toy of a cat, for example, became a mechanical digger made of wire work and powered by the same mechanism - from cat to caterpillar! In Cape Town, we worked with simple motors and LED-controllers to make animated objects - a tortoise that moves, or a bird that flaps its wings for example.

What should folks expect from the exhibition in London?

The exhibition in the UK this year is at Machines Room, a British Council Maker Library space on Vyner Street in East London, just down the road from Technology Will Save Us and Hirsch&Mann, the two UK companies with whom I am working on the project this year. The exhibition shows some of the work made in Harare, and in Cape Town, along with a collection of reference objects, and Starlings 1.0 and 1.2.

There are two closing events for the exhibition this week: on Thursday 3 September, the exhibition will be open in the evening as part of London's 'First Thursdays' gallery night, and on Friday 4 September at 7pm, there will be presentation about the project hosted by Alterfutures a critical design event in London, also at the exhibition space. Stay in touch through the exhibition event page on Facebook and the project website AfricanRobots.net.

Friday's Alterfutures event will see presentations by me and Cher Potter, a senior research fellow at the V&A Museum in London, who will present her new 2-year project on design futures in Sub-Saharan Africa, which starts next month and runs until 2017. This project brings together design theorists, technological innovators and museum professionals from six different centres - Dakar, Accra, Nairobi, Cape Town, London and Oxford - for a series of talks and exhibitions taking place in Senegal, Ghana, Kenya, South Africa and London. The aim is to investigate how a ‘digital revolution’ combined with unprecedented city and population growth on the African continent is resulting in new typologies of design.

Ralph Borland's 'African Robots' are on view at Machines Room in London through Friday, September 4. The project will be restaged later this year in South Africa.