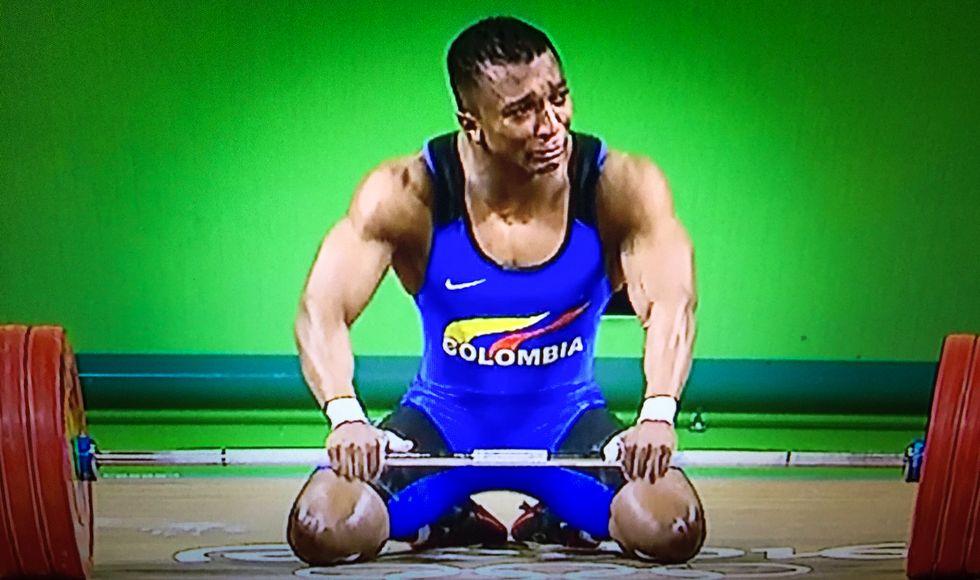 To be a black athlete in Colombia is to be constantly reminded of your otherness. Even when you bring home the gold.

—Colombians on Twitter after their countryman won a gold medal.

On Monday, Colombia was at a standstill for an uncommon reason: thousands of kilometers away, in Rio de Janeiro, Brazil, one of our own was lifting weights. It was Óscar Figueroa, who had won a silver medal in London 2012 and now had a chance for gold.

Right before Figueroa’s third and last attempt at the clean and jerk, Indonesia’s Eko Yuli Irawan tried to lift 179 Kg, but failed. This meant that a gold medal was secured for the Colombian, who had lifted a total of 318 Kg. Still, Figueroa had to make his last attempt.

Knowing he had already won the competition, he failed at his last attempt to lift 179 Kg. He then collapsed and fell to his knees crying and extending his arms in celebration, as the big crowd of delirious Colombians present at the venue cheered him on. Figueroa had just become the first Colombian medalist in Rio 2016.

Capping an astonishing career, Figueroa then removed his shoes, kissed the weights, and then led the crowd in possibly the loudest national anthem singing for non-Brazilian winners in this games. Thus, he was inducted into a very select group of Colombian athletes.

Colombians have now amassed 20 medals in Olympics history, but only two others have won gold: María Isabel Urrutia, who also won in weightlifting, at Sydney 2000, and Mariana Pajón, who won the BMX race at London 2012.

Figueroa and Urrutia also share something else in common, besides their gold medals and their sport: they are both black in a country that tends to qualify the existence of its black population and condition it to the color of their skins.

So, when Figueroa won, social media filled up with celebratory remarks highlighting his race. “Gracias, mi negro hermoso” (“Thanks, my beautiful black man”) and similar phrases became commonplace. This is a welcome positive feeling in a sea of racial insults to black athletes (and black Colombians in general) who happen to make a mistake. “Negro tenía que ser” (“He had to be black”) is often heard at the stadium or at the bar when a black footballer messes up, for example. But it is also indicative of something else.

Not only are black Colombians subject to the instances of racism unfortunately common in many places of the world, they are also seen as not exactly nor entirely Colombian, and are required constantly to prove their worth as an integral part of the country.

As I have written before, Colombia is a racist country that is unable to face this problem because, for the most part, Colombians feel like “race” is not a concept that applies to them. But it does apply to black people, who are then inevitably seen as outsiders.

The most recent national census, done in 2005, asked about ethnicity, rather than race. In it, 3.43 percent of the country’s population identified as “indigenous,” 10.62 percent as “afro-Colombian” and 85.94 percent as “without ethnicity.” It is hard to speak about racism in such a place where “race” and “ethnicity” are largely not a concept. Modern Colombia lacks the vocabulary for it. “Race,” “ethnicity” and “racism” are things that only apply to others, to those who are not part of that “mixed country.”

And those who are outside might find it hard to be welcomed into the majority group. But with the Olympics, a nationalistic, sports-crazy  country such as Colombia can, for a while, welcome everyone, regardless of color, gender or origin, into their team, especially if they look like they’ll fight for some silverware.

It is not an ideal situation, but surely it can help to bring forth the positive representations of black people in national media, and to make them a part of the national conversation. For example, after her medal, Urrutia was elected for two terms to the country’s House of Representatives (to a special seat reserved for black communities). She was also a commentator for the weightlifting events for a TV broadcast. In a different TV broadcast, Diego Salazar and Mábel Mosquera, another two Olympic medalist in weightlifting for Colombia who are black, were analyzing the sport and rooting for their compatriots. Three black Colombians on TV at the same time would be almost unheard of in any other circumstance.

And though sports might not cure the ills black people in Colombia have to face daily, this Olympic run might help in bringing the country closer together and in accepting our diversity. There is still a good outlook for black Colombian athletes: boxer Yuberjén Martínez has at least a bronze medal assured, and Caterine Ibargüen is a favorite in the athletics competitions.