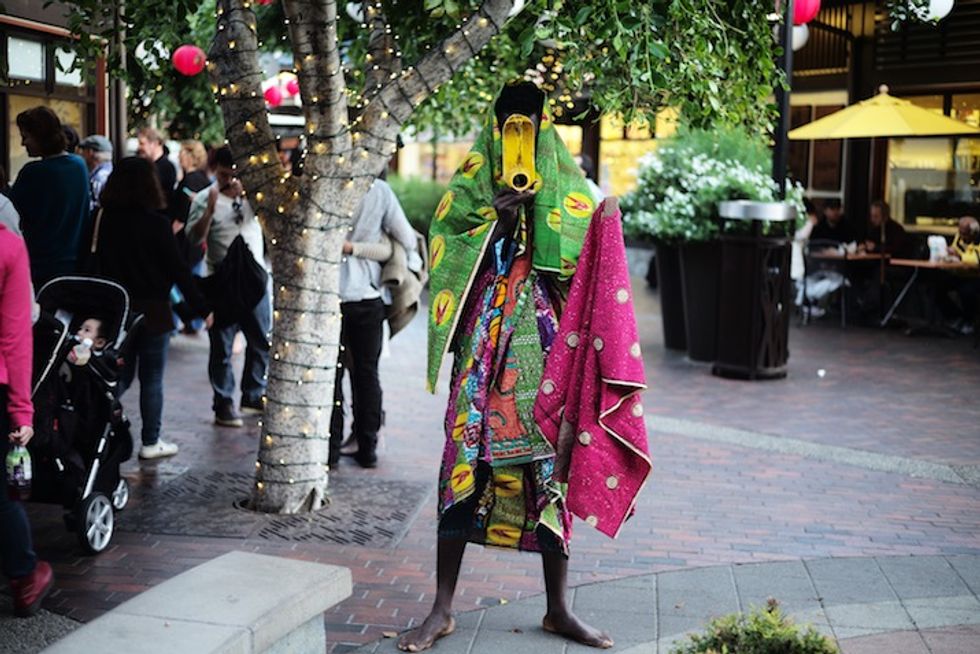 Afrogallonism is a concept created by up-and-coming artist Serge Attukwei Clottey, the founder of Ghana’s GoLokal performance collective. At the intersection of environmental and social justice, Afrogallonism sits as Attukwei’s wondrous experiment with the ubiquitous yellow gallon containers found throughout Ghana. Known as “Kufuor” gallons, after John Kufuor, the second President of the Fourth Republic of Ghana, jerrycans are historically linked to serious water shortages in Accra during his tenure. According to Attukwei the “gallons” originate in Europe, and are brought to Ghana as cooking oil canisters. They are then reused to store water and petrol. Their prevalence in his communities caught Attukwei’s attention, and he began to reimagine the purpose of these objects as part of an artistic movement.

For Attukwei, the containers represent a problem; “The consumption is so high that we don’t even have space to store them anymore. I think it’s become symbolic in human life. So the idea of Afrogallonism is to change their form.” In water-scarce Accra, the gallons provide a means of collecting and storing water. Attukwei repurposes the jerrycans to create haunting masks, murals and public art installations. Along with the GoLokal collective, Attukwei often performs alongside the installations, engaging his community in dialogue on themes of economic, environmental and social justice. Feedback from audiences during performances is something that Attukwei deems essential to the growth of contemporary art in Ghana; “I don’t think that local people are able to afford to go to the cinema. And for me the movie industry is not actually projecting Africa as I want it, as I see it. So I hijack space, I criticize politics, I use myself as an object in my work.”

During the 2012 elections, GoLokal staged a public hanging; Attukwei represented the youth enlisted by political parties to campaign for politicians. Dressed in expensive-looking suits, the rest of the GoLokal crew dragged Attukwei along with a noose binding his neck, arms and feet, flashing money as they went. The performance gained unprecedented publicity, and was played on national news every evening during the following week. Attukwei views the experience as one of the most important he’s had; “It just happened. People feel touched by these performances and they see that art can break barriers. It’s great for me because I see how art can have a creative role in developing a nation.”

Rhythm and costume also play an important role in Attukwei’s vision of Afrogallonism. The artist describes his experience during a ten-day residency in Slovakia as the only black, African person around. Using found objects such as upturned buckets, tin cans, as well as a bunch of coins from Ghana, he added rhythmic elements to an Afrogallonism street installation. The introduction of sound into unfamiliar spaces serves as a means for Attukwei to stay connected to home. In vibrant cloths and attire, Attukwei hits the streets with his works, often engaging in impromptu performances. “You know art is about humans, the galleries create a distance from that. So I’m very challenging about this and make sure that people can come and see the performances so we can really create dialogue. I’m not saying I’m done with galleries but I just want to share art close to people so they can embrace it.” This summer, Attukwei will exhibit Afrogallonist artworks in New York for the first time, as he continues to work toward projecting his futuristic vision of these curious objects.