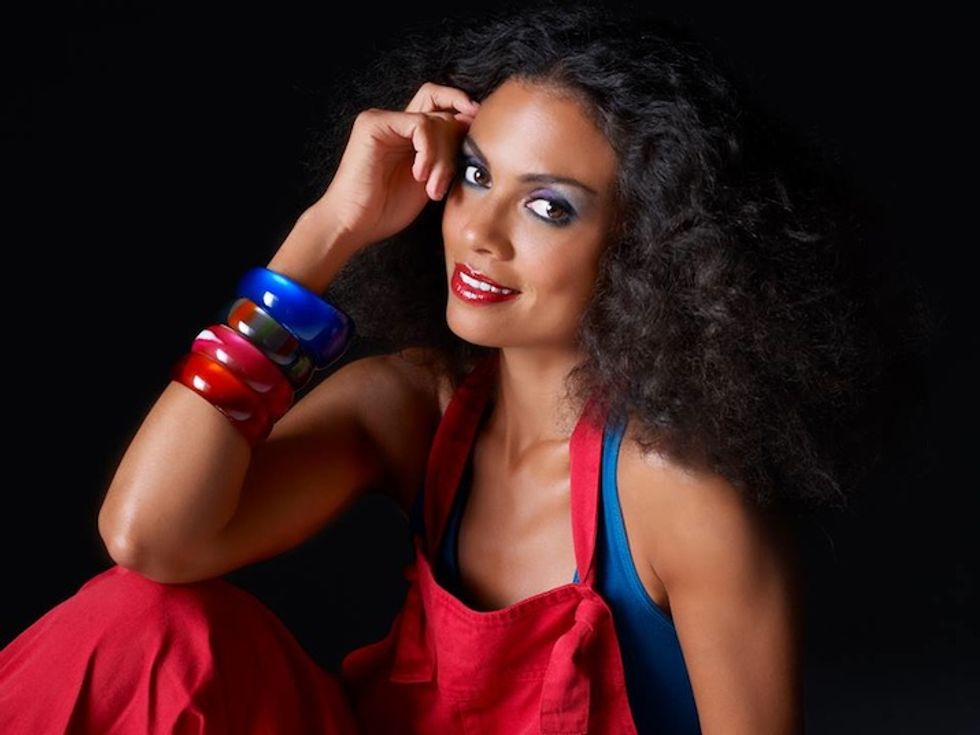 Amel Larrieux speaks ahead of her headlining performance at the 2015 Cape Town International Jazz Festival.

Grammy nominated singer-songwriter Amel Larrieux will head to South Africa later this month to headline the 16th edition of the Cape Town International Jazz Festival. The former Groove Theory vocalist, whose 5th solo album 'Ice Cream Everyday' was one of Okayplayer's Top Releases of 2013, will be joined by the likes of Hugh Masekela and Oliver Mtukudzi, Beatenberg, Thundercat, The Brothers Moves On, Cannibal Ox, and her 20-year-old daughter Sky, who's also part of her band. Okayafrica contributor Nkuli Mlangeni caught up with Larrieux ahead of this year's jazz festival.

Nkuli Mlangeni for Okayafrica: Are you excited about performing at the Cape Town Jazz Fest?

Amel Larrieux: My last two years in high school I went to an alternative school where you could do internships in companies that were interesting to you. And my two choices were the Zomba Music Publishing that was connected to Jive Records, and the Africa fund. That was the coalition that was trying to abolish apartheid in the early 90's. I not only had to work there but I had to also write an essay about it. I was learning about the ANC and all these people involved and wrote about it. And because of this experience I’ve always felt a connection to South Africa and always wanted to go so bad. Although my mom has always been involved in African studies from the horn to West Africa, for me finding South Africa on my own term as a teenager made me feel this affinity.

OKA: Your husband is originally from Haiti. Does he still have family there? Can you speak Creole?

Larrieux: My husband left Haiti when he was 6-years-old. His father brought them to the US and he doesn't have much of a connection to Haiti the country anymore, and most of his family lives in America. He grew up in a Haitian community in Long Island in New York and Florida and he's very much an American-Haitian. He can speak Creole and I can only say a few words in the language. Unfortunately I didn't dedicate myself and take time to studying other languages but I would love to do that in the future when I have more time. One day I would like to go to Haiti for our kids to see and experience that part of their culture.

OKA: Tell us about your style. What influences your look?

Larrieux: Around the time when we shot the "Get Up" video I was designing my own wardrobe and the influence was a combination of my obsession with Tuareg hair braiding, which I was really into. My hair was very long at the time and I would look at pictures of Tuareg women and the incredible beading. But I was also super interested in Afghan tapestry and textiles as well as the hill tribes in Thailand and Burma and there was a line you could connect between the Eastern tribes and the African tribes like the Ndebele women in South Africa with the neck pieces, and that’s why the "Get Up" video looks that way. I was designing the clothes and I would draw things and my stylist helped me source all the stuff, and we put it all together. I love design and personal style and I really enjoy looking at street style photos.

OKA: You recently launched two kid's audio books under your label, Blisslife Records. Can you tell us more about this?

Larrieux: We are publishing children's stories under Blisslife Publishing with my husband, and one of my daughter's childhood friends' parents are involved in publishing and the father has a sister who writes children's books. And they kind of partnered up with us and we published two of her books and the mother of the child is also an illustrator and children's story writer and so one of them is her story. I'm narrating them for the audio books. And they are available on Amazon and iTunes.

I'm getting ready to record two more books. Laru [Larrieux's husband] and I have doubled in writing our own children stories and we even have a treatment for a kiddies children show so will see where that goes. I love to do voices and I've done voice-over work before for cartoons and stuff. I would like to do funny voices and characters but do not want to be like an actress. So this is fun for me.

OKA: What does sisterhood mean to you?

Larrieux: Because of what I know of how black women have been treated since the beginning of all this debauchery, whether it was on the continent or in America, I have this protectiveness of the black female body. So it’s not like a puritanical thing for me where I'm like "oh I don't show certain things," or like slashing women who do that. I say it on one of my songs, we are either thought to hide our curves or other girls are thought to expose them but cannot own them. Like it’s always an extreme, there is never a balance and it’s never our decision. I feel beyond being a mother, having that experience as a girl growing up with this knowledge of what happens to our bodies as black women, and it's the same for black men, the same exploitation that makes me protective of the minds of our youth makes me protective of us as females and of our brothers.

OKA: Tell us about your latest album Ice Cream Everyday. How is it doing over a year since its release?

Larrieux: My projects never really resonate with me until much later on, and when I say resonate I mean like I don’t become aware of what they are doing in the world or how they are affecting people really, until like later when I'm not actively working on it in that sense. And I feel very much like I'm still working on this album, like making sure that people know that it’s out, touring in support of it.

But it is also work and I think that's probably what keeps me grounded in a way. People often say to me "you're so grounded, you seem so normal." And I mean it's true I would never think that anyone would be excited to meet me, or like I don't think I'm going to go somewhere and someone is going to ask for my autograph. I don't wear make-up most of the time so if someone is like "can I have a picture," I'm never ready because I really do think of it in a way as work.