American Dictator: Why the USA Has No Right to Lecture Africa on Democracy 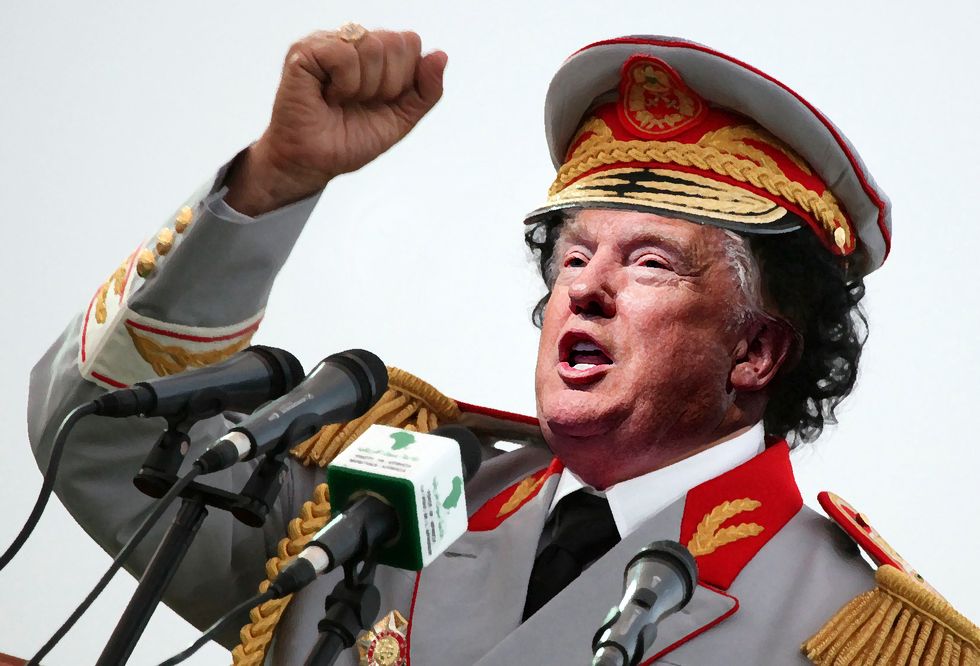 Agunda Okeyo on why American oligarchy is easy to miss, despite the horrors it perpetrates.

Despite its claims, the United States of America is not exactly a great example of democracy. In fact, while pointing accusatory fingers at many African leaders, America is rife with dictator swag.

Oligarchies are nations controlled by a small group of its wealthiest people. The super rich that make up America’s ruling class, are really not that different from what we refer to in other countries as straight-up dictatorship.

As a point of comparison let’s first examine some of the better known African dictators and their origins. In 1957 Ghana emerged as the first African republic to gain independence from Europe and many nations followed suit. The euphoria was short-lived as neocolonialism emerged as the economic, cultural and ideological assassination of African sovereignty. It was our African leaders most imbued with the spirit of democracy that were picked-off first.

The first major post-independence assault on African sovereignty was the assassination of President Patrice Lumumba of Congo in 1961—barely seven months after independence. From 1884 to 1908, Belgium’s King Leopold II, the nation’s first dictator, considered Congo his personal property and siphoned off resources before global pressure made it an ‘official’ colony of Belgium. Leopold introduced rape as tool of war, forced amputation and indiscriminate killings.

In 2011 vintage footage emerged of former CIA agent John Stockwell describing plans to kill Lumumba, who threatened access to Congo’s enormous resources. In the end, America colluded with Belgium to murder the young leader. Lumumba’s ‘replacement’ was U.S. backed Mobutu Sese Seko, a ruthless dictator from 1965 to 1997. Mobutu renamed the nation Zaire, terrorized citizens in the name of ‘unity’ and looted some $5bn.

Jomo Kenyatta, elected first president of Kenya in 1963, ruled with an iron fist. Kenyatta’s people, the Kikuyu, were the first to encounter the land grabbing, bible toting British. Amid the anti-colonial struggle known as the Mau Mau, the educated freedom-fighter Kenyatta was jailed from 1952 until 1961. Upon release Kenyatta colluded with the British. He stole resources, hoarded land, imprisoned allies, disenfranchised citizens, plus assassinated a few folks. Kenyatta remained in power until his death in 1978 which set precedent for similar tactics in later regimes under Daniel Arap Moi, Mwai Kibaki and now his son Uhuru Kenyatta—all dictators.

Recently, Uhuru Kenyatta sanctioned police brutality toward peaceful protesters contesting the electoral commission behind his 2013 re-election. In 2014, employing his billions for British counsel, Kenyatta derailed an International Criminal Court (ICC) case alleging crimes against humanity including rape and murder in the 2007 elections. The apple doesn't fall far from the tree.

Zimbabwe’s president for life, Robert Mugabe now ninety-two-years-old, is arguably the most notorious living African dictator. Mugabe, an educated, militant leader, was elected as Prime Minister in 1980 and later President in 1987 after years of guerilla war and some 10 years in prison. In 1960, he was radicalized to lead an armed resistance after returning from college in Ghana to find his homeland dominated by British supremacists. Like Kenya and South Africa, Zimbabwe was a settler colony where Europeans forcibly resided. Claiming so-called land redistribution in 2002, Mugabe unilaterally pushed most farming whites out of the country. Widespread corruption and incompetence with commercial agriculture squandered opportunities to benefit the nation. In the early aughts Zimbabwe’s currency plummeted and the GDP dropped some 40 percent. Mugabe has consistently stolen elections, committed genocide, abided a 2008 cholera outbreak, and isolated the nation from exterior support. Our only solace are these hilarious viral memes of Mugabe looking ridiculous.

As familiar as we might be with African political dysfunction (often aided by Western interests), American dictators take the cake.

The best way to understand American dictatorship is akin to sociologist Zygmunt Bauman's take on the Holocaust. Bauman asserts modernity via technology and bureaucracy made Hitler’s dictatorship quite different from previous iterations of totalitarian control. The efficacy of gas chambers distanced killers from their victims (like long range missiles or drones), the orderly chain of command removed overt culpability (like military hierarchy or military contractors), and stellar propaganda scapegoating minorities won over the masses (like the ‘war on drugs’ or ‘war on terror’). Modernity sanitized German dictatorship and has done the same in the U.S. Modern American dictators are clean cut, cut-throat capitalists who dabble in military, energy, pharmaceutical, tech and real estate.

Former Mayor of NYC, Michael Bloomberg is a Harvard educated, free-market capitalist. He is a ‘self-made’ billionaire ranking as the 6th richest person in the U.S. and 8th in the world netting $44.2bn. Bloomberg has his own global financial data and media company, his own (anti) gun lobby, and owns real estate around the world. During his tenure as Mayor of New York City he was one of the few people to gain wealth during the economic downturn, artificially raised property values; oversaw an unprecedented rise in homelessness, touted the NYPD as the seventh biggest army in the world, changed the constitution of the city to seek an unprecedented third term and even attempted to give the public school system to a publishing executive. Bloomberg is a quintessential American dictator.

Remember President George W. Bush, Vice President Dick Cheney and former Secretary of Defense Donald Rumsfeld—aka the Axis of Evil? Try following this: Bush knew Cheney from his time working with his father President George H.W. Bush as Secretary of Defense during the first Gulf War in Kuwait. After his tenure with that administration ended, Cheney was chairman and CEO of oil giant Halliburton Company from 1995 to 2000. Halliburton was a beneficiary of major oil contracts during the first Gulf War and the War in Iraq. Similarly, before political office, George W. Bush worked in oil exploration with ties to investors linked to the Bin Laden family. Donald Rumsfeld, initially with the Ford administration from 1974 to 1977, returned to the private sector as a pharmaceutical and tech company CEO until his appointment as Secretary of Defense in 2001. However, throughout the 1980s Rumsfeld served in special posts under President Reagan, including Middle East Envoy meeting Saddam Hussein in 1983. George W. Bush, Cheney and Rumsfeld are all culpable for igniting the "war on terror," Guantanamo Bay, the Patriot Act, and war crimes like Abu Ghraib. Not to mention, gross military spending, increased deregulation and codling the rich towards the 2008 Financial Crisis. Finally, Bush stole the election from Al Gore in 2000 in a CLASSIC dictator move—pregnant chad my ass!

As bad as the aforementioned ‘axis of evil,’ the Koch Brothers are no better. The elder brother Charles serves as Chairman and CEO of Koch Industries, the second largest private company in the U.S., and David as Vice President. The brothers inherited the assets of Koch Industries from their grandfather and father, Harry and Fred. Notably, Fred, an MIT graduate in engineering, earned a great deal of his fortune ‘cracking’ crude oil in Stalinist Russia—eek! By 1952, Fred reignited business stateside with Rock Island Oil & Refining until he died in 1967. He then willed the business to MIT educated Charles—enter Koch Industries.

Charles and David joined forces to swindle their two brothers, Fred and Bill, and control the company outright. As CEO, Charles ran Koch Industries like a gambler until 2000 increasing the company pipelines from 3,000 to 37,000 miles; violating every regulatory and environmental law imaginable. They were fined by the millions to no avail. Finally, in 1999, Charles and David were deemed responsible for the 1996 incineration of two Texas teens resulting in the then largest judgment of its type at $296 million.

Afterwards Koch Industries reigned it in. Now holding only 4,000 miles in pipelines, following more regulations and boasting a combined wealth of $86bn, the brothers can fully fund any libertarian agenda they desire. Wetting their whistle in the 1980 election when David ran for VP of the Libertarian Party, today the Kochs are pros. They fund conservative think tanks, buy candidates, fund dystopian education programs, meddle with the electoral college and, wait for it…are THE powerhouse behind the Tea Party! So then, who exactly is to blame for Donald Trump? Hmmmm?

The November 2016 elections will be a powerful indicator of how big a picture Americans are seeing. The masses are justifiably angry about the economy, infrastructure, civil liberties and eroding security. Some might argue the stakes are higher today given the global refugee crisis, extremist insurgency, and climate change. However, this is the moment where the big picture matters most. If voters can reflect on where this country has been and the role it has played in the world, only then will the path forward be clear. And clearly, we need less dictatorship and more democracy all around.