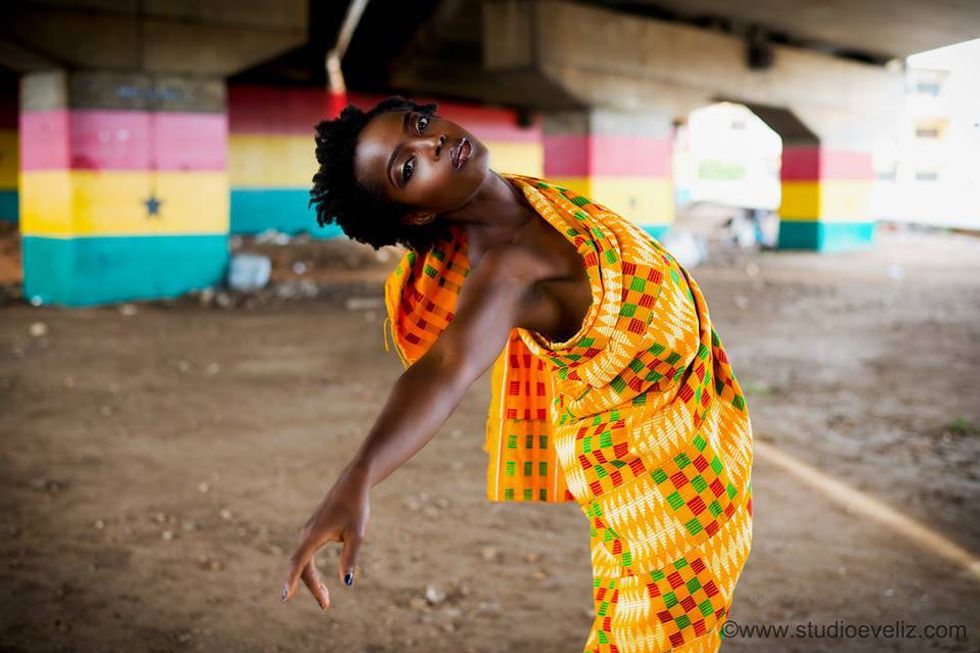 Okayafrica caught up with 'An African City' star MaameYaa Boafo on the heels of the show's first season finale.

OKA: Your character, Nana Yaa, seems to me, to be the ‘Carrie’ of the show? Would you agree? What are the similarities between you and Nana Yaa?

MaameYaa:An African City has been compared to Sex and the City. I think people say that often because of the voice-over factor, but Nana Yaa and Carrie are different. They have different careers, different backgrounds and are in different circumstances. As for Nana Yaa and myself, we both have journalism degrees and our mothers would prefer our hair to be permed and we embrace our culture. Unlike Nana Yaa, I do speak Twi while Nana Yaa is now learning.

OKA: You are an actress living and working here in NYC. Can you speak a little on the backgrounds of each of the ladies on the show? How did the ensemble come together?

MaameYaa: Currently I'm the only one in NYC, Nana Mensah is in Texas but I met her in New York and have done some theatre work with her and she comes back here often. Esosa E has relocated to Los Angeles but we've been in some New York projects together. We met on the set of Andrew Dosunmu's Mother of George. Nana and Esosa actually were in the same acting program together in New York. Marie Humbert and Maame Adjei are the real returnees (to Ghana) of our group- lucky them! Nana, Esosa and I flew together and met Marie and Maame for the first time on the day of our fitting. We all immediately fell in love with each other.

OKA: Would you consider moving back to Ghana permanently? If so, what would you pursue?

MaameYaa: I would definitely like to be home and be based there. I'm convinced that will happen one of these days so I'm not rushing anything. I would continue to live as an artist preferably in Accra as well as be active in my hometown of Kumasi. Sky's the limit.

OKA: Is it important to you and the creative team that all of the ladies in the show be of African descent?

MaameYaa: Absolutely. This story is about African Women- it's not often that you see a show where all the main characters are African. I'm very grateful to Nicole for doing that. Some of us are actual returnees and some are not but we can all identify with being African whether or not we’re considered "African enough" according to the opinions of others.

OKA: Tell us about shooting on location? How long were you all in Ghana? How did the people of Accra feel about you all being there shooting? Was there a general excitement in the city?

MaameYaa: We shot for a month and some of our locations were private so not many people knew. There were rumors of AAC being shot but we got to enjoy our privacy while we were shooting season 1.

OKA: Who are you hoping to reach with this webseries? What impact do you think it will make?

MaameYaa: I'm hoping to reach people who still see Africans in a one dimensional way. I hope to educate them. People who STILL have no clue that there are different kinds of Africans- Afropolitans, Returnees, Africans with foreign accents- nonetheless Africans. I'm hoping to reach young women who can learn from the choices our characters have made, step out in faith, come home, fall in love, mentally prepare for power cuts and other welcome home surprises. It's rewarding to hear fans say thank you to Nicole for creating ACC.

OKA: Tell us more about the issues that you hope to bring awareness to with the show?

MaameYaa: What Nicole did for season 1 was introduce the world to current events back home ranging from HIV/AIDS, expats, the skyrocketing apartment rental rates, views on traditional weddings vs. white weddings and more in thought-provoking ways through comedy as well as drama. What has happened in return are viewers starting debates and raising new questions. My hope is that these questions will continue and we can team up with non-profit groups concerning these issues to bring more change rather than just awareness. The response has been great! I love it when young women tell me that they are inspired by seeing professional African women with careers and that they too want to return to their respective countries to make a contribution and pursue their careers.

OKA: What has been some of the greatest experiences you have had while working on this show?

MaameYaa: For me, the greatest experience was being on set everyday. When I was a student in the States, I was known as the Ghanaian who studied acting. (instead of following the stereotypical route of Ghanaians who study economics, law or medicine) So to be back in my home country as a working actress using my degree, it was so rewarding. I felt like all those grueling hours in grad school and student visas were not in vain.

What are your hopes for the future of the show? When can we expect season 2?

MaameYaa: That we continue to blaze this trail as we go deeper into issues concerning what goes on in Ghana, how we break stereotypes, how we grow as women who have an unbreakable sisterhood. That being said, all I'm going to say regarding season 2 is stay tuned

OKA: What’s next for you? Where can we find you online?

MaameYaa: Next, I'll be shooting some film projects this spring and summer with some directors I'm super excited to work with including Akosua Adoma Owusu. Season 2 of An African City is also likely to be announced soon so stay tuned! You can find me on instagram and Twitter as MaameYaaBoafo.

Check out the entire first season of An African City and head here to learn more about the cast and creative team behind the show.