Angola: Birth Of A Movement 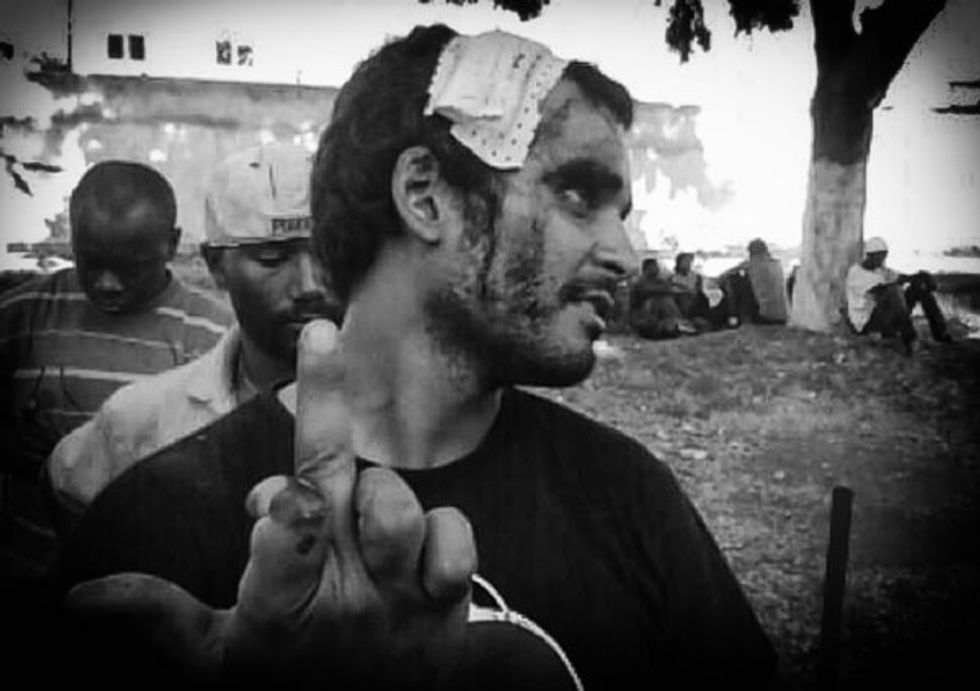 President José Eduardo dos Santos and his MPLA party have ruled Angola since the country's independence from Portugal in 1975. Once a staple independence movement in Southern Africa, the MPLA now champions a small group of ruling elites who control the state's private and public sectors while simultaneously suppressing any dissent or protest from the majority of the country's poor, who live on less than $2 a day. Over the course of 2011, a group of brave citizens - all affiliated with Angola's underground rap scene - began organizing some of the first protests against the MPLA Angola has ever seen. Al Jazeera English's new documentary "Angola: Birth of a Movement" captures those first moments of outspoken individuals after decades of silence. We talked with filmmaker Ana de Sousa about documenting this important time and what she envisions for the future of the movement. Watch the full film above and read our interview below.

OKA: What is the primary focus of Al Jazeera English's Activate series?

AdS: The idea of Activate since the first series has always been to go to the roots of burgeoning activist movements all over the world; we’re looking at grassroots movements that aren’t necessarily making the headlines yet, but who are determined to fight for their rights and whose struggles are linked to the larger, global themes– for example land, housing, Indigenous rights, freedom of expression.

OKA: How did you find your characters for the film (Luaty AKA Ikonoklasta, Mbanza, and Carbono)?

AdS: I had been following events in Angola for a long time when the protests erupted in 2011 and a few names kept appearing – Luaty, of course, is the most high profile outside of Angola, but Carbono and Mbanza have played important roles too. In fact the idea was to observe a few of the many activists in the youth movement without suggesting that they are the only three. There are lots of inspiring, dedicated young people in Angola who have been part of the movement so far. But clearly Luaty, Mbanza and Carbono are an interesting trio; each from a completely different social class, they probably would not have crossed paths if it hadn’t been for music and politics. I found that really interesting.

OKA: What was the most satisfying, or greatest moment while making the documentary?

AdS: When I was last in Angola in 2008, people very rarely talked about politics or gave their opinion of the government or the President. But in 2012, a year after the first protests, things were completely different. We heard people speaking their minds all the time, and that change made a huge impression on me. To hear two hundred Angolans roaring “Viva A Revolucao!” (long live the revolution) as loud as they could in a public hall, was astounding to me.

OKA: What was the most difficult moment?

AdS: Filming the UNITA protest which comes at the end of the film was challenging; in the end it was fine, but we were not at all sure what to expect as the protest came close to the elections and amid some uncertainty. Also, a lot of people have mixed feelings about cameras and foreign journalists – and sometimes you have people walking in front of the camera, looking down the lens when you’re recording, and then telling you to delete their picture!

OKA: The film shows how police forces have violently oppressed the movement, how safe was it to have cameras there?

AdS: That’s a difficult question to answer. There have been hardly any current affairs documentaries made about Angola [I think there are two] by foreign news channels in the last 10 years, so there wasn’t much previous information for us to go on – we just trusted our instincts. Nothing happened to us, and we were never threatened, but we were reasonably cautious. There were a fair number of foreign journalists in Angola during the elections, and overall I think the Angolan authorities respect the international media and their role, although there have been some inflammatory articles in the state media (Jornal de Angola) about a few specific correspondents and articles, which is worrying. Overall I think attention on Angola is growing, so time will tell how the authorities deal with that.

OKA: The movement in Angola is so important, yet seemingly still small, where do you think the movement will be in 2+ years?

AdS: I remember Luaty saying “Lots of people who hear about us and see pictures of our protests are probably thinking this is just half a dozen kids; but you have to understand that to overcome all the fear that was so huge in the minds of our elders, and to go out for the first time to protest [on 7th March] at midnight, thinking we might die – that took a lot of determination. And what happened next was unprecedented in Angola.” I think Luaty puts it really well; the youth movement have broken a cycle of fear and now people feel more free to protest and speak out than they had for decades. That was a huge achievement in itself. Where it will take them, and what they will do with it, I don’t think anyone knows. I suppose that depends a lot on how the government, the president and the ruling elite deal with the demands of the youth and the people who are joining them - from all sections of society.

*In July 2012 we interviewed Luaty AKA Ikonoklasta about why his government beat and framed him. Go here to see the full story.