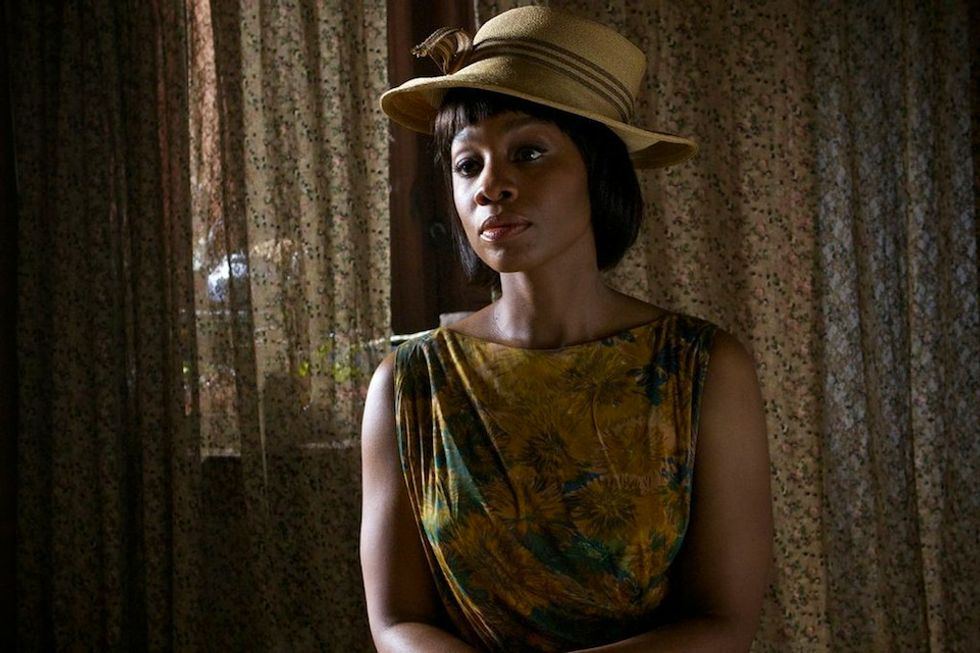 In an Okayafrica interview exclusive, Anika Noni Rose talks the film adaptation of Chimamanda Ngozi Adichie's 'Half of A Yellow Sun.'

With a slew of iconic roles to her name (Tiana in The Princess and the Frog, Lorrell Robinson in Dreamgirls, Emmie Thibodeaux in the Broadway production of Caroline, or Change, and currently Beneatha Younger in a Broadway revivial of Lorraine Hansberry‘s A Raisin In The Sun), Tony Award-winner Anika Noni Rose is well on her way to cementing her position as one of the greatest actresses of our time. Besides already making history as the voice of the first black Disney Princess, Rose’s legacy will also stem from her ability to embody the vulnerabilities and strengths of the characters she plays on stage and screen in ways that resonate with audiences years later. Her latest role on the silver screen is in the motion picture adaptation of Chimamanda Ngozi Adichie’s bestselling novel, Half of A Yellow Sun, in which she plays affluent, silver-tongued Nigerian socialite Kainene.

Okayafrica caught up with Rose ahead of Half Of A Yellow Sun's NYC premiere at the New York African Film Festival, and in a candid phone conversation, she shared her thoughts on being offered the role of Kainene, the consequences of suppressing history and the need for more diverse visibility in mainstream media.

Jen for Okayafrica: What was your reaction to being offered the role of Kainene?

Anika Noni Rose: I was absolutely thrilled. I had read the book so I was familiar with the story, and I loved it. She was my favorite in the book and so I was extraordinarily excited.

OKA: What was the most challenging part of bringing Kainene to life and how did you prepare to fully immerse yourself in the character?

ANR: Well, I was in Calabar for two months and that was pretty much full immersion. But I think that probably the most challenging part was the fact that my dialect was different from everyone else’s in the film. I didn't have anyone else around me speaking in the actual dialect I was using. Even though I had some Brits around me, they didn’t really speak the same way that Kainene was speaking in that time period so I was sort of talking alone in that way.

OKA: Being that Half Of A Yellow Sun is one of the few instances where the Biafran War is presented to the world on such a massive scale, did you ever feel burdened by some sense of historical responsibility?

ANR: I didn’t feel burdened. I was pleased that I was able to be a part of bringing this story to the world in a wide release. You know, there are so many stories that need to be told, deserve to be told and aren’t. So I was very happy to be a part of this and I felt safe in a way because this is Chimamanda Ngozi Adichie’s history. The director/screenwriter [playwright Biyi Bandele] is also Nigerian and was there for part of the Biafran War and had experienced that so I felt like I was surrounded by the truth of the situation. It wasn’t like I was doing a film where everyone is an outsider and you’re jumping in and trusting your research and their research and then hoping for the best. Sometimes it works out because people are extensive in their research, but there is a different feel of safety when you are surrounded by people for who that was a part of their history and they feel extraordinarily responsible to it and to their parents and to the legacy of all the people that were lost and all of the people that made it and pushed through and survived.

OKA: Going back to what you were saying about how certain stories are never told, what are your thoughts on the Nigerian film censorship board’s current delay of the theatrical release of Half Of A Yellow Sun despite the fact that the novel was highly celebrated in Nigeria upon publication?

ANR: Well, I think it’s supremely unfortunate. Nobody wants their dirty laundry to be aired out, however that’s not all that this story is and there are lessons to be learned from history. When we suppress it we put ourselves in a position to be on a path of repeat, so I think that’s it a dangerous thing when we suppress history. As well as disappointing and unfortunate, it's dangerous.

OKA: In a recent piece for The New Yorker, Chimamanda Ngozi Adichie penned her thoughts about the delayed release, stating, “Many of Nigeria’s present problems are, arguably, consequences of an ahistorical culture.” What was the reaction from the residents of Calabar during filming? Did some people seem reluctant to discuss it?

ANR: If you weren’t speaking to specific people who felt open about it, it was hard to find the history of the Biafran War right there in Calabar. There were bits and pieces but it’s not like there was a museum dedicated to that. All of the people I spoke to about it were open to discussing it, but many of these people were extras on the movie. However, I found that the people of Calabar were very excited about the making of the movie and about their history getting ready to be told so that’s a bit of an oxymoron. It’s a difficult thing, you know, the excitement of  ‘Oh, our story is finally being told, and its being told by one of us’ when there are people on the other side who are like ‘Oh my god. Don't let the world see.’ I don’t know who those people are because I didn’t meet them while I was there, but apparently they are a part of the censorship board (laughs).

OKA: Do you tend to gravitate towards roles where you get the chance to tell the stories that haven't been told yet or might be forgotten?

ANR: I’ve been lucky to be able to tell this story. I think that a lot of the work I've done has been somewhat contemporary even if it’s a period piece. I also think that history is much shorter in the US and has been suppressed and cleaned up and prettied in its own way here as well which is unfortunate. When you look at the history books, the history of Black America is not only extraordinarily truncated but extraordinarily whitewashed. And that is a severe disrespect, and an unfortunate situation. Unfortunate doesn't seem strong enough but you know it’s a rewrite. They’re trying to take the word slavery out of history books

OKA: As though it were just a blip.

ANR: Yeah, as if it didn’t happen. As if ’indentured servitude’ covers what happened. And that’s laughable. It’s laughable if they weren’t so serious about it.

OKA: Growing up, how important was learning about your history and your roots instilled in you?

ANR: My parents were very active in making sure that I was aware of my history not only as a black American, but also as a person of the African diaspora so that I was able to take in many other people’s histories and know that though they weren’t directly connected to me that does not mean that we do not share a link.

OKA: You’ve spoken before about the lack of diversity in the way mainstream media portrays African American women and in your Twitter bio is a list of all the varied roles you’ve played. My favorite thing about the list though is that you sum it all up with Disney Legend in all caps. Could you speak on the need for visibility and representation especially for young girls of color?

ANR: I feel as though I speak about it all the time. You can’t erase people as much as you try. Lately I’ve been talking about the lack of people of color in children’s literature and fantasy and that is major. I don’t think that people think about it a lot, but when you remove a child’s face from fantasy you've stumped them whether they realize it or not because that is the interruption of a child’s dream. That is telling a child that you are not allowed to dream the same way.

ANR: Mmhmm, you weren’t here before and you won’t be here later. And both of those things are fallacies. If there was an elf, they would lead. If there’s a role for a wood sprite, sure as hell there’s a role for me. I think that it is very important for editors to realize that a story that may not feel relatable, and I use that word loosely, to them because they don’t see themselves in it— and what is the irony in that— does not mean that the story is not worthwhile and will not make them money. People want to read about themselves and about their friends. They want to read about their families, and none of those things at this moment in time are homogenous.

OKA: Several of the characters you’ve played have all been involved in some form of physical or emotional turmoil. Do you engage in any particular methods of self-care to make sure Anika is still present at the end of the day?

ANR: I go to the gym. Actually the show I’m doing right now is so physical I have to limit working out because if I did go 3 or 4 times a week, I’d disappear. Everyone would be like, ‘Where did she go, that’s just a head and feet.’ I meditate. I make Mondays, which is my one day off when I’m doing stage work, sacred. I don’t have appointments planned and I can wake up and rub my feet together any time that I need to or want to do that. I think that’s one of the most important things. Also, I have friends that don’t do what I do, praise God! In truth, I don’t want to talk about what I do all day everyday. It’s exhausting. You know, I’m like ‘What did you read though? Not a script! No! What did you read?’

OKA: Ok, so tell me what was the most interesting thing you did today that didn’t have anything to do with film or the stage. Tell me about your life.

ANR: Well, my day has been very short so far and it’s about to get very long. I had two shows yesterday so I woke up about 20 minutes before I spoke to you. I am getting my bathroom painted though which is really exciting! I’ve had my apartment for 7 years now, no… 9 years, and I’m finally getting the bathroom painted!

Half Of A Yellow Sun hits US theaters May 16th.