The Anti-Olympics Guide To Rio By IOIA 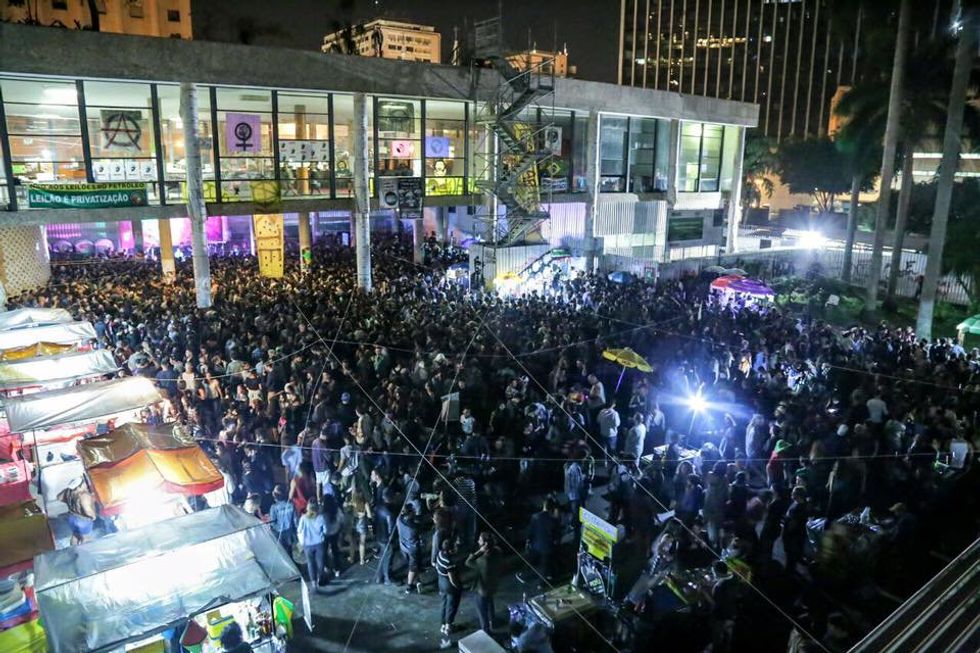 There's another side to the Rio Olympics that doesn't get covered on TV.

We've previously talked about the issues that should have you questioning the Rio Olympics, from an increased police presence in the favelas to the lack of payment for competing athletes.

Read through IOIA's selections and their explanations ahead.

"The Ocupa MinC is a movement born this past May after the interim government cut the Ministry of Culture, which was created in 1985. This was one of the first moves of the interim president after the removal of President Dilma Rousseff in her controversial impeachment process.

Since then, groups of artists and social movements have begun occupying buildings of the Ministry of Culture in Brazil demanding the departure of interim president Michel Temer. In Rio de Janeiro, the occupation took place in the Capanema Palace where lectures and historical presentations of various collectives and artists like Caetano Veloso and Seu Jorge, as well as parties, have been held.

Days before the start of the Olympics, the building was vacated by the Federal Police, and since then, the protesters have occupied the Canecão, an abandoned concert hall in Botafogo. This new phase of Ocupa MinC started with Chico Buarque leading the movement in the chorus of "Apesar de você," a samba protest that the singer composed during the former period of military dictatorship. The Ocupa MinC will continue performing shows, exhibitions and lectures throughout the month of August."

"The Solar dos Abacaxis is a cultural institution located in one of the most important Neoclassical buildings in Rio de Janeiro. It aims to bring alternatives that relate through the miscegenation of various cultures.

The house has organized itself with a program of activities that occupy various public buildings and bring issues like refugees and migration to a collective reflection. In addition to debates and workshops, every Thursday "Manjar" takes place, an experimental exhibition platform with works by Brazilian artists. It's followed by music, drinks and bar food made by immigrants and refugees."

"The Gentil Carioca is a contemporary art gallery located at the intersection of the Rio de Janeiro Historical Center in the Sahara Market region, the largest open air market in Latin America.

Conceived and managed by artists, it's a unique area in Brazil that goes beyond just being an art market, with the purpose of thoughtful reflection, experience, education and celebration. The "Abre Alas" is a group exhibition of young artists that takes place every year during Carnival and has become a tradition that several artists have participated in over the years.

One of its most entertaining presentations is its anniversary celebration, a part of the gallery's annual calendar of events, when the street is closed to set up a stage for concerts, performances, and cake sculptures, with an opening exhibition in the big house."

"Opened in 1914, this huge popular market, considered part of the cultural heritage of the city, is home to the largest concentration of religious articles in the city—especially those related to spiritualism of African origin like Candomblé and Umbanda. You can also find herbs for ritual baths, cheap party decorations and even live animals."

"One of the most important venues of Rio de Janeiro, Viaduto de Madureira is located underneath of the Negão Viaduct in Lima Madureira in Rio's north zone. It has a rich history in the construction of black identity through music, dance and style.

The venue started as a Carnival block party more than 25 years ago and still hosts the “Baile Charme” party every Saturday. Charme is how Brazilians refer to R&B."

"During his visit to Brazil, the French painter Debret described it as a "juicy and tasty delicacy." The dish, Angu, is made from corn flour cream and less noble meat and was brought to Rio de Janeiro by African slaves.

Angu do Gomes preserves this traditional recipe. It's found in Zona Portuária, one of Rio's ports where the slave market was located during the colonization of the country, It's also the location of the oldest “roda de samba” in Brazil."

"David is a former fisherman with entrepreneurial spirit who created one of the city's best restaurants in the garage of his house on the hill. David has created several recognized and awarded dishes and snacks, such as the seafood salad and seafood bean stew. Despite the local popularity, the prices remain very reasonable."

"This is a space dedicated to the celebration of the cultures from the north and northeastern regions of Brazil. It's super popular and has 4 stages where simultaneous northeastern music concerts can be held. It also has many restaurants with typical food and shops with tapestry and crafts."

"The Tacacá is a kind of indigenous soup from the Amazon region of Brazil, prepared with the sap of cassava "Tucupi" Jambu, an herb that causes a tingling sensation on the lips and tongue because of its anesthetic qualities. In northern Tacacá it is also possible to sample other dishes, drinks and beers typical of the Amazon region."

"Takes place every Sunday on Avenida Augusto Severo, which used to be the sea before the site was grounded. It's a great place to experience the colors, smells and flavors of Brazil, and has one of best tapiocas in Rio, a kind of arepa made from cassava flour."