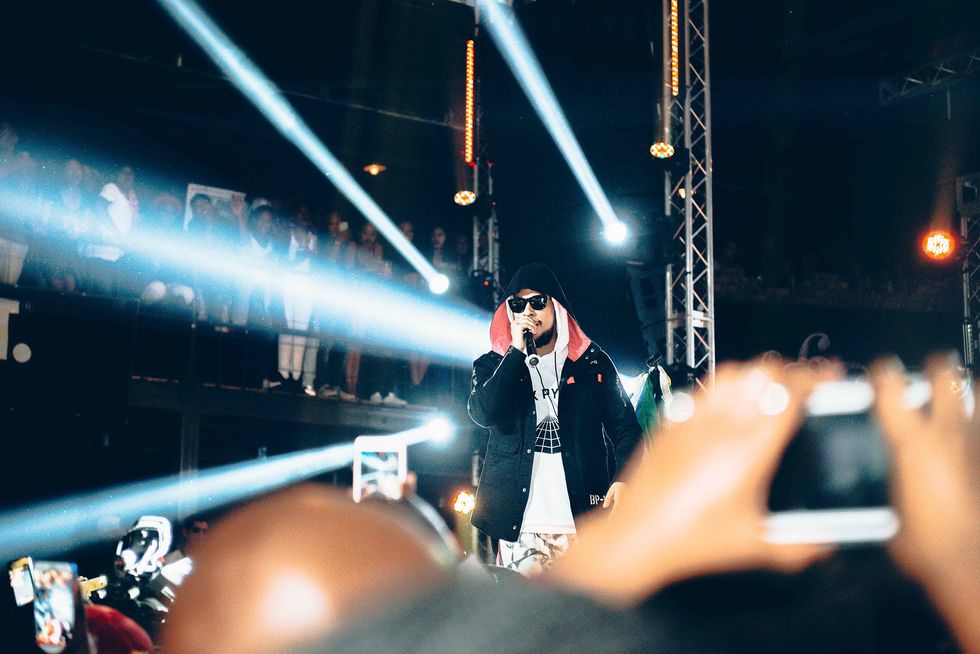 AKA. Photo by Austin Malema.

"I've done two campaigns for Ciroc with Cassper Nyovest," he says, listing some of his accolades that not many of us are aware of. Right now, at his apartment, he is seated in front of his iMac where he is retouching a photo and sending an image of an album cover he is working on.

The past three or so years have been busy for the photographer. His recent portraits of the winners at the South African Hip Hop Awards (SAHHAs) in December went viral and he was the official photographer for all three of Cassper Nyovest's Fill Up concerts.

He was also the official photographer for Capsule SA in September last year. He shot one of AKA's The Supa Mega Show concert series and Riky Rick's performance at the South African Music Awards (SAMAs). He has also been shooting covers for the online magazine The Plug, which has been covered by artists such as Da L.E.S, Stogie T, Nasty C, Cassper Nyovest, Moozlie, among others.

YoungstaCPT at the SAHHAs. Photo by Austin Malema.

But how did he get here?

As much as, while growing up in Venda, he fell in love with photography because of a relative who would take pictures of his family, Malema started out professionally as a videographer.

"I worked in TV for about three years from 2014, and got bored," he says, and, after, gives a naughty laugh, as if finding the idea of having worked in TV a ridiculous one. Skeem Sam, Selimathunzi, The Queen, The Real Jozi A-Listers, are among the shows he worked in all while freelancing as a photographer, shooting campaigns with the fashion blogger Siya Beyile for his website The Threaded Man.

"I was already popular on Instagram because of insta walks and just taking cool pics. I was also shooting with a couple of my friends," he says.

In mid-2015, Malema quit TV to be a full-time photographer. "I remember missing an opportunity to shoot for an airline when I was still working for The Queen," he says. "I was like, 'damn, this is a big opportunity that you just missed.' And I was like, damn screw it, I feel like I'm missing so many opportunities."

"Then comes 2016," he continues, "Siya and I work on a couple of things, shooting the SAMAs, Dineo Moeketsi becomes one of my clients, and then from there on… I don't know… a lot happened."

Because of social media, he got (and still does) most of his jobs through referrals, but admits sometimes he does reach out to clients. "I think most of the events that I've shot, it was through other events that I've shot before. Sometimes I do ask. Like, for instance the SAHHAs, when we did the portraits for the winners, I asked because I had seen that no one did that in South Africa. Artists just go to an award show, you win and you're done. There's no celebration, no moment."

Moments are what he likes to capture the most, which explains why he enjoys shooting live performances more than anything else. Even if it's a posed photo, he tries his best to create a moment.

"Something that I learned recently," he says, "and I've been doing in every portrait session, is to get to know the person before taking the picture. Or take the picture during conversation. Just so we get the emotion. It's not about telling [your subject] what to do. You can tell what's fake when you look at a picture, like that person was told to smile."

Cassper Nyovest for The Plug. Photo by Austin Malema.

As much as Malema does take pictures of artists of all disciplines, rappers are more prevalent in his work. He admits, however, that his relationship with hip-hop isn't "that deep."

"I love SA hip-hop," he says. "It's doing really great right now. I, however, have a relationship with the artists. Most of these guys started out almost around the same time [as me]. I worked with DJ Speedsta about four or five years ago."

Those relationships he has kept since then, he says, make it easier for him to reach out to artists now and offer his services. "Cassper," he says, "I met just before he released 'Gusheshe,' but unfortunately nothing ended up happening at the time. But later on, it became a thing where I could become his photographer for Fill Up."

Riky Rick at the SAMAs. Photo by Austin Malema.

Currently, almost every big South African rapper has a personal photographer, who is responsible for their Instagram feeds looking like money.

"In terms of popular culture," says Malema, "we made it cool to have a personal photographer. Like, I remember, one of the first guys I worked with was DJ PH, in 2013, when I was still a lecturer at AFDA. He flew me down to Cape Town, and I filmed his performances. And then only later on, Bash became Cassper's photographer."

He reveals at a point in his career, he also wanted to be one rapper's photographer. "It's when people see your tag on one artist's Instagram, then everybody started following the trend. Last year it caught on, but this year, every major artist will have a photographer. Because it's worth it. It's becoming an investment on your profile and to yourself as a business."

He makes an example of the rapper Riky Rick.

"When Riky started working with YeahLenzo," he says, "I might be wrong with the numbers, but he was sitting on 400k [followers]. And they started creating content that was based on [the song] 'Sidl' ukotini,' and that's when he started wearing Gucci everywhere he went. His profile looked like a look book. Then what happens? He goes to Fashion Weeks, it still looks like a look book. Now he's influencing people in terms of fashion. There was nothing about his music on his profile at that point. But the profile said sidl' ukotini."

The photographer attributes the rapper gaining more followers and being invited by Gucci International, to the work Riky and Lenzo did. "All these things happen because you've packaged yourself a certain way," he says. "If you package yourself as a fashion icon, people will see you as a fashion icon. He got featured on international websites because of that."

Asked if, beyond ad campaigns and photos posted online, he would like to explore other mediums, say an exhibition, he's not sure.

"People do exhibitions, but I don't think I'm there yet," he says. "I've got the pics of some the biggest artists in the country, but I don't think it's something I wanna put out. I might put out a book about how some of the pictures came about. Some, it took 30 seconds to do a particular photo because the subject didn't have enough time. Or it took me four hours waiting for a particular artist to show up."

What he's sure about, though is that he wants to shoot more advertising campaigns. "Recently, I worked on a Domestos campaign," he says. "I'm working on a pitch for another big brand now. I also have some work with Destiny [magazine] that's coming up, but I'm trying to stay away from the print media space. I make more money working for myself than working with media outlets."

Asked if he has any advice for photographers who want to follow in his footsteps, his answer points to professionalism: "Take your business seriously. I have someone who does my paperwork for me–my taxes and invoices. You are not just a photographer, you are a business."