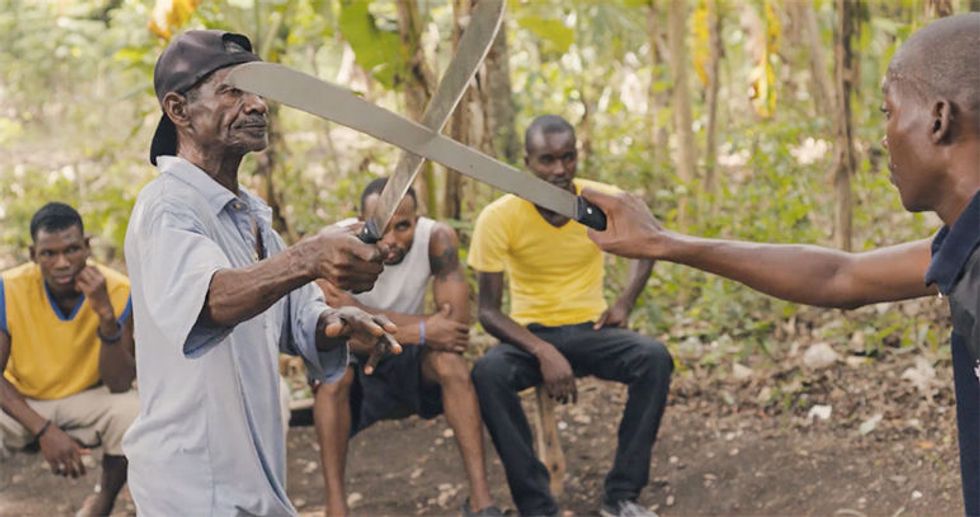 The Jason FitzRoy Jeffers-written and executive produced documentary sheds light on the veiled history of the machete fighting technique in Haiti.

Black August marked the 212th anniversary of the Haitian Revolution of 1791 to 1804 led by Toussaint L'Ouverture—the only successful slave rebellion in modern recorded history.

Thus Haiti became the first independent Black republic in the world. However to this day, France forces Haiti to pay an "independence debt"—or reparations—totaling billions, to compensate long-dead colonists for the slaves who had won their freedom from Napoléon Bonaparte.

It is from this rich legacy that short doc Papa Machete, written and executive produced by Jason Fitzroy Jeffers, introduces us to late tire machétt master “Professor” Alfred Avril who taught his fighting technique, often guarded in Haiti, to a select few.

“I don’t use this gift to kill people, but I have it,” Avril reveals in the film. “So if you attack me...Understand? You’ll be in a bad way. If you are cut, the blood will flow.”

The short, boasting lush cinematography, paints a picture of Avril who instructs on the practical and spiritual nature of the machete, especially valuable for Haitian farmers like himself, according to the press release. Through his efforts to provide for and educate all eleven of his children, Avril demonstrates his allegiance to Haiti. His sons Roland and Jean-Paul, both accomplished machete martial artists, carry forth into the future the memory of Avril and Haiti’s victorious past.

A passion project of Jeffers, and organized by a collective of Miami and Brooklyn-based Caribbean creatives, the film festival spotlights eight features and nine short films.. If you’re in Miami, be sure to check it out, running from Sept. 29 until Oct. 2.

And, of course, view Papa Machete at the top.