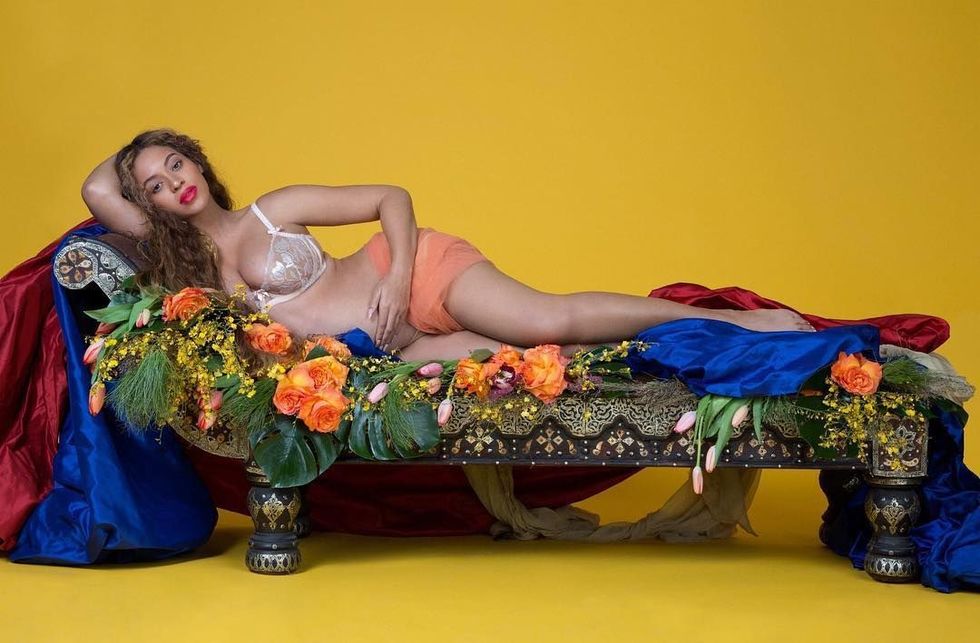 Unless you've been residing under a rock, by now, you've heard that Beyoncé is pregnant with twins.

She shared the news of her pregnancy yesterday with a portrait of herself in front of a floral backdrop with green mesh adorning her head and stomach. Today, she released the full maternity shoot, and the rest of the pictures are just as stunning.

The striking viral photos are the handiwork of Ethiopian-American photographer and conceptual artist, Awol Erizku, who's long been on our radar thanks to projects like The Only Way is Up, which we featured back in 2014.

Much of the Los Angeles-based artist's earlier works placed Black subjects at the center of well-known Renaissance paintings.

Erizku took a similar direction with Beyoncé's shoot. The photos envision the singer as a Black (and beautiful) version of the Roman goddess Venus.

For his latest collection, I Was Going to Call It Your Name But You Didn’t Let Me, Erizku paired his paintings with curated mixes of the songs that inspired them. It showcased last year at Art Basel.

This isn't the first time that Beyoncé has looked to African artists for inspiration. The works of African creatives have been unmistakably present in many of her recent projects. On last year's Lemonade, she spotlighted Laolu Senbanjo's Sacred Art of the Ori and commissioned the writings of British-Somali poet Warsan Shire—who also wrote the Yoruba-inspired poem "I Have Three Hearts" that Beyoncé shared on her website to accompany the maternity photos.

Beyoncé's affinity for African creatives is no secret, and with the wealth of innovation and talent coming from this group of artists, it's not really a surprise either.

Check out more of Awol Erizku's work below.