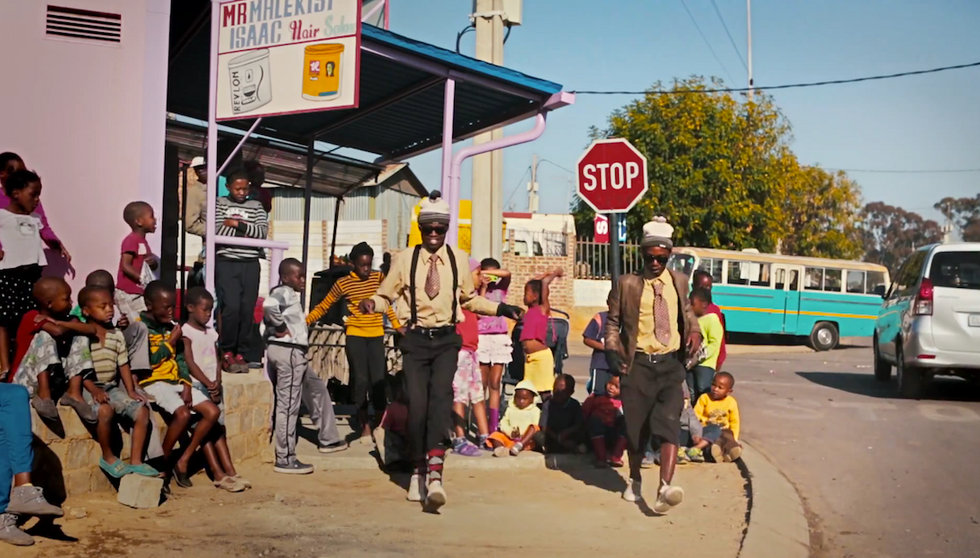 Pantsula dance featured in Basement Jaxx video for 'What a Difference Your Love Makes,' filmed in Joburg's Alexandra township.

We recently deemed Cody Chesnutt's "I've Been Life" video the early winner of diaspora anthem of the year. It's still only August, but we're pretty sure our favorite dance tribute of the year has hit the web. Shot on location in Joburg's Alexandra township, the latest visuals from British electronic duo Basement Jaxx are a feel-good showcasing of South Africa's pantsula dance. We've laid out of five reasons "What A Difference Your Love Makes" is more than just a flashy dance vid.

1. The Evolution of House

We've previously discussed the role of house music in a newly democratic SA.

"House music in South Africa did not start with the hyper-talented and contemporary Black Coffee (above), Culoe de Song and Soulistic crew; in fact, house in South Africa has roots almost as long as hip-hop’s golden era in the Boogie Down Bronx."

Though the house influence on the track is up for debate, Basement Jaxx represent the evolution of a genre that spread from abroad and would ultimately hold very direct implications on South Africa's musical history.

Was director Damian Weilers speaking to house music's bigger picture role in post-apartheid township life? In the video, music revives one-half of our new favorite dance duo. Perhaps this is Weilers' literal representation of the role of house music amongst Alexandra as a community?

"South Africa’s history speaks to a larger point; deep house is healing. It makes sense that a place still haunted by the ghosts of apartheid would make house music the sound of daily living. House music is played everywhere in South Africa; in the clubs, in the taxis, in the elevators, at the airport and in the stores. There is even a religious segment of house heads that play house for Christ."

While certainly the story of two young boys, the video tells a larger tale of the history of dance in South Africa's townships, specifically in Alexandra where pantsula is said to have originated. Like hip-hop in the 80s and early 90s, pantsula is specially significant for its role as a means of expression for young people. Though pantsula dates back as early as the 1950s, in the 80s the dance evolved into a grass roots means of resistance against the apartheid regime. In the case of the video's brothers, pantsula has also served as a key outlet for many young South Africans in townships, an alternative to crime in light of limited opportunities. The Orange Farm-based dance crew Real Action is a more well known instance of pantsula channeling the creative energies of Joburg youth through dance. For more on pantsula check out Pantsula Dance: Case Studies on the Origin and Makings of a Township Art Form (Collin Vincent Myburgh).

4. A Thank You Letter

Basement Jaxx may not have had pantsula in mind when penning the lyrics to their latest track, yet the video runs like the protagonists' love letter to the dance they were raised on.

"You woke me up from this sorrow place

You switch me off

You rescued me when you came along"