120 Years After The Battle Of Adwa, A Documentary Remembers The History Of Italy In Ethiopia 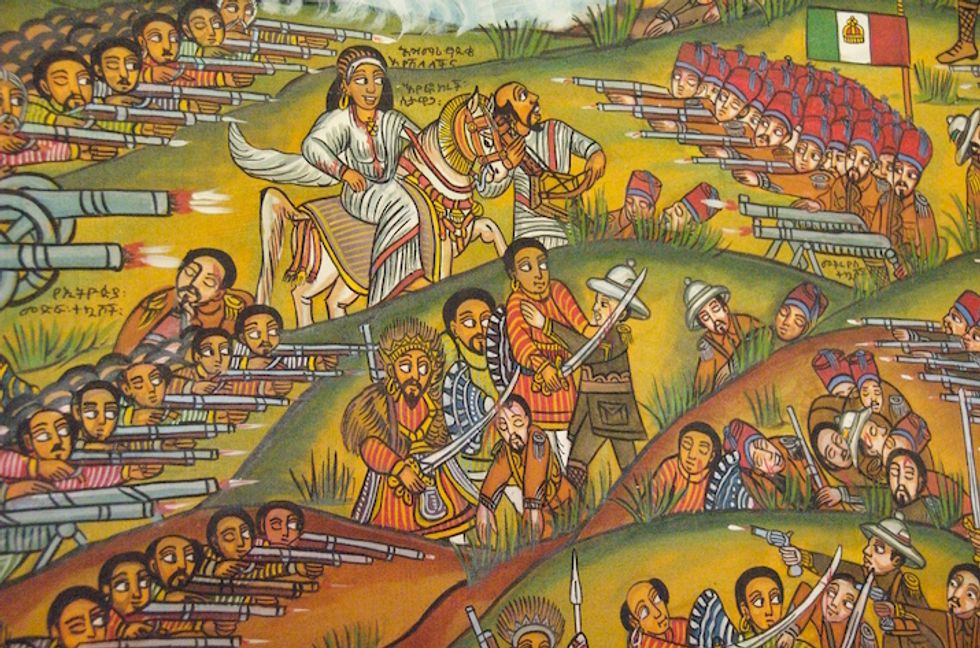 A fascinating new documentary explores the Italian occupation of Ethiopia from 1935-1941.

This month will mark the 120th anniversary of The Battle of Adwa.

Ethiopia is widely known as the only country in Africa, besides maybe Liberia, not to be colonized by a European power. During the twentieth century, many African nations adopted Ethiopia’s flag colors of green, yellow, and red to proclaim to the world, we too are free as our Ethiopian brethren.

Ethiopia did not escape European colonization for a lack of attempts. To the contrary, Italy attempted an invasion twice. The Italians brought with them mustard gas, roads, guns, infrastructure, and atrocities. Under the leadership of Pope Pius XI, Vatican officials and clergy blessed the bombs that massacred scores of Ethiopian civilians. Here’s a clip of a priest doing just that. "Sanctus Sanctus Sanctus" (holy, holy, holy) he says as he holds the bomb.

The first Italo-Ethiopian War began during the Scramble for Africa with Italian forces encroaching into sovereign Ethiopian territory leading to skirmishes and battles that culminated in late February 1896 at The Battle of Adwa. The poorly equipped Ethiopians, led by Emperor Menelik II, decisively beat back the military might of Italy.

This legacy of defeat haunted Italy’s fascist leader Benito Mussolini’s sense of nationalistic jingoism and in 1935 he began an offensive to seize Italy’s “rightful place under the sun.” What he didn’t consider was Ethiopia’s long rainy season.

What is not widely known is the history of struggle that engulfed Ethiopia, the short but lasting impact of the Italian occupation from 1935-1941 and Ethiopia’s triumphant return to independence.

If Only I Were That Warrior, winner of the Premio ‘Imperdibili’ at the 2015 Festival dei Popoli, is a thoughtful documentary that grapples with these highly contested subjects, including Rodolfo Graziani, the fascist Italian general behind the death of tens of thousands of Ethiopians in the 1930s.

Known as “The Butcher” for his sustained brutality, Graziani famously spoke the words, “The Duce (Mussolini) will have Ethiopia, with or without the Ethiopians." And he delivered on that proclamation by indiscriminately killing civilians, deploying chemical agents and leading a campaign of mass death in Ethiopia. Graziani never faced international law tribunals for his role in the occupation.

In 2012, the small conservative town of Affile, Italy, where Graziani was from, erected a monument to the fascist war criminal, sparking international protests. The documentary follows this long and complicated history, detailing the protests around the monument with interviews with Ethiopians and Italians in their home countries and in the diaspora. With rare archival footage from the Graziani Archive, the documentary offers a fascinating glimpse into the conflict.

If Only I Were That Warrior marks the feature-length documentary debut of Brooklyn-based filmmaker Valerio Ciriaci. Filmed in Ethiopia, Italy, and the United States, the project follows the stories of three people as they discuss the vestiges of the Italian occupation, a story that traverses generations and cultures.

Check out the trailer below and catch the documentary screening this month in the following locations across the U.S. and Italy.

If Only I Were That Warrior February 2016 Screenings

Sponsored by The Italian Cultural Center of Minneapolis and St. Paul

Sponsored by The Global Alliance for Justice – The Ethiopian Cause. Q+A with director Valerio Ciriaci and producer Isaak Liptzin.