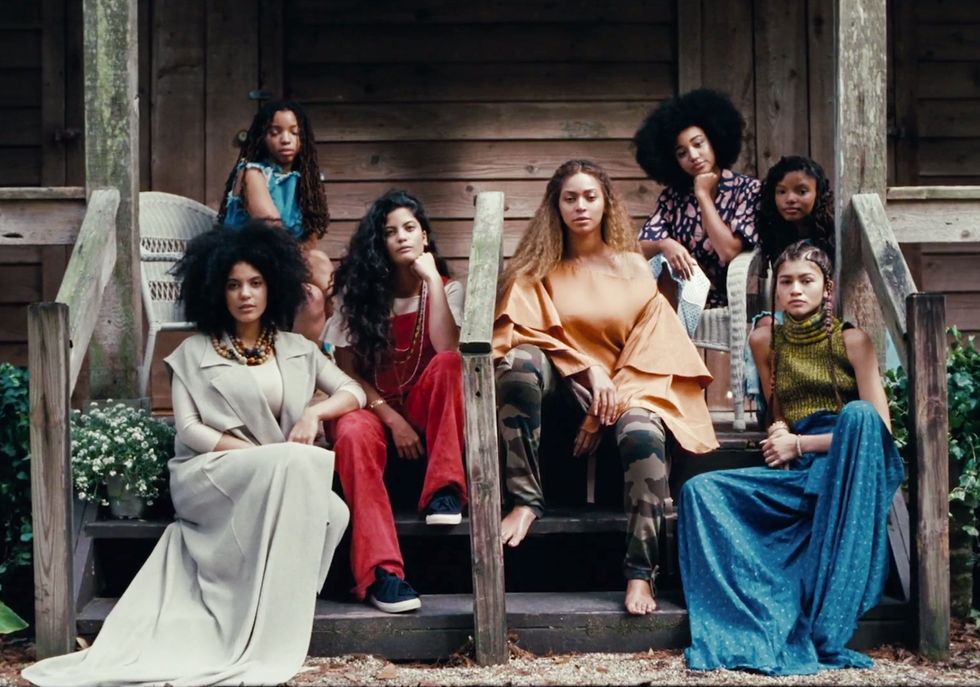 Okayafrica favorite, the Nigerian visual artist Laolu Senbanjo’s work plays a major role in Lemonade—the extended video from Beyoncé that premiered tonight on HBO—with body-painted dancers in his signature afromysterics style taking up a portion of the hourlong event. His Yoruba-influenced markings even adorns Beyoncé at one point.

The Laolu Senbanjo adorned dancers in Apathy. Screengrab from Lemonade

We were expecting that. What we didn’t expect was another member of the Okayafrica family, Lisa-Kaindé of Ibeyi, looking stark in black and white, two minutes in. Lisa-Kaindé and her sister Naomi made a few more cameos throughout the night—sitting in a tree and on steps alongside Chloe x Halle, Amandla Stenberg, Zendaya and Queen B herself.

Overall, Lemonade is packed with references to afro-diasporic religion, afrofuturism and southern gothic tropes. Some of the scratchy voiceover and long shots of Yoncé walking among the ruins of Fort Macombe, Louisiana give it a True Detective Season 1 feel. Not the first time the Beyonce/Jay-Z/True Detective link has been made. In Lemonade, however, it's more like True Detective meets Toni Morrison’s Beloved.

Other parts feel like brooding indie films meets Knowles-family home movies. Still others are more like conventional R&B videos set on a city street where our hero smashes car windshields to what sounds like a reggae cover of the Yeah Yeah Yeah’s “Maps” before driving over everything in a monster truck.

The rest of Lemonade is a montage of Mardi Gras Indians, bayou lounging, candomblé and blues guitar. The music has more roots and gospel feel than what we’ve been given lately. It’s fitting.

Beyoncé and Serena have an incendiary chemistry. Screengrab from Lemonade.

There is also a cameo from the unmistakeable Serena Williams who will give you goosebumps when you see her and Beyoncé dancing in the same frame.

Also spotted are the model Chantelle Brown-Young and the star of Beasts of the Southern WildQuvenzhané Wallis.

A full twelve-track Lemonade album was released at the end of the HBO special, featuring full versions of a number of the songs featured in the video and appearances by Jack White, The Weeknd, James Blake and Kendrick Lamar. You can listen to the album via Tidal here. Check out the tracklist below.

1. Pray You Catch Me