Laolu Senbanjo Takes Us Inside The Spiritual World Of Afromysterics 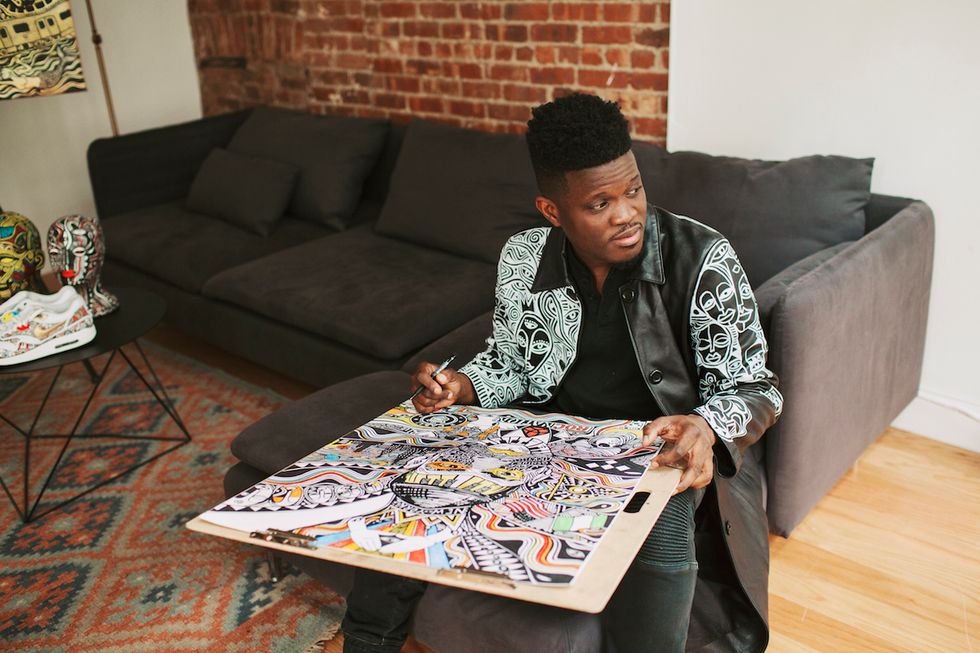 I first met Laolu Senbanjo almost a year ago to this day in Austin, Texas. He was about to hit the stage at SXSW 2015 as an unknown known in a showcase that also included Gyptian and Charles Hamilton. Back then, Laolu was a struggling Brooklyn-based afro pop musician who mentioned he also does art. Now he’s a world class painter. Sure, his music’s struggled. But that’s just one drawback of becoming a favorite artist to the stars–Black Coffee included–and the new face of Equinox gyms.

Most recently, Laolu, now 34, was handpicked by Nike as one of their Masters of Air. His work will find its biggest platform thus far tomorrow at Air Max Con NYC.

When we sat down together last Sunday at Okayafrica’s office in Brooklyn, Laolu tells me he’s been getting calls nonstop from folks back home in Nigeria ever since the Nike announcement.

Of course, it wasn’t always that way. When Laolu was a full-time human rights lawyer and a struggling visual creative in Nigeria, his countrymen couldn’t care less about his art. His own family saw his art as just a passing phase on the path to money, success and normalcy and his interest in Yoruba traditions as disrespectful to his Christian upbringing.

As a young man growing up in Ilorin, he was most interested in art and spirituality. In 2007 Laolu began calling his style Afromysterics––a term he uses to refer to the “mystery of African pattern.”

After working for the National Human Rights Commission for a few years, Laolu decided to leave his job and become a full-time artist. In 2013 he moved to New York City, where he joined forces with a group of fellow musicians in Brooklyn to form Laolu Senbanjo & the Afromysterics.

He also began taking his Yoruba-influenced art from the canvas to virtually everywhere: most notably, the human body. The body painting began when he spotted a photo of New York-based jewelry designer and model Reign Apiim posing in front of his art. “I could see an extension of her. It was like everything just came together in that work,” he says. Laolo sent Reign a message suggesting they collaborate. She said yes, and the rest is history.

Body painting is an intimate experience that sees Laolu spending up to seven hours with a relative stranger. A nude stranger.

We had the following conversation with Laolu ahead of his appearance at Nike Air Max Con NYC.

How has your art evolved since you first coined Afromysterics in 2007?

Everything is my canvas now: human bodies, clothing, shoes, murals, chairs, tables—everything. Art shouldn’t be limited to the wall or the museum. Everything should be art.

What are you looking for in a body painting model?

You have to be on the same page. You have to know why you're doing it and the reason you’re doing it. I don't want to do something with people who just want to do it for the fun of it. I call it the Sacred Art of the Ori because it's the essence of humanity itself. I try to paint on you what I see as ancestral skin. It's like I'm giving you new skin. I look at you, and your body tells me what to do. So I feed off your energy, and that has to be right. I feel very connected with that person, and they take a part of me with them.

How was your body painting received back home?

In Nigeria, Christianity has totally overrun everything. People don't practice their traditional practice or religion anymore because it seems to be dark. That's a big problem that we're having. That also erases art. It takes away the culture. It takes away a lot of things from people. Basically they are walking zombies because they don't even know who they are. They can't even connect with their own heart.

It took a while for my own parents to understand my art. When I would show my mom when I was a teenager, she'd be like, "Oh, what is this? Why are you drawing things like you're a traditionalist? We’re a Christian household, so you can't do that. Why don't you draw landscapes and Jesus?" But it wasn't coming to me, because that wasn’t who I was. It took me a while to even accept who I was because part of me wasn't accepted. To even see I was an artist. Then what kind of artist? I'm very, very ritualistic, traditional. My art is very symbolic.

We first met a year ago at SXSW. What's changed for you since then?

I’ve been torn between my love for my music and my love for art. Bridging the two has been a battle. Right now I'm focusing on art. My music has suffered a lot. I'm still learning and finding ways to merge the two together. A lot of my art that you see is actually translated from a lot of music I make and vice versa. If anything has changed it's that I've focused a lot on my art in the past year. I had to make some sacrifices. I had a huge band, I just dismantled everything. It's crazy, broke my heart, but hey.

Do you feel like anything’s changed in society in terms of how people are seeing your art and how it's being received?

We're at a point in the world right now where everybody is looking towards Africa. Perceptions are changing. I don't want to say “African art,” because art is art. Africans are telling their own stories, and making art for the world. You no longer just buy art at a Harlem market and don't even know who the artist is.

There are only a few really well-known African artists. Kehinde Wiley, and who else? Africa is huge. In Nigeria we have almost 350 languages. All these people have particular stories. Chimamanda Ngozi Adichie’s warns about the dangers of the one-sided story. You need to understand the fact that there is a lot coming out from Africa. Never dismiss anybody, because everybody's story is valid. They see life from their own perspective and their own background.

It's not where I want it to be, but it's on the rise. I’ve met people who have never been to Africa who were born here to African parents. They speak Yoruba or they speak Igbo. That is impressive. A lot of people lose that. Language is one of the first things you lose.

There were points in time when to be African in this country was not cool. You got made fun of in school for your accent. You said your name and people laughed. But now people think the names are cool because all of a sudden it's cool to have that African-ness. I want people to go beyond being cool and reach out. Go to Africa if you have the chance. Go to these places. Understand what is behind these cultures. Try to speak the language. Eat the food. Get to know the people. When you get to know the people, you understand their values, the essence of their art and culture more. We shouldn't just speak and choose what we want.

How did you first get started with painting on sneakers?

I've always wanted my work to move from just art to fashion. But I never had the resources to be able to actualize it. That's one of the things moving to New York helped me out with. When I go in an art store, I'm like a kid in the candy store. I buy leather pants. I buy paint for shoes, and I try it out. Just try to bring my ideas that I put on canvas, and put it on shoes. The minute I started doing it, everybody just went crazy.

Tell us about your new project with Nike Air Max...

At first [when I was selected as one of the artists for Masters of Air] I was like, "Masters of Air? Artists? You guys are selecting me as your... wow." Right now the news is on their website. My brother saw it. He called me and was like, "Man, this is crazy. To be honest with you, I never gave you a chance." That's my own blood brother. He made me want to cry. He always thought that this was just a joke. My whole art career was a joke to a lot of them. Right now it's not. And I'm happy. That’s evidence for some people who don't believe in what you do. A well known sports brand says, "Oh, you're cool.” Then automatically everybody thinks, "Oh man, you're the shit." But you've always been what you are. Somebody just saw you, like, "Ah, let's give this guy a spot because he deserves it." I'm happy. I'm honored. I'm excited to be a part of their team. For me I just think this is the beginning, and I hope to do more. This is exciting. I'm just happy to be here. I'm excited to be part of it.

What does your family think of your transition from lawyer to full-time artist?

It was a battle growing up for me because I always wanted to do art. My brother is an engineer. My older brother is a lawyer. My dad is a lawyer. My uncle is a medical doctor. It was almost impractical. It was more like I wasn't serious. That's how I was termed. When I told everybody what I want to do, they all said, "Oh, he's going to come around. He just has a brain wave. It happens to all of us when we don't know what we want." I was just like, "Man, I'm not coming back." I just knew I had so much to offer.