I Have a Problem With Big Narstie's Big Black Clown Routine 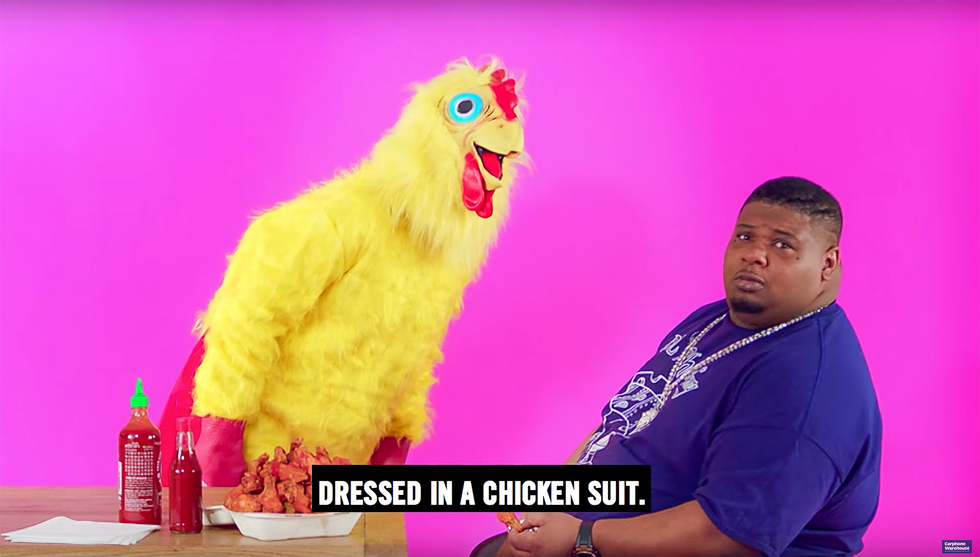 Unpacking stereotypes with the most embarrassing man in Grime

Samsung's advert for its latest product, the "S9," is an uneasy mix of clever and daft. In it, the grime rapper "Big Narstie" is asked to eat a bowl of hot chicken wings for an advert within the advert. The ad within the ad is simple: "we had an idea, of having you with the hottest phone eating the hottest chicken wings." The speaker is a young white man and sat next to him is a young black woman who joins in the attempt to persuade Big Narstie that the surest way to guarantee massive sales of the S9 is if he's seen simultaneously eating a bowlful of chicken wings.

Big Narstie, has transcended his role as a rapper of late, cultivating the public persona of a joker—and occasionally, a buffoon. Chicken, a cheap source of protein, is freighted with unappealing racial baggage. These two elements combined make the advert very uncomfortable viewing.

Is the core idea of the Samsung ad that potential buyers of S9 will covet the phone as much "Big Narstie" loves hot chicken wings?

What may surprise some is that as a rapper, Big Narstie is gifted and serious with an enviable ability to mine his personal life for emotional dense lyrics, as evident on this set for BBC 1xtra's "Fire In The Booth." The rapper's output includes two EPs and 7 mixtapes, the last of which "Base Society" was released in 2016. In 2014, he received a MOBO nomination for "Best Grime Act".

Is the core idea of the Samsung ad that potential buyers of S9 will covet the phone as much "Big Narstie" loves hot chicken wings? Exactly which part of Big Narstie is inviting the comparison? His obesity? The big, fat food lover and all its associations with poor diets and gluttony? Or is the hot chicken wing lover "Big Narstie," like other black people, supposed to be a notorious lover of chicken?

This is not explained in the 67 second ad spot. It is the set of the ideas put forward that are troubling—first, for the obvious racist stigma heaped on Big Narstie. Secondly, for the attempt at balance by having a black woman as co-conspirator in the stigmatising of the black man. Thirdly, and baffling rather than troubling, is the still persistent stigma itself despite being a fallacy (all races eat chicken), and a boring one by now (all races have eaten chicken for ages).

Big Narstie does not have a public reputation specific to a love for hot chicken wings. His persona as lovable buffoon in the British media rarely has to do with food at all, and more to do with his "roadman" take on British politics, weather forecasts and parody of "Game of Thrones." But there is also his pitiable participation in a debate at the Oxford Union on "Kanye West Is More Relevant Than Shakespeare", where the obese black man in oversized baggy jeans, t-shirt and gold jewelry debates humorously and not too intelligibly surrounded by a largely white student audience in suits.

Narstie could make himself the butt of as many jokes as he chooses, but the part of his person being used to sell the S9 is the one with the racial stigma attached to it. Are conversations around the burden of representation complex enough to lampoon an overweight black man with a love for hot chicken wings without any offense given? Even today you will find in restaurants, people who comment or stare, at a black person eating chicken. In fact, some black people will choose not to order chicken within earshot of co-diners for the simple fear of unwanted attention.

Just last week, in a lunch time crowd at a KFC branch in London, a black man asked if he could share my table. Once sat, he joked, pointing at my plate of chicken bones that I had neglected to chew the bones. My advice in return was that I only nibble the meat in public and chew the bone in private to maintain social dignity. I was only half joking. This happened at the same branch, outside of which, I once saw three teenagers carrying out an amature video shoot while a busy lunch crowd walked in and out of the shot. Dramatised loudly, the scene was of an argument between a young black boy and girl over chicken. Their friend behind the camera was a white kid.

To some passersby, they're just kids having fun and experimenting. And that might just be all there is to it. But they were also trading stigma for laughs, a school project perhaps. The discomfort in witnessing such a scene is the same feeling induced when watching Big Narstie in the Samsung advert, and perhaps in every time a black person is caricatured.

The hot-chicken-wings-loving part of him being used to sell Samsung phones does not exists in the public sphere and so could not be available for mockery and marketing gimmick. The stigma has been heaped on him, with his full complicity of course, and then projected onto viewers as a patent of trust to mean "you will love this phone as much as black people love chicken wings"—and what's more, a black woman is in agreement.

However one chooses to triangulate the advert's proposition for the new S9, the loser of dignity is the black subject, and those who, this viewer included, find the portrayal insulting.

Related Articles Around the Web
Popular
Music
heat of the week