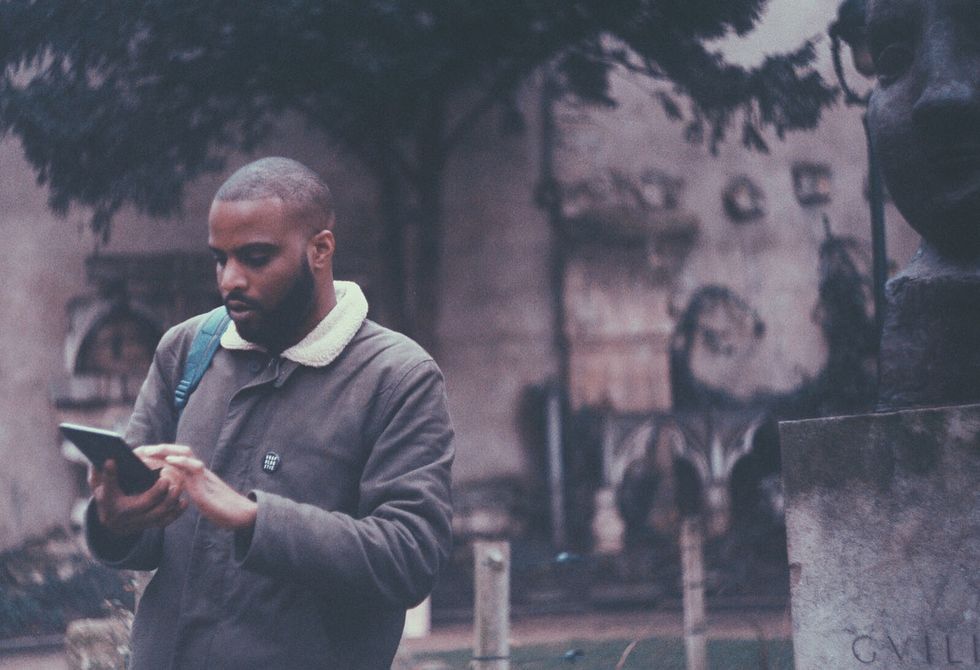 Meet the man who wants to make you discover Black Paris.

Paris, city of light, city of love, full of good looking and well-dressed people wearing berets and dripping in Chanel No. 5. Paris has managed to export a portrait full of positive clichés to the world with people of color largely omitted from this self-portrait. More often than not, tourists are surprised by the number of black faces they see when they visit Paris for the first time.

It's as if city promotional material purposely excludes people of color and their history. But one man has decided to change that: his name is Kévi Donat, and he is a 30-year-old tourist guide originally from Martinique, a French island in the Caribbean. Kévi has been offering 'black Paris walks' since 2013 to provide an alternative and more authentic vision of the city.

Maureen Douabou for OkayAfrica: What made you want to start the Black Paris walks?

Kévi Donat: I was already a guide, and I really liked my job but I wasn't satisfied with the representation of Paris that I was spreading. It was all really white and I felt that the part of the story that related to me wasn't being told. Plus, people had many questions about diversity in Paris, and they used to ask, "Why are there so many black people here?" a lot. I started doing the classic tours at the time when Aimé Césaire was being buried in the Pantheon (a monument which serves as a burial place for French heroic historical figures). I am from Martinique, just like Aimé Césaire, but I wasn't supposed to talk about him. The tours used to end in front of the Pantheon where there were two huge posters of him. Those visits were paid by tips, and my clients—often black Americans—used to ask me, "Who is that guy over there?", so I began to talk passionately about Césaire, and they liked it because they felt I had something different than the other guides. A few years later I decided to start telling the part of French history that is not told. I had decided to do it for a foreign audience, but it first started to become popular amongst local people; French people of any origin.

Apart from the Black Paris walks, you have a podcast and a show on a prominent French radio station, and you also appeared in the documentary Strolling by Cecile Emeke, talking about blackness in France. You are committed to tackling the lack of representation of French people of African descent. How do you find these opportunities? Do you create them or do they just come to you as a result of your project?

It's the result of a lot of coincidences, I studied political science, public health and sociology and I was supposed to be the manager of a retirement home, but I didn't want to do it, I was too young and I didn't want to work in public administration. That's when a friend offered me a tourist guide job and I really liked it. We were encouraged to speak about personal stuff to make the visits less monotonous. The fact that I am black, from a French colony, and that I learned French history from another angle, made my visits different. When I started the Black Paris walks in 2013, I got a lot of media attention even before I began to make money from it. They used to always ask me the same questions about "communitarianism," diversity, etc. So, I thought "If the media are so interested in this topic, why not make it a media project?" I didn't study journalism but with a couple of friends we started this podcast "le tchip" a year ago and it's going well. We wanted to talk about pop culture, without pretension but also without omitting issues of race and identity as is often the case in France. It's quite ridiculous to read articles about a movie like Get Out, which clearly addresses race issues, written by white cinema critics saying it's just a really good movie and pretending they didn't notice it was related to race. We wanted to do things differently.

What comments or reactions are the most frequent during your tours? From French people and also from foreigners?

Foreigners often ask simplistic questions such as, "Is France a racist country?" which is hard to answer because there is no place on this planet that is free of racism, every country has its prejudices. When I tell them that in France we probably have the most diverse population in Europe but we can't be sure because statistics on ethnicity are prohibited, they are really shocked and sometimes at the end of the visits they tell me, "It was a wonderful visit but tell your government to allow statistics on ethnicity."

From French people, I often get the question, "How come we were never told this story?" Also, some of them are really skeptical; they ask me, "How do you know that? Where did you find that information?," so I give them my sources. I am pretty confident about the legitimacy of my discourse because one third of my clients are scholars. I do a lot of visits with American university groups and the professors and the students always fact-check what I say and ask for references.

How has this project affected you on a personal level?

Thanks to this project I can now talk about racial issues in a very relaxed way with everyone. I don't take any question or remark personally. I talk about it with white people, black people, liberals, conservatives, French, Americans, young, old, etc. However, I adapt my discourse to the people, not according to their skin color but according to where they come from and what they're likely to already know or not. I can't do the same visits with university teachers and master's students in African studies as with an elderly white lady who is discovering the story of Black Paris for the first time.

Can you tell us an anecdote, something funny or interesting that has happened during one of your visits?

There is an old shop sign in the center of Paris with the words "Au nègre joyeux" (the happy nigger) written on it. A few months ago, I was supposed to meet a group that was late, so I decided to meet them where they were, at the Luxembourg garden, to show them a memorial to the abolition of slavery. I didn't know they were white because I hadn't seen them before. The issue of slavery is something that makes white people tense, especially Americans, so it wasn't the best introduction. It kind of fell flat. Instead of continuing with that topic, I took them to see this sign that is particularly interesting because the people living in this neighborhood refuse to admit that there is a problem with the sign. They find excuses like, "Considering how he's dressed, maybe he wasn't a slave" or "He's smiling on the sign so it's not negative," etc. When it comes to French colonial history, white people are still very fragile, tense and sensitive. There are other historical facts which are unquestionable in this country, but colonial history is still seen as something open to interpretation. I usually use this sign to talk about representation and overt signs of anti-blackness in the public space. The sign wasn't here that day, it had been taken away to be cleaned because it is often vandalized but I showed the group pictures I had taken and asked them "Do you think this could exist where you're from?" Some of them said yes, and others said no. It's always interesting for me to ask that question.

What is your favorite monument in Paris linked to black history?

The Pantheon. I always explain at the beginning of my tours that it's one of the only monuments in Paris that includes a bit of colonial history. It's beautiful, it's big, it's full of people with interesting stories, with diverse backgrounds and from diverse origins because the people who are buried there are chosen based on their own personal merit, although there is clearly a lack of women, especially women of color.