The Black Indie Artist You Need to Listen to This Month: BLXPLTN 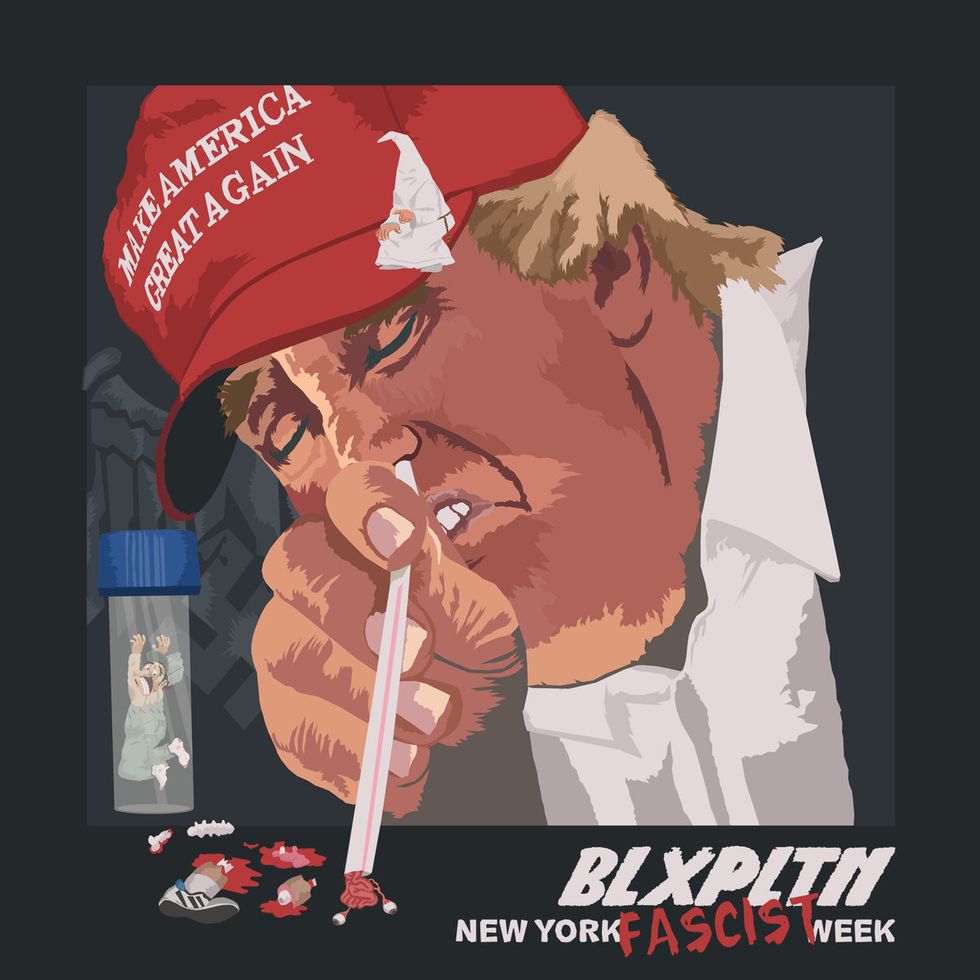 This new series will feature the most exciting independent and alternative artists from Africa and its diaspora. Black artists are complex and multidisciplinary. Twice a month, we'll introduce the hottest, boldest musicians out there that you need to listen to.BLXPLTN

Austin-based punk band BLXPLTN's latest album, New York Fascist Week, features a cover art of Donald Trump snorting the pain of others. Even by punk standards, it's difficult to be any more political than that.

And yet, a year on, the band's leader TaSzlin Muerte, aka TaSz, has become sick and tired of it, which is surprising considering the fact that the band has never shied away from tackling political issues in their songs.

The visuals from the album were inspired by the fact that, as TaSz recalls, during the 2016 US presidential campaign, it appeared Trump was addicted to the pain he inflicted on others. And he keeps on doing it. "Everyday is a blessing that half the world hasn't been blown up yet. But my focus is to try to educate people and build a community. 'Why focus on Donald Trump? He got enough attention.' To be fair, I feel some guilt about our album cover, the last album cover, because that's what brought him where he is: all the media attention.Things were bad before him and he is not the worst that could happen," TaSz explains.

New York Fascist Week started as an album idea TaSz had on a shelf, ended up being a melting pot of all the ideas he had. He brought them to producers and the album was conceived, albeit not smoothly, band member Katthie Q left during the process.

BLXPLTN was conceived four years ago by TaSz and his friends Katthie Q (former band member, since then replaced by Jeremy Kivett) and Jonathan Hortmann, who were punks in the Austin scene. They didn't feel included and decided to do their own version of punk music, one that came from black people.Their inspirations are pretty diverse: from Nine Inch Nails, Ministry, Downtown Boy, Ho99909, andThe Obgns, to Ice-T.

They take the hands-on approach of punk pretty literally as all of their albums and EPs have been released on their own label, giving them more power to remain independent and to keep their artistic integrity. "In this industry, you do all the work and they make loads of money. We were like why not having our own label, put your own music out there and pay ourselves?"

The band is heavily political, although they never meant to be. So often is that the case for black and brown people making art: no matter how we try to be human, our identities and lives are politicized before our own eyes and outside of our control. Adding to that lack of representation in the art and music industries means that people expect you to talk about specific issues all the time. "When we started, a lot of our songs were kind of stupid, and then Trayvon Martin was killed and we knew we had to say something. It's actually depressing and hard to talk about political stuff. I have children and I feel responsibility for them to stand up for something. One day, if they ask me what I was doing when these events were happening, I'll be able to tell them," TaSz explains.

But the band wasn't just inspired by current affairs and black tragedies they saw in the media, but by their own, complex experience with systemic oppressions, especially racism and homophobia.

TaSz is definitely not your ordinary I-pretend-I'm-punk-but-wear-$200-Doc-Martens-shoes leader. He started listening to punk in high school to impress a girlfriend. She made him a mixtapes with The Ramones and Orange 9mm and he listened to them to have something to talk to her about. Later on, he started to see bands like Bad Brains andPure Hell and felt the need to be included in this.

Then, as a teenager, TaSz had multiple run-ins with the police, went to jail and had two cousins killed by civilians. The tragedy inspired the song "How Many Shots" from New York Fascist Week.

When he was a teenager, he got convicted for a crime despite having no prior charges and was sent to prison for 6 months. Inside the prison system, he got a first hand account of how it's designed to keep black people down and take away any chances to build their own futures. "The judge had something against me. I was trying to go to college and do my music but he refused to let me do it when I was on probation. He specifically asked me: Did I order you to go to college? I saw some horrific things done to people."

It inspired the band's next single, called "English," about colonization and the impact and power the English language had on POCs, just like TaSz's experience with the judge screaming in English to assert his power. "As soon as someone invaded into a foreign country and asked the natives to speak English, that was the beginning of the end."

BLXPLTN is too black for the queer scene and too queer for the black scene—and they sing about this strange intersection. Former member Khattie Q was adamant that the band had to give people a much needed representation. "We all knew we were queer but she encouraged us to speak on this. The more I talked about it the more comfortable I got and helped me with my own sexuality. Growing up, thankfully I never felt like I had to choose." BLXPLTN being open about their sexuality had an impact of their black and queer audience members, many of them regularly thanking them for helping them, and putting their thoughts and feelings into songs. "In fact, they helped me!" TaSz reveals. Everyone needs to understand that queer people come in different shapes and forms, and to let queer people understand that they're not alone.

On their new album the band is currently working on, they're going to explore new topics such as illegal surveillance, internet war, colonisation, the shadow wars being waged in Africa now, the crashing of the alt right and beating up nazis. These couldn't be any more topical, as we now live in an era where beating up nazis is seen as an issue. "My granddad fought them during the war and they lost. And they will lose again and it's shitting on them. I don't even understand how you can buy a nazi flag nowadays. If I buy an ISIS flag, my door would be wide open, the police bursting in!" He laments.

BLXPLTN is the proof that punk is still one of the most daring, alternative genre for the politically minded. As for TaSz, he hopes the band will pave the way to make the punk scene more inclusive and mindful of queer people and people of color. Young people too, should be included more in the scene, he mentions, instead of old farts talking over and over again about how great punk was in the 70s. "I want black and brown kids to walk in the scene and feel like they belong," he concludes.