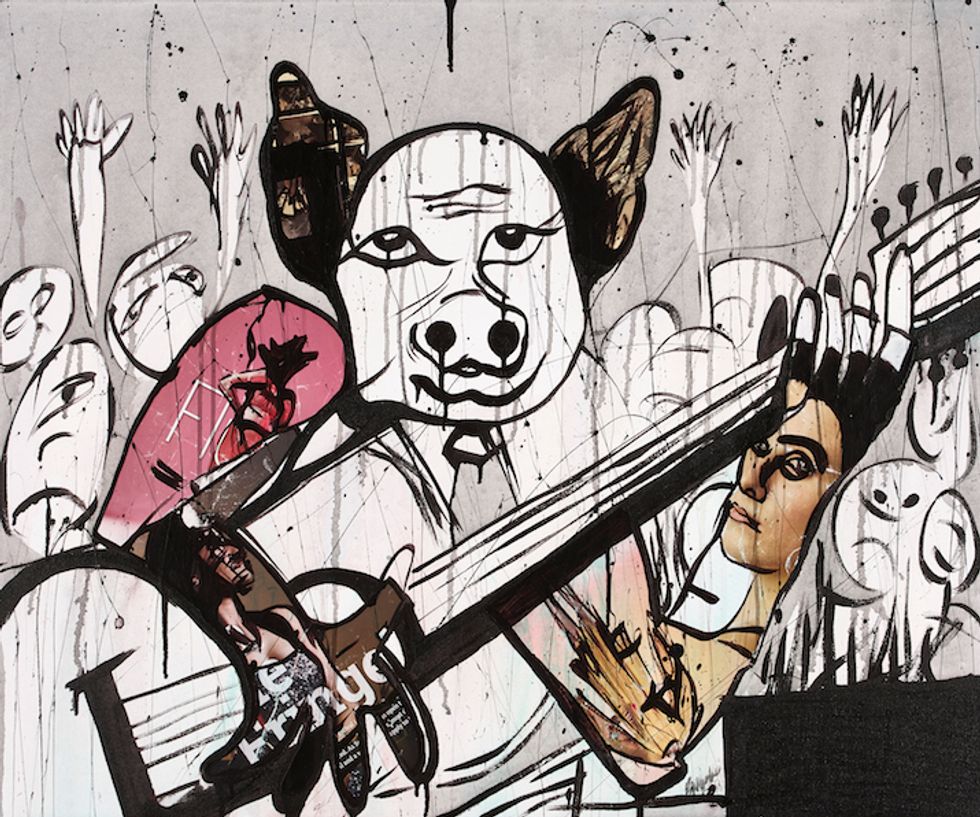 All images courtesy of Gallery MOMO

The cathartic power of the fine arts can never be underestimated; it forms a bridge between the wisdom of the artist's soul and the tangible world. It's a two-way bridge.

Blessing Ngobeni's As If You Care exhibition is, like the title, a cynical commentary on the apathy within the unpleasantness of living as “slaves of capitalism.” Currently showing at Cape Town's Gallery MOMO, this body of work represents Ngobeni's strong sentiments about what he believes to be the true motives of those who are elected to govern in South Africa. “I have found that most people act as if they care about the greater good, particularly those in power, but in reality they don’t," reads Ngobeni's artist statement. "They are pushing a personal agenda by manipulating the ideals of socialism in order to convince those who are desperate to support and celebrate them. The vulnerable have indirectly offered themselves as slaves of capitalism and as a result unwittingly continue to benefit the elite.”

Ngobeni's observations are sharpened by the points of view of his polarised life experience. Living as a street child under Johannesburg bridges, his spell behind bars for robbery showed him that life could be harsh and the political machine did not work for the benefit of all. In an email conversation, he explained to me that “Those in power are driven by greed and self-promotion and contribute little value, like our underperforming head of state, whilst the general publics are unable to better or enable themselves nor challenge the system. The masses have to take it upon themselves to abolish the existing, destructive system. There is a tension that exists between the current state of the nation and imminent, unavoidable disaster.”

It was during his time behind bars that he realised his life could take a completely different trajectory – if he wanted it to. So he enrolled for his high school certificate. He also came across the Tsoga (Wake Up) Arts Project, which helped him embark on the journey of uncovering his artistic talents.

Now he mingles with the elite of South Africa's art world with his own brand of clout. With a Reinhold Cassirer art award under his belt and being named as one of 200 Young South Africans to be on the lookout for by the Mail & Guardian, he has been somewhat ironically described as an 'Afro-Picasso' (Pablo Picasso's work was, for a time, heavily influenced by African sculptures and masks). In 2013 Samuel L. Jackson is reported to have walked into Ngobeni's studio and urged him to finish the piece he was busy with so that he could purchase it. But Ngobeni has seen the importance of maintaining his integrity in the midst of all the fuss about his work. “I am honoured to be recognised while I am still alive however it has not changed my nature as a person,” he says.

The current exhibition is a vivid specimen of what has come to be his signature 'graffiti-cross comic collage' medium. But even this came about as the product of some misfortune. “I used to do realism until an entire body of my work was stolen. I was fuming! I used that anger to explore other ways of expressing my art,” he says.

The fruit of his frustrations is his latest exhibition, which explores, while adhering to his usual themes, the interactions of city residents with their surroundings. This interaction is not particularly pleasant. “I am naturally reacting to the environment around me. It has never been my intention to comment on politics, that process just happens because I am realistic about my surrounding as much as the work has fantastic elements,” says Ngobeni. "The streaks in my work represent the ongoing crying of the marginalised."

Art is not only catharsis for Ngobeni but also redemption. “Nothing will stop you if you are driven. Art still gives you a chance," he says.

As If You Care is currently exhibiting at Gallery MOMO in Cape Town until August 15.

Olwethu is a writer/scholar/wannabe pugilist. He loves beer, film, literary fiction, Queen and art. He lives in Cape Town.