Botswana's Present-Day Brutality is Inherited From its Colonial Past 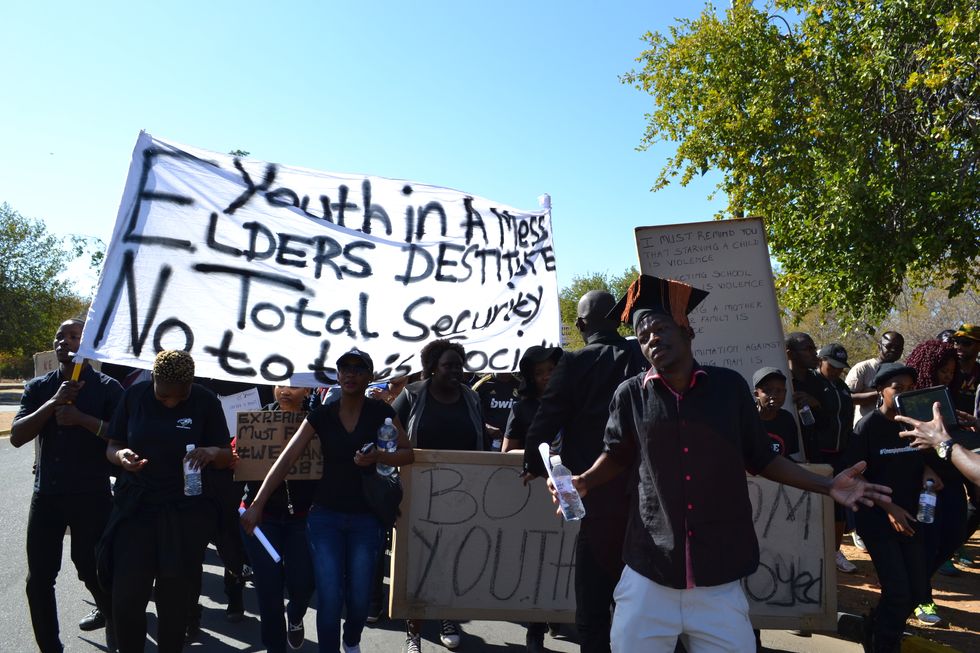 Last Monday, a group of peaceful students rallied in front of Botswana’s National Assembly. Their placards contained earnest pleas for jobs and the hashtag #unemploymentmovement meant to bring awareness to the state of economic paralysis many of the country’s graduates find themselves in. With national youth unemployment at 34.1 percent, their cries were far from unfounded.

After receiving orders to disperse, the police proceeded to beat the students in broad daylight, right under the facade of parliament. Several protesters were then detained and four photojournalists were arrested for refusing to delete footage of the incident.

This was just a glimpse at the underhanded brutality of the Ian Khama regime. This is the same president who chose to spend 60 percent of the national budget on defence, in a nation which has never independently been to war. His regime has militarized the police force. He’s imposed national curfews and surtaxes so high he might as well ban tobacco and alcohol products. He’s extended the arm of intelligence by forging the country’s first secret police service (the controversial DIS) deployed mostly to monitor his own people.

The independence of the press and the judiciary has never been under so much threat as it’s been during Khama’s tenure, with the state pulling funding out of publications which have been critical of the regime and judges being suspended for their politics at the snap of a finger.

But what’s most disturbing about Khama’s regime isn’t its surreptitious proximity to fascism, but rather the conspicuous absence of his critics, especially in the local media and academic landscapes. And this isn’t a generational loyalism like one might find in most African countries currently ruled by their liberation parties. No, this is a general consensus of denial spanning from the adolescent to the elderly. Everyone seems to thinks this is okay. To understand why, one has to understand the dichotomous psyche of Batswana people.

There are two kinds of Batswana. There’s the conformist Motswana: the devoted disciple of order and bureaucracy; the spineless, loyal servants of servitude, allergic to progress and scepticism. These kinds of Batswana tend to be the devout congregants of mediocrity and routine.

Then there’s the other kind of Motswana––the bully: the aggressive-all-the-time–for-no-reason, megalomaniac Motswana. This latter category of Batswana tend to manifest themselves in the forms of the notorious Gaborone West gangs robbing people of their belongings and what’s left of their dignity, the law enforcement officers with too much power and the pencil-pushing despots at government offices.

This social dynamic is ubiquitous in Tswana society. Put a handful of Tswana children in a room and watch them mitotically divide into these binary groups: the bully and the sheep. This dichotomy of the Batswana people is a sociological recipe for economic and political dystopia. A cocktail of the two most dangerous complementary categories of personality: those with a neurotic addiction to dominance and those with a neurotic addiction to submission. And the latter form the unfortunate majority.

This dynamic makes all the more sense once placed against the backdrop of the country’s historical politics. The nation’s first bullies were British missionaries, who, during the David Livingstone era in the 19th century, burned families alive for resisting baptism and/or refusing to denounce their pagan gods. Its next bully was Great Britain itself, and then South Africa. Its post-colonial bullies were the Oppenheimer and De Beers families, when the nation became a silenced spectator in its own diamond industry boom.

Like any long-term abuse victim the populace of this land has begun to confuse the abuse for love. It makes sense; no one has truly measured the cost of colonialism in Botswana. A nation impregnated with belief by rape, a rape of its land and resources, a rape of its very sense of agency. For so long, dissent got you killed as a Motswana. It therefore makes perfect sense that the majority of us would be terrified of it as a notion; and that only the cowards and the psychopaths survived and thrived through the gauntlet of our sordid history.

These phenomena have culminated in our collective duality as a people. We pathologically equate authority with abuse. So it logically follows that we’d not only condone but endorse the abuse we receive from the President. It’s the same abuse we received from our parents, teachers, law enforcement officers, employers and virtually all the authority figures in our lives. In a country that still has the death penalty; a country where teachers still beat students, border police abuse immigrants, nurses and doctors mistreat patients, Batswana oppress Basarwa (the indigenous Khoi tribes of the Kgalagadi), the cycle of abuse is bound to recur for ages to come and a leader in office who exemplifies that is not helping to end that cycle at all.

Now, more than ever, it’s clear that what Botswana needs is a nurturing, open-minded, inclusive and compassionate government. We need a maternal, and not paternal, brand of leadership. Most of all we need our leaders to lead with love instead of fear. We need to be able to criticize our government outside of our bedrooms without trepidation, because there is no such thing as progress without criticism.

Edward Kgosidintsi is an arts and culture writer based between Johannesburg and Gaborone. He also writes to provoke change and refract nuance to the African experience.