This Photo Story Walks Us Through Brazil's Beautiful Yemanjá Festival 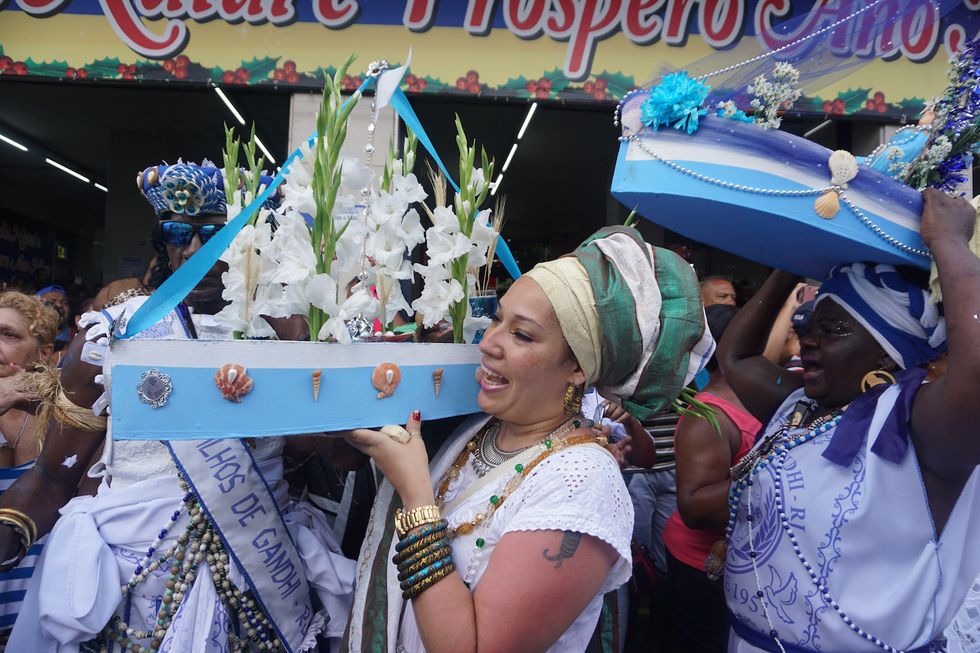 Millions of Brazilians and practitioners of Umbandá and Candomblé honor the Yoruba goddess of saltwater in the days before the new year in Rio.

In Brazil, the goddess of saltwater, Yemanjá, is always represented by a woman wrapped in blue, flowing robes and long hair. Millions of people celebrate Yemanjá on February 2, or the Catholic holiday of the Day of Our Lady of the Seafarers. But in Rio, the Yemanjá festival happens in the days before New Year's Day when practitioners of Umbandá and Candomblé honor this goddess.

Umbandá is a Brazilian religion that blends African traditions with Roman Catholicism, Spiritism, and Indigenous American beliefs. Candomblé is an Afro-Brazilian religion that has roots in the Yoruba, Fon and Bantu beliefs brought to Brazil by enslaved Africans. On December 29, Umbandá and Candomblé followers unite in a religious procession that starts in the Afro-Brazilian neighborhood of Madureira and proceeds to Copacabana beach where religious followers, dressed in white and blue, throw flowers into the ocean.

But Rio de Janeiro's city beaches weren't always a New Year's Eve draw for well-heeled locals and tourists. In the 70s, the well-to-do Cariocas in Rio de Janeiro's Zona Sul area fled the city during New Year's Eve. The beaches were left to Umbandá practitioners, who could peacefully do their religious rites and give their offerings of white flowers to Yemanjá right up until midnight. By the early 90s, that had changed. The city's leaders began to embrace New Year's Eve as a potential tourists attraction and Umbandá and Candomblé practitioners began coming to Copacabana beach a few days before the New Year's event to avoid the crowds.

The religious tradition became more organized in 2001 when the Mercadão do Madureira became an official sponsor of the religious procession. This market is located in Madureira, a poorer but more vibrant area of Rio de Janeiro that rarely attracts tourists. Few people know that the festival starts in Madureira's Mercadão, a local market that is considered to be the best place for Candomblistas and Umbandistas to buy special herbs, clothes, and figurines for their religious practice. In 2001, a fire destroyed this traditional market but it was rebuilt within a year. A local store owner decided to give thanks by creating an event in which a 2-meter replica of Yemanjá would be carried from Madureira to Copacabana beach. Today this festival attracts more than 10,000 people in Rio and its considered one of the most traditional ways to celebrate the New Year.

The shops in Mercadão Madureira sell religious materials to practice umbandá and candomblé.