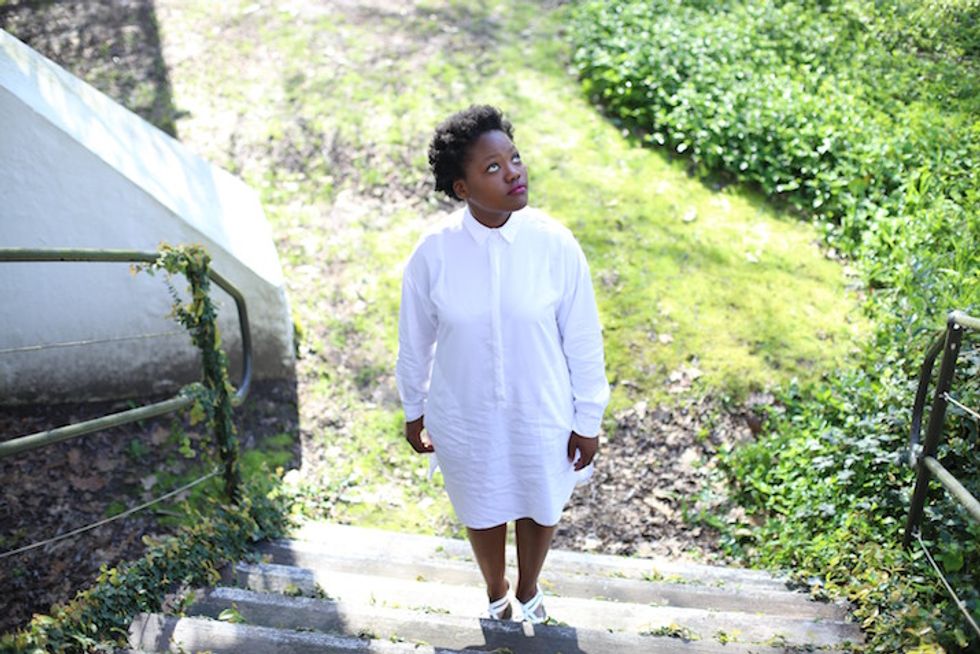 “I saw the best minds of my generation tearing pages out of Paradise Lost to wipe their asses when they ran out of kak papier. Sticky taping colonial statues with black bags,” recites Cape Town poet Koleka Putuma to a mostly white audience in Stellenbosch, Cape Town.

Putuma, clad in a short white dress with slits on either side, is the closing act for TedxStellenbosch. Her poem, Dear Allen, references the Rhodes Must Fall movement that fought to take down the Cecil Rhodes statue at the University of Cape Town.

There are a few soul claps from the audience, clicks encouraging her along as, syllable after syllable, she infects the whole room with awkwardness. The performance is met with empty applause—no cheers or laughter. That poem, she later tells me, she performed the day the Rhodes statue at UCT fell. “It’s a weird thing to get the applause when you get these stares that are not really sure where this is going,” she says to the crowd.

A few laughs crackle through the hall. “Relax, it’s gonna be okay,” she assures the audience. “Poems are a way of having a conversation with people. And I believe there are a lot of conversations that still need to be had. TRC [Truth and Reconciliation Commission] didn’t do it. They thought they did it but they didn’t.”

Koleka during rehearsals with Poet Roche Kester before the last run of their play, 'Man and Alchemy,' which Koleka directed at the Theatre Arts Admin Collective. (Photo: Andiswa Mkosi)

The poet, playwright and director has only been in the industry two years and she is already kicking major ass. Two months after graduating from the University of Cape Town with a BA in Theatre and Performance, Putuma was nominated as best young director at the Fleur Du Cap Theatre Awards. She was the champion at the first Slam For Your Life and UHM—an award-winning play she directed was picked up by the prestigious Artscape Theater Centre. She is currently in an 8-month residency at Cape Town’s Magnet theatre, where she directs productions for children.

“When all these things happen, I’m like, ‘Hey God, am I gonna die young?’,” jokes Putuma a few hours before her performance. We are sitting together in the foyer of the Spier conference center. The birdsong is audible above the hum of the river, just a few metres away from where we sit just like in the Swazi love stories I grew up to. My friend and photographer Andiswa Mkosi’s camera clicks and whirs.

Stellenbosch was mired in controversy after the release of the documentary Luister, shot by four UCT students documenting the perennial issue of racial segregation at Stellenbosch University. The institution teaches mostly in Afrikaans—a language often associated with apartheid. The university has long been known for systematically excluding black students who usually don’t speak Afrikaans.

The film documents the stories of black Stellenbosch students who have experienced racism in the university. Writer Panashe Chigumadzi of “Why I call myself a coconut to claim my place in post-apartheid South Africa” speech fame pulled out of TedxStellenbosch. She suggested that, in her place, members of the Open Stellenbosch movement–a student body aimed at transforming the institution—make a presentation on the issue highlighted by Luister.

Putuma also thought of pulling out of the talk. “I agree with Panashe’s sentiments,” she says. “If I could show you my whatsapp, guy; I consulted a lot of people on whether to pull out or not. And a lot of people were like, ‘What is your intention, what do you want, if you pull out why would you be pulling out?’ And then I ended up arriving at [the decision to use] the platform to say some shit.”

As she prepares for her performance, I ask her how she feels. “I’m nervous and I don’t care at the same time,” she says. “Half of the audience are going to feel like they are being attacked but I don’t give a shit.”

A lot of Putuma’s work touches on race. “Blackness—the lives of black people,” she says, “our thoughts and our feelings. How we navigate our lives in the midst of whiteness.” In “Water,” one of the three pieces she is performing at TEDxStellenbosch, she creates a dichotomy between black people and white people using each race’s relationship with the ocean.

Putuma is obsessed with the afterlife. “I have a huge obsession with death,” she admits. “If you’re raised Christian, you are raised to focus on living for the afterlife, not living for the earthly things. Even though my Christianity has been morphed into something else, that has kind of stuck with me.” She tells me about her new play, M’buzeni, that’s opening in March 2015 at Artscape. “It’s about four girl orphans who’re obsessed with playing burials at the graveyard,” she says. “It’s a funny dark piece that I couldn’t have done on my own.”

“As a young black theatre practitioner,” says Putuma, “I’m tired of, when I go to the theatre, seeing black female bodies on stage being beaten, being whipped, being dragged by the hair from one end of the floor to the other or in maids’ clothes scrubbing the floors.” She’s not dismissing the importance of such stories, she says. She believes there are more stories to be told about black people.

Before retreating behind a shrub to rehearse, Putuma shares with me how she became part of Lingua Franca—a spoken word movement from the Cape Town township of Delft. Lingua Franca consists of five band members and five poets. The poets write in Xhosa, Sotho and English. “It’s been running for three years and only starting to take off now,” she says. “We have a show running at Artscape that got picked up for the second time, it started running last year. So this is our second professional show.”

“So you’re gonna do a Ted Talk in the context where there’s something called Luister and you not gonna want to talk about it?” exclaims Putuma. She scoffs, “Were they also expecting Panashe to come here and sing ‘Kumbaya’?”

The following day, Putuma published a post on her blog about the response she got at the event. The post generated many comments about the uncomfortable issue of race in post-apartheid South Africa.

I ask Putuma a few weeks after the event if any of the complaints by the audience have been attended to, to which she responds: “None of the complaints were attended to according to my knowledge. The wrath that did follow however, was on my blog. I had posted a reflection on the event and attached my poem ‘Water’ at the end of it. That generated a lot of conversation and hate mail, both on the blog and in my personal mail spaces.” The videos for TedxStellenbosch still haven’t hit YouTube yet. “I have yet to find out if the video will be deemed legal or eligible to be released,” says Putuma. “Either way, my work or intention regarding the TEDxStellies platform was accomplished.”