Cape Town’s 'Spinach King' Started His Business With Only $3 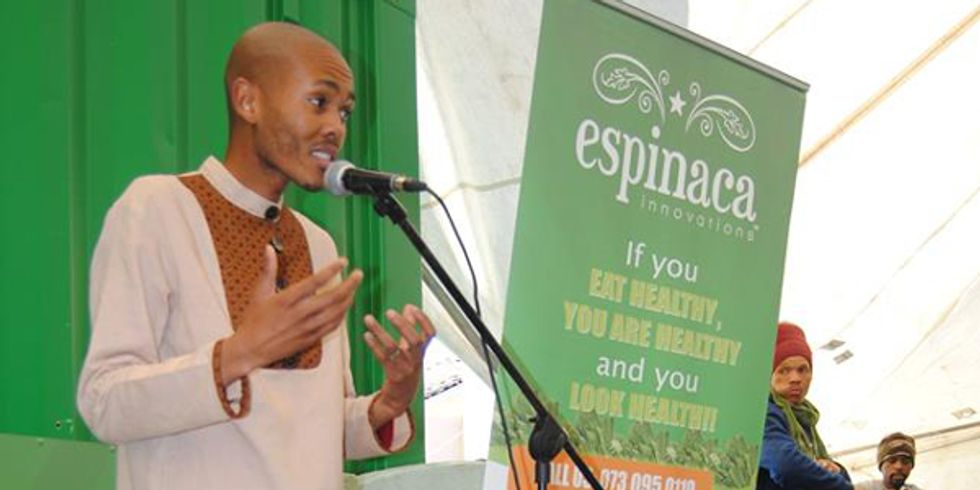 These days it seems $3 dollars can’t get you far, but maybe that’s because you’re not thinking outside the box like Cape Town entrepreneur Lufefe “Spinach King” Nomjana.

In 2012, Nomjana was volunteering at a community garden with a large quantity of spinach, and flat out broke with only R40 or $2.60 USD in his pocket, according to How We Made It In Africa.

But his ingenuity kicked in when he recognized an opportunity to make and sell spinach bread in his township of Khayelitsha. After doing research on recipes, which revealed spinach bread is nutritious and delicious, Nomjana cut a deal with his neighbor to allow him to use her oven to bake his first loaf.

With no luck pitching his idea to investors, Nomjana decided to start his bakery Espinaca Innovations, specializing in spinach-based baked goods, on his own.

“Back then it was not about profits. I was building the brand, and actually educating people about [healthy eating],” he tells How We Made It In Africa.

Since Nomjana began baking four loaves every night, Espinaca Innovations’ capacity has grown considerably. In 2014, the 28-year-old entrepreneur won a SAB Foundation's Social Innovation Award, which included a pay-out of R90,000 ($6,000 USD) that he combined with his savings to buy baking equipment and establish a storefront bakery, built out of a renovated shipping container.

Fast forward to today, Espinaca Innovations produces 500 loaves from spinach sourced from local farmers in addition to muffins and sandwiches. And it has a bike delivery service.

This month, the "Spinach King" has launched a second café and bakery in Khayelisha Mall, and is on-track to open a new factory in August with plans to expand into low-carb “banting bread,” a bread alternative popular in Cape Town.

Moral of the story: Believe in yourself because anything is possible, even with only $3 dollars in your pocket.

Read the full story here, or if video is more your speed, watch below.