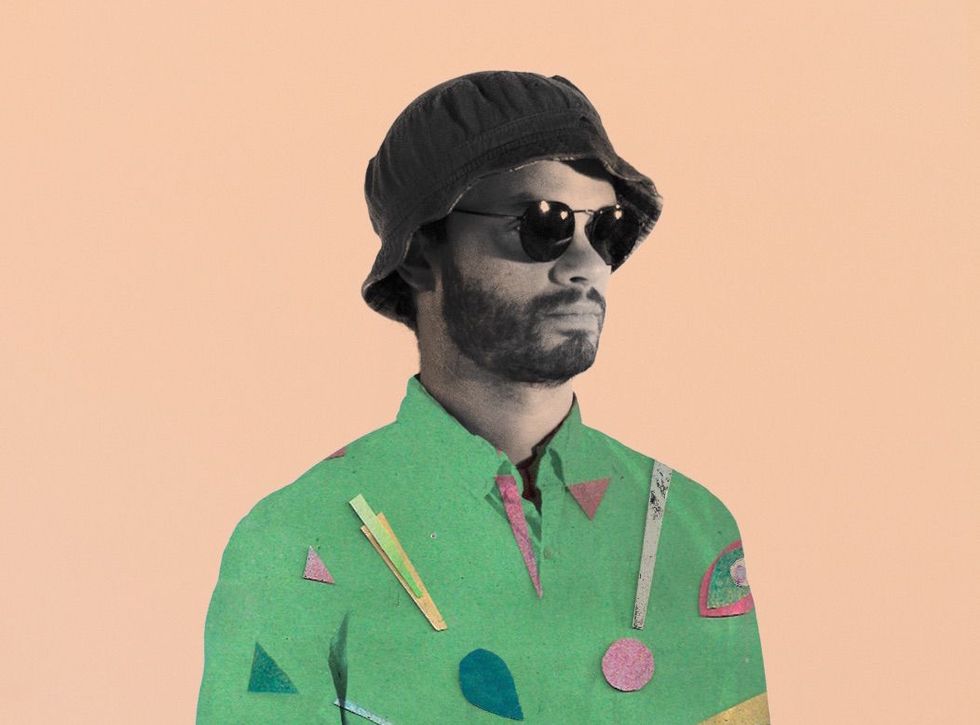 Cape Town-based producer Card On Spokes returns with a new EP, 'As We Surface,' featuring an ace team of his jazz world contemporaries.

A new generation of jazz is getting mad love from platforms that have historically shied away from the genre. Check Pitchfork’s homescreen today and there’s a good chance you’ll find Kamasi Washington and BadBadNotGood mentioned right alongside Grimes and Frank Ocean.

Cape Town-based musician Shane Cooper has a challenge for those same press outlets turning their eyes towards the jazz world: take a deeper, closer look at South Africa. If they do, he’s certain they’ll be blown away.

Bokani Dyer, Kyle Shepherd, Siya Makuzeni and Nduduzo Makhathini are a few of the names Cooper mentions in an email to me. “These artists are fucking incredible and go as deep as you can go. It bums me that press usually only listen up if there's an association with a celebrity.”

They should really be looking at Cooper too.

As Shane Cooper, he’s one of South Africa’s brightest talents in jazz, an award-winning bassist who in 2013 was named Standard Bank’s prestigious Young Artist of the Year for Jazz and won a South African Music Award (SAMA) the following year for Best Jazz Album.

As Card On Spokes, he’s one of the most innovative acts on South Africa’s underground electronic scene. The producer's 2015 Sunwalker EP featured some of the year’s sickest beats, and not to mention an absolute head-nodder in the Nonku Phiri and Okmalumkoolkat-featuring “On The Low.”

On his latest project as CoS, we begin to see the two halves of Shane Cooper merge. The six-track As We Surface EP is the producer’s most ambitious release yet. Swirling with multi-layered instrumentals, it’s an easy listen that’s also exceptionally complex.

“I like songs to grab you on a dancefloor, but also have details you can tune into on headphones,” Cooper says of his interest in multiple layers of percussion. “Like a picture of people in a room, I want you to be able to zoom in and read the title of the books on the shelves, and see the thread on the carpet, and notice the reflection on the window, or see the burnt out matches in the ashtray.”

In assembling As We Surface, he enlisted an ace team of his jazz world contemporaries, like UK phenom Shabaka Hutchings, 2015 Standard Bank Young Artist of the Year for Jazz Siya Makuzeni and trumpeter Marcus Wyatt. He also teamed up once again with Cape Town-based vocalist Bonj Mpanza and, rather masterfully, an entire children’s choir on “Stone Clouds,” which you can listen to in full here.

As We Surface is out now and available for purchase on iTunes as of Friday. It’s also streaming on Spotify. In the email conversation below, Cooper takes us further inside the making of his new EP and shares his take on the SA music landscape.

Can you shed some light on the making of As We Surface?

Each song is fairly unique stylistically, but is part of the same overall feeling I wanted to create. I think the first song I started writing was "Impala Parlour / Journey To Life" in May last year, and it grew from a bunch of recordings I made with some brilliant percussionists. The track is layered with talking drum, congas, various African shakers and more. Once I wrote the bass guitar chord sequence on top of that, the song started to flow.

The last track I wrote was “Faded Pictures,” which started right at the end of the EP process in fact. I was mixing down the other tracks in my studio, and got a little distracted with my bass standing next to me. I picked it up and killed some time with some chordal ideas. It led to me recording my brother’s tom drum with popcorn on it, and creating a layered percussion part that I recorded the bass chords on top off. I started to hear a trumpet melody in my head for it, and played around with some lyric ideas as well. A few days later I was in Joburg for another project and I called up Marcus Wyatt for the trumpet parts, and Siya Makuzeni whose voice was perfect for what I was hearing for the vocals. The timing just worked out, and I finished writing the last lyric “Pale chambers, unwoken” about 30 minutes before the taxi picked me up to drive to the studio to record.

Marcus played a stunning solo, and Siya's voice is so beautiful on there. It's my favourite track on the EP right now, and totally came out of a procrastination bass jam that lead to an important creative process for me.

The EP, you say, is inspired by states of transition. How has your sound transitioned?

I spent more time on these songs than I'd spent on any of my previous releases. I've become very interested in many layers of percussion, and have been recording all sorts of percussion and found-sound elements in my studio. I like songs to grab you on a dancefloor, but also have details you can tune into on headphones. Like a picture of people in a room. I want you to be able to zoom in and read the title of the books on the shelves, and see the thread on the carpet, and notice the reflection on the window, or see the burnt out matches in the ashtray.

I'm also incorporating a lot more live instruments and musicians from the jazz world now than before. The EP features Marcus Wyatt on trumpet and flugelhorn, Shabaka Hutchings on tenor sax, Jonno Sweetman on drums, Reza Khota on guitar, Siya Makuzeni on voice, Bonj Mpanza on voice, and a childrens choir as well. I have ideas to record much more of this for the next body of work, and want to start working with strings more as well.

Card On Spokes by Julia Ramsay.

How do you think the SA music industry has transitioned since you first started making music?

For starters there are way more artists making high quality music, taking risks, and putting in hard work than before, and we had a lot to begin with. Secondly, I think international press is starting to widen their scope on what's coming out of SA, and the variety of genres, but there's room for more of that.

It looks like the majority of unique creators in SA making strong, high quality music are independent, or part of more independent labels, agencies or collectives. It's an industry where the best work is made and curated by independent entrepreneurs who are hustling hard and putting in serious work, no bullshit.

There is a tough period that has begun in Cape Town where I am based, with a lot of venues shutting down. It's the natural life-cycle of venues, sort 5/6/7 years in SA. The bummer is that a bunch of great venues all closed within six months of each other, and I now hardly ever perform in Cape Town.

Where would you like to see it transition to next? What are some hopes you have for the SA music industry?

It would be great if there were more venues around SA for the kind of stuff I'm making, as there are many other artists working in similar fields, and there is an audience for it. The money guys who run the 'music industry' mostly play it so safe, and I think they are falling behind because of that. I'd like to see radio be braver, there is so much good stuff from SA artists they just don't touch because they are afraid to try. There are only a few radio DJs out there who I think are opening their eyes to what’s actually happening in SA beyond the commercial artists. I know it's often the stations who decide, more than the DJs themselves, so thanks are due to all the DJs putting time into listening to new local music and trying - they know what's up. I would also like to see more smaller scale festivals starting up. The big ones are great, but there's a gap for more small to medium size festivals. That's often where music really gets heard, the big ones are usually more about a larger experience from the whole weekend.

I'd like to see someone get a vinyl press going here, or more viable ways for artists to press vinyl. It's too expensive to ship them from abroad. I don't make physical copies of my CoS EPs, but I would if vinyl was a viable option. From that I'd like to see independent record labels selling their products at markets. People are willing to drop money on a craft beer at a Saturday market but won't pay for a digital album. Artists can't make money from streaming, so selling physical copies is the best way to actually sell records. Let's take it to the markets.

I'd also like to see the international press start looking even deeper into SA music. For example, Kamasi Washington got huge press last year on platforms that usually shy away from jazz. His association with Flying Lotus, and Kendrick Lamar helped, and the record is a great album. However, if that same press listened to albums by SA jazz artists like Bokani Dyer, Kyle Shepherd, Siya Makuzeni, Nduduzo Makhathini, and so on, they'd be just as blown away - these artists are fucking incredible and go as deep as you can go. It bums me that press usually only listen up if there's an association with a celebrity.

What are you most excited about in music right now?

Genre lines getting blurred. I hate musical purism, and I love that more people are getting weird. and bigger audiences are getting into that.

In no particular order:

Card On Spokes' As We Surface EP is up for purchase and streaming via iTunes, Spotify and Apple Music.