The CEO SleepOut is a Camping Trip for South Africa's Rich 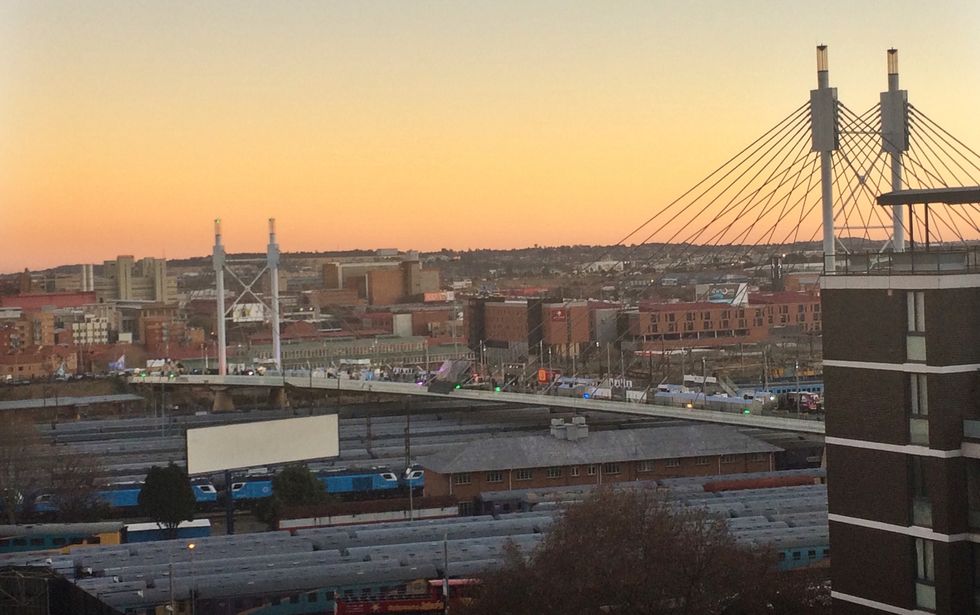 Last night valiant student protesters braved rubber bullets and tear gas to reach hundreds of CEOs "roughing it" on the Nelson Mandela Bridge. This is the same path that students defiantly marched over last October as they called for an end to rising university fees. South Africa’s manicured elite were surrounded by top-of-the-line security. Around them, the road was dressed with make-shift shacks, cardboard boxes used as chairs and fires to keep them warm. The bridge looked straight out of a movie set.

The Johannesburg edition of the Sun International CEO SleepOut reared its painfully disillusioned head for a second time last night. It has to be one of the most pathetic attempts of a bunch of privileged capitalists trying to raise money.

The CEO SleepOut is a fundraising project in which some of the top executives flex their philanthropy muscles and make a show of it by “playing homeless” for a night. In its inaugural year in South Africa (the sleepout initiative was initially founded in Australia in 2006), executives camped out in Sandton, aka the richest square mile in Africa, where people can spend over R80 000 for a dinner (USD $5800).

The SleepOut is more luxurious than an episode of Top Billing. The actual process of multi-millionaires spending a night on a well-guarded street consists of the following amenities:

Wifi and a communications hub

Soup and a bread roll

A piece of cardboard

Bottled water throughout the event

I'm not asking for the CEOs to stop giving money to the less fortunate. I'm just asking for them to do it in a less disingenuous way. According to Bill Gates, the former CEO of Microsoft and founder of the largest private foundation in the world, giving is about “human dignity and equality.” Nowhere does Gates mention wifi access to tweet your newly-found empathy.

The money it took to pull off the ridiculous task of closing off the Nelson Mandela Bridge, hiring security, bottled water and sleeping bags could’ve gone directly to the homeless. It could've benefited so many more people.

With just over an hour to go, the temperatures are still dropping, but empathy and funds are rising. pic.twitter.com/hrOYO5Us0R

Philanthropy is about giving those sleeping bags that you used for one night to someone who would sustain it for a lifetime. It’s not about spending large sums of money to feel what it’s like to have no money.

If I as an able-bodied individual spent a day in a wheelchair in the misguided hopes of gaining empathy for those who need wheelchairs, I would be dragged. So why is it okay for an executive to play poor for a night?

Last night, as hundreds of executives huddled around a fire, a group of Wits students showed up to protest against their current living conditions and exorbitant accommodation fees. They were met with rubber bullets and tear gas. The protesting EFF students aimed to reach the CEO of the residential company South Point and participating SleepOutter, Ndumiso Davidson. But the protest took an unfortunate turn and police fired bullets to disperse the crowd. One protester, it’s been reported, was shot in the eye. So much for closing the gap between classes.

This morning, as I went back to the scene of the crime, I noticed all that remained were the dishevelled shacks. At the end of the bridge were two homeless people, probably unaware that the night before, there was a glorified charity networking event on that very bridge.

Nadine Kutu is a South African filmmaker living in Johannesburg.