The Chibok Girls: Novelist Helon Habila's Tells The Story of Those Kidnapped by Boko Haram 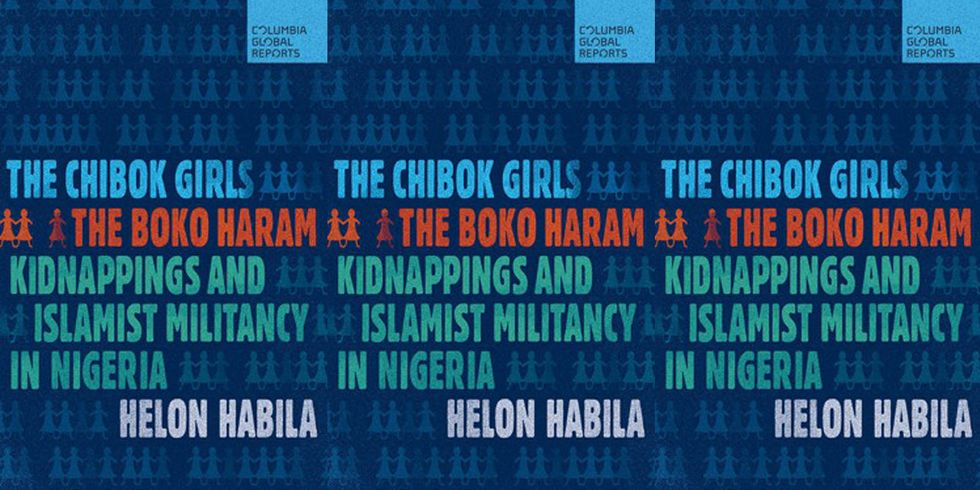 The Nigerian novelist on his new non-fiction book based on interviews with women and girls abducted by Boko Haram.

BRITAIN—“We keep calling them ‘Chibok Girls’ but they’re from different towns” says novelist and journalist, Helon Habila, of the 217 students who were abducted by Boko Haram in April 2014, an act that has become synonymous with the group’s campaign of terror in Chad, Cameroon, Niger and Nigeria.

Precise numbers of how many lives have been lost continues to vary, with estimates ranging from 12,000-15,000 people, with a further 3 million people displaced.

Habila is an Associate Professor of Creative Writing at George Mason University in the US, and the author of three novels—Waiting for an Angle, Measuring Time, and Oil for Water.

Habila was at work on his fourth book of fiction when he set it aside to travel to Nigeria and write about Boko Haram’s reign of terror.

The Chibok Girls combines the journalist’s search and reliance on facts with the novelist’s interest in the truths they tell.

We met the author at the UK launch of The Chibok Girls, part of the annual "Africa Writes" festival held at the British Library.

One of Habila’s decision to write about the abducted girls was to combat shallow analysis of the problems by media outlets, “because you get this one sided coverage on CNN painting this picture of horror of your country. And i knew this part of the world, that’s where i was born”.

Habila decided against writing a novel about the crisis because “they take too long to write, sometimes two three years to finish and I wanted something immediate”.

The fear with books about harrowing killings and humanitarian crisis they cause is that an insistence on statistics and dryness that is taken for objectivity makes for a turgid read.

Habila’s novelist’s sensibilities (‘story-ing’ as opposed to ‘story’) is the sweetness which masks the bitter active agents of harrowing human experiences and shameful failings of the state’s duty to its citizens.

A successful pitch to Columbia Global Reports, avowed publishers of long form journalism led to research trips to Chibok beginning in January 2016. “My aim was to meet some to the girls who escaped and also to meet their families. And also talk to journalists who have covered things about the insurgency”, says Habila.

“Travelling was still very hard in the local governments, towards southern Maiduguri, towards Sambisa Forest. We could go through Damboa, which is like one hour away from Chibok, but we had to go round to Yobe, to Gombe, to Yola. It’s about 500 miles. We spent the night on what would have taken an hour”.

Hard to imagine the psychological weight of wanting to assume one’s child is dead as a way of dealing with the real possibility of said child undergoing a gruesome ordeal. But Habila says “some parents carried out burial rites for their. Some asked the government to declare them dead so they could have a sense of closure. Some parents actually died from frustrations and heart diseases”.

One would expect the parents and families of the girls to be resentful towards their state and national governments for failing to safeguard its citizens, but more pointedly not doing enough to rescue their children.

I ask Habila if either the girl’s who have escaped or their parents hold the government or any persons responsible for the abduction to which he says, “there’s enough blame to go around but they also think it could have been worse. They [Boko Haram] could have killed them right there and then. The parents are not interested in apportioning blame, they’re just begging the government to do something about it”.

Habila believes the Nigerians, especially in affected states, are too powerless before their national and state governments to effect change and will accept any types of assistance however paltry.

It is this same powerlessness that has lead many young Nigerian men to join Boko Haram.

Before his death at the hands of Nigeria’s police, Yusuf Mohamed the first leader of Boko Haram gave sermons that raged against institutionalised corruption that has contributed to their poverty.

Yusuf Mohamed also had a welfare system that included micro-financing, loans, feeding and arranging marriages effectively running his own government. The man who feeds the minds and bellies of a people holds a great sway.

These hearts and minds, especially those of the young men, coalesced into a private army that were ready to do their leader and benefactor’s bidding.

This ready army were used as political thugs allegedly sought by Governor of Borno, Modu Sheriff, who was seeking a second term in office.

In return Governor Sheriff was to grant Yusuf Mohamed’s request of a stricter Sharia Law which enforced penalties like amputations.

Helon says the governor, upon winning, reneged on his promise and this betrayal made enemies of him and Yusuf Mohamed who then declared war on the government but also it’s citizens.

Early militarised actions against Boko Haram exacerbated the problems they posed. Yusuf’s followers who survived the army’s raids in an effort to suppress the group were energised into believing they were being persecuted.

The corrupt and directionless government their leader preached about were just as uncaring and antagonistic as he warned.

It’s public knowledge that victims of Boko Haram’s terror often times meet stiff opposition from their communities when they return home. Suffering at the hands of Boko Haram also means being tarnished by them. As a result their tragedy doubles, compounding their trauma.

“Reintegrating into the communities is not going to be easy” says Habila who blames the low levels of education and lack of therapy for direct victims, “we’ve heard about girls who were asked to go back to Boko Haram” because of the shame association with Boko Haram brings.

About 3 million people have so far been displaced from their homes and means of livelihood, half of whom are in Internally Displaced People (IDP) camps in Maiduguri alone, creating a huge refugee crisis which Habila calls “a problem for the future”.

In a Nigeria where differences are often sharply drawn along religious, regional and tribal differences, a writer from the North, as Habila is, criticizing a president from the South, as President Jonathan is, could easily be seen as having a second motive other than that which has is given.

Habila is unbothered, “my primary concern is to go after the truth and let the people speak to me. To give a historical context to events we see on a 24 hour news cycle”.