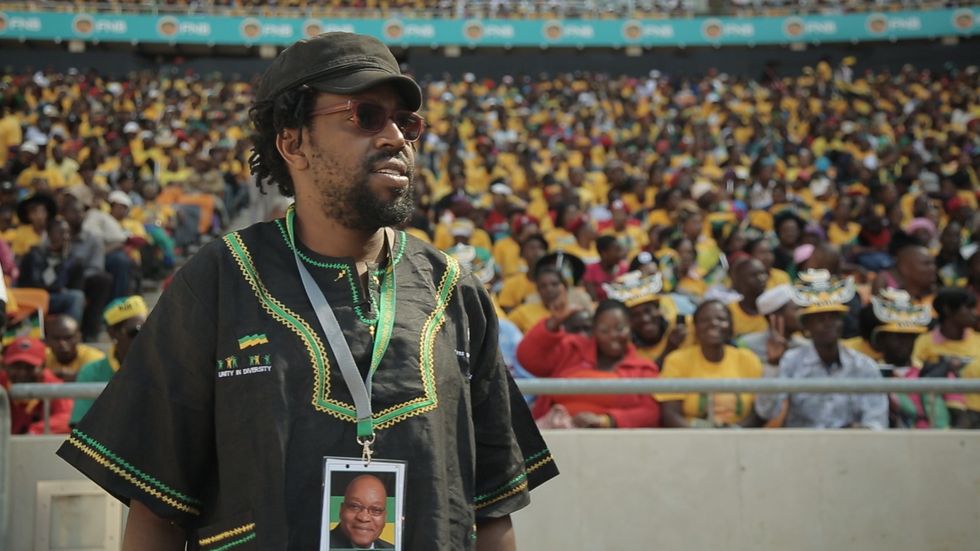 In the ninth installment of Okayafrica’s Cinema Africa series, we sit down with South African director John Barker following the world premiere of his political satire mockumentary feature, Wonder Boy for President, at the 37th Durban International Film Festival.

South Africans are about to become very familiar with the face and name of an ambitious new presidential hopeful. The candidate is actually the brainchild of an all-star team of South African comedians. Director John Barker’s full-length political satire, Wonder Boy for President, tells the story of a charismatic, albeit naive young man from the Eastern Cape (played by a hilarious Kagiso Lediga) who’s coerced into running for president by two shady ANC politicians (Ntosh Madlingozi and Tony Miyambo).

Stylistically, the mockumentary isThe Office set at the ANC’s Braamfontein branch. Shooting took place over the course of five years, and during that time the cast and crew managed to pull off miraculous undercover shoots at some of South Africa’s biggest political events and rallies. The likes of Zuma, Malema, Ramaphosa, Zille, Vavi and Shivambu all make cameo appearances.

With municipal elections coming up in August, the Wonder Boy team is plotting a real-life political campaign in conjunction with the film's 29 July opening in 35+ cinemas across South Africa. I caught up with Barker following the world premiere of Wonder Boy for President this past weekend at the 37th Durban International Film Festival.

Alyssa Klein for Okayafrica: How would you describe Wonder Boy for President to those that might not be so familiar with South African politics?

John Barker: It’s a political satire based on the current political landscape. It’s inclusive of all the parties.

How did the project come together?

Five years ago we went to the Mangaung conference, which is the conference that Jacob Zuma was reinstated for another four years. He was actually quite unpopular at the time, and coming from the great leaders like Nelson Mandela and Thabo Mbeki and with the ANC being such a great party, we felt like “honestly, is that the best guy we can get to lead our country?” Out of all these amazing leaders––females and males––is that really the best? We examined it and we said “no he’s not.” So for some reason, there’s a problem. There’s a problem with leadership. And then all the other things happened subsequently. The corruption got worse, Nkandla got worse, there were rape allegations. For us it’s just an awful representation of what we can do. We can have amazing leaders, and he’s just not one of them. It was nothing vindictive to the ANC at all, we just felt that our president wasn’t great and we wanted to make a film about it. As filmmakers we felt it’s necessary to comment on our surroundings, our society, and the zeitgeist, the political, that we needed to comment about those things and so we decided to make the film.

Because of the nature of the film, everyone turned us down for funding. So we went to all the established places that normally give money, and they turned us down. And I realised very soon that there’s no way this movie is going to get money from those traditional places. We’d have to go and get private investors to get involved. Surprising enough, no one really wanted to get involved. No one wants to touch the subject. And I think that shows in the fact that there’s only one political satire film at the moment in South Africa, ours. I would have thought there would be more. But it’s a tricky subject, people don’t want to do it. So it was hard to find funds.

What do you think the role of satire should be in South Africa?

What impact do you hope the film will have here?

Well, the reason that we chose to go before the elections is because we do want to have some kind of impact. There was a debate about whether we should go afterwards, because if we go before it will be seen as DA propaganda, which it’s not like that at all. We’ll get that criticism, but we’re prepared to take that and rather try and influence... For our little community of filmmakers, this is our way of saying “can we change the political landscape? Can we have a say on what happens?” So yes, we would love it to have some kind of influence. And the box office would be cool, but the priority is not the box office for us. It’s really about this, it’s about people talking about it and people having discussions around politics. We just wanted to be those guys that put that film out there in a funny way talking about serious issues but making it in a way that’s still entertaining for people to have a look at.

Can you speak at all on the upcoming Wonder Boy campaign?

Would you vote for Wonder Boy?