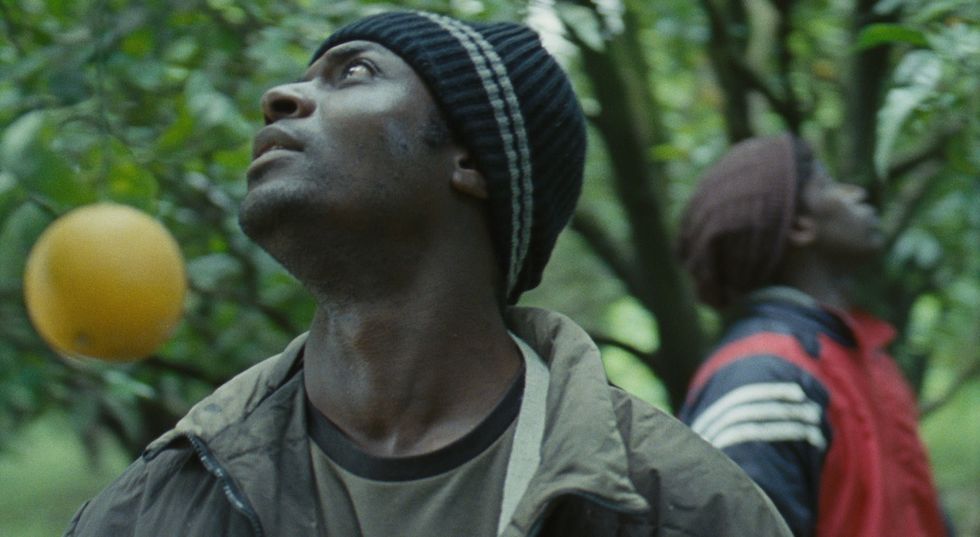 Mediterranea director and writer, Jonas Carpignano. Courtesy of the filmmaker.

In the sixth installment of Okayafrica’s Cinema Africa series, Sherif Awad sits down with Jonas Carpignano, writer and director of the 2015 migrant drama, ‘Mediterranea.’

Jonas Carpignano’s feature film debut is a timely story of African migration to Europe. The poignant docudrama follows two Burkinabé men, single father Ayiva (Koudous Seihon) and his close friend, Abas (Alassane Sy), as they make the perilous journey from Burkina Faso to Italy, where they encounter hostility, violence and a life contrary to the “promised land” they envisioned.

The film debuted at the International Critics’ Week section of Cannes last year before being picked up for a U.S. release and distribution by IFC/Sundance Selects. More recently, Mediterranea was nominated at the 2016 Spirit Awards in three categories: Best First Feature, Best First Screenplay and Best Male Lead.

Okayafrica contributor Sherif Awad spoke with the film’s writer and director over email for the latest installment of Cinema Africa.

Sherif Awad for Okayafrica: Where did the idea for Mediterranea come from?

Every year during the month of April many Africans try their luck onto crossing from Libya to Italy in canoes because the [Mediterranea] Sea is warmer and calmer. However, terrible shipwrecks occur and many lives are lost including those of women and children. Due to my own origins, I started to understand the history of these African migrants in Italy from a personal point of view. In fact, my mother is African-American and my father is Italian. I have always paid attention to the correlations between different ethnic groups and in particular the role of Africans in Italian society.

When the first riots erupted in Rosarno in 2010, I immediately went to Calabria in order to know the circumstances that led to the revolt. These events took historic significance because for the first time, the issue of racism came to the surface in Italy. Moreover, I started to interview people, collect their memories and listen to their personal stories. Then, I decided to settle down in Italy to write a screenplay on the subject. My meeting with Kudu Seihon (who plays Ayiva) was decisive. Not only did he become a close friend, but he also allowed me to enter this circle and he became the main character of my two films. The first result of our meeting was a short film called A Chjàna that focused on events and characters that led to the revolt.

How did this short then develop into a feature?

We were happy with the way A Chjàna was received. However, it remained for me that it was on the surface of things. I knew that this story deserved a real long film and I started to write it immediately in order to tell it from the beginning: the journey across the African desert and the arrival to European coasts. I wanted a closer look at the ambiguous relationship with migrants inside the Italian community. I stayed at Gioia Tauro (8 kilometers from Rosarno) to make my relationship with the migrant community grow. New people I met became new characters in the film. I had the feeling of having accumulated enough knowledge to make it work. On the other hand, we had the chance to find investors around the world who believed in the film.

What is escalating the migration crisis in Europe?

There are refugees in Syria and many Africans fleeing all sorts of problems because they have no other choice and, for them, it is a matter of life of death. The reason I chose Burkina Faso as the country of origin of the characters was to make them not fleeing imminent danger. They only want to work for a living and live a better life. If the character was a native of Syria, the reason for his departure would have been more obvious. The parallel story I was interested to tell in my film was that of the Italians who left Sicily and Calabria in hopes of better lives in the United States at the beginning of the 20th century. However, the difference is great between then and now because Italian immigration at that time was highly controlled and regulated. The south of Italy was then part of the Third World while New York and Chicago were already global cities. There was also a strong subjective desire that was fed by the communication systems then shown by the letters that migrants sent home and the articles published in the press who cultivated the dream of a better life. Today the media have changed, and yet it is through social networks and Facebook in particular that these new subjectivities appear.

What do African migrants think they can find in Europe?

The economy pushes migrants to leave their homelands in order to support their families in Africa. But let's not forget there are cultural factors that are equally important. Some of these migrants arrive with their religion and old traditions and some flee these religions and traditions. One of the great attractions of Europe for the young migrants is the opportunity to live another life. In my film, Ayiva wanted both: to maintain his family in Africa and to enjoy life whenever he can.

Why did you choose to make the title of the film in plural?

I wanted to make a film that captures the ordinary aspects of the migrant experience. Yes, there was fighting, violence, exaltation of a new life, but there also existed the chores of daily life like fatigue of work, friendship, fun to sing a song, or to get drunk. The film tries to capture the multiple elements in a conflicting environment. The title is in plural, because the Mediterranean is a place of encounters, conflicts, confrontations, and above all, a place that cannot be defined by borders.

How did you find the actor who plays the main character, Ayiva?

The actor who plays Ayiva is my roommate, my best friend and one of the most courageous and charismatic persons that I have ever met. When I went to Italy to cast my short film, the commemoration of the first anniversary of riots related to immigration took place and 600 African immigrants gathered. I I immediately saw Kudu [Koudous Seihon] in his leather jacket, with his megaphone in hand, challenging the crowd in French, English, Italian and Ghanaian. As soon as he knew the film was about him, Kudu discussed the character to adapt to different situations and write scenes which would correspond to his character. The character was a direct portrait because we spent five years on site, the script was constantly changing and so many scenes are inspired by stories that actually occurred, like the fight scene at the nightclub in the streets of Rosarno, where an Italian slaps one of the migrants. This fight really happened, and then served as an example to show how tensions were running high in the city.

The characters are on Facebook, Skype and try to buy an MP3 player. Why does technology play a distinct role in your film?

Going back again to migrants in America who came from south Italy, their only means was to communicate through writing. However, most of these Italian migrants were illiterate and they depended on the work of scribes. It was necessary time for these letters to be sent because there was a huge distance. Therefore, there were many obstacles to overcome in order to communicate. With today's digital technology, contacting people is direct and instant. Our conception of space and time are thereby changed. Facebook, Skype or Whatsapp became the means of survival of the migrant today.

Mediterranea is out now and available for purchase on iTunes here.

Sherif Awad is a film critic and curator based in Cairo.