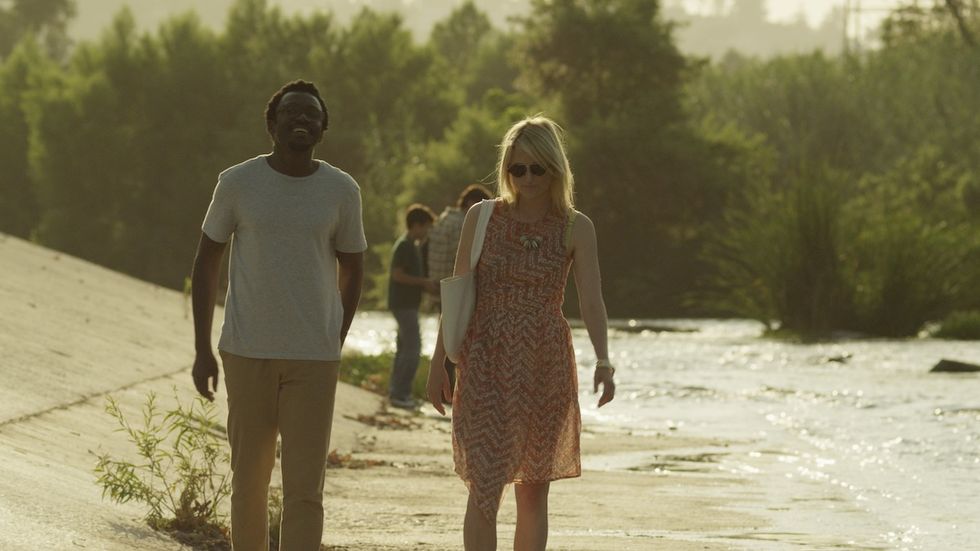 Echo Park, Amanda Marsalis’ directorial debut, is a film that pays homage to the East Los Angeles neighborhood of its namesake. Just as British expat Alex finds himself coming to terms with the fact that he’ll have to leave town due to his career dreams fizzling out, disenchanted new neighborhood resident Sophie walks into his life by way of a craigslist ad for his couch. The two go on to pursue a fleeting “no-risk situation” that turns into a meaningful relationship neither had anticipated.

The film premiered at the Los Angeles Film Festival in 2014 and is set to be released by Ava DuVernay’s distribution company ARRAY both in theaters and on Netflix on April 15th.

Charismatic multi-hyphenate Tony Okungbowa stars as Alex alongside Mamie Gummer’s Sophie. He also served as the film’s music supervisor, a producer, and was the catalyst behind the film’s story, which was formed around real events from his life in Echo Park. We caught up with Okungbowa over Skype to discuss the film, his ever-growing list of job titles, and what African visibility on screen means to him.

Neyat Yohannes for Okayafrica: How did you come to get involved with ARRAY and what drew you to this film?

Tony Okungbowa: Well, I have known Ava and Tilane [Jones] for a number of years now. They distributed my first film under [Ava’s] firm, which has now become ARRAY.

Yes. I was an executive producer on that and I was also in that. So that's how I met Ava and Tilane. And we've just obviously--those guys are about family--become this sort of extended family over the years. With this particular film, I came up with the story, I hired the writer, found the director--you know, the whole process. I called up Tilane one day and I was talking to her about some stuff and she was like “Oh, let's have a look at it." And that was how [Echo Park] happened. We were considering other people but once they jumped in the mix, not even a question.

As its title suggests, location seems to be at the crux of Echo Park. What is the relationship you have with your current location? With past locations?

Well, it's kind of funny you should ask that because you're in the Bay Area. I have some friends who actually just moved to Oakland from Brooklyn and I've heard the same stories that I heard when I lived in Brooklyn as I do when I am in Echo Park and as I do when I've been to Oakland. So the neighborhoods are very integral to the storyline but more importantly, it deals with some aspects of gentrification.

I know it's going on where you are--especially in San Francisco--but you know, I also don't think that all gentrification is bad. I feel like where gentrification becomes sort of problematic is when you do not respect the good that has been done there and you come in and just bogart and take over everything. So that's where the problem is. You get better grocery stores, better coffee, different types of people in the neighborhood, but the main thing is that one comes and respects the good that's been done there.

Drawing on a more fluid sense of the term “location,” what is your connection to the African Diaspora?

Well, it's so funny I've been having these conversations over the last few days during interviews and for me, it's actually very simple: I just don't see African images on screen and I need to see them on screen. It doesn't have to be the central focus of the story or the plot line or anything, it just has to be that the actor or that character happens to be African. Simple. There's no flag-waving, there's no chanting. I mean in Echo Park, we don't touch on it. He just happens to be. The story would work perfectly okay if he was a white guy.

So sometimes for African viewers it's just the visibility that's enough and being able to relate to the character--not necessarily because they have all of these African struggles.

Actually, for me, that's so crucially important. In terms of the struggle thing, we all have struggles in the world, everybody has struggles. The problem is for me, anyway, we are disproportionately represented in the struggle column when it comes to film. So every film that comes out of Africa is about struggle. I personally am fed up with it. I mean, trust me, there's struggle in America, if not there wouldn't be the rise of Bernie Sanders or Donald Trump--there's struggle. But every film doesn't focus on the struggle. To take it a step further, and I'm not saying this is not the reality of some people--but it's not the reality of all Africans--I never saw a war. I've never seen guns and child soldiers and pillaging and burning. I've never seen any of it. Not to say it doesn't exist. But I'm just saying, if it exists in Africa, I am African and I've lived there, but I never saw it. So let's see that side of it as well. Let's balance it out.

Considering your past roles in Nigerian films like Mother of George and Restless City, do you think you’ll do more projects that incorporate your roots?

I mean, yeah. Andrew [Dosunmu] is like me. He was born in England, educated in Nigeria, lives in New York. So he's like my brother. And he's done the first two films you mentioned, Restless City and Mother of George. They're just stories of people we knew growing up. So that was that. Mother of George, you could literally put a Chinese family in place there and it would work. Or a Russian family would totally work--it was more an immigrant story. But like I said earlier, I don't feel like I have to wave a flag or pump my fists. By virtue of me just being in the movie and being the character from so-and-so place who happens to be a lawyer, a doctor, an engineer, a policeman, a spy, a double-agent--whatever it is--but he happens to be a guy of color from a certain region of the world, I feel that's more powerful.

If you were to think about it like this: you have a young nephew/niece/child, somebody who's watching a film, and they turn on the television and don't understand a word of what's being said. But all they look at are those images and the images they see are of kids running through the jungle carrying guns or a few white protagonists taking care of thousands of Africans. What are they learning from those images? Forget the dialogue, what are they learning from those images? I feel images are way, way, more important than you like to give them credit for. The images are so powerful and if you don't see yourself on TV represented in a certain way, you start believing the images you see on television and you [say] okay, if I'm supposed to be a girl who has to take off her clothes in music videos--if that's the only way forward for me--that's what I'm gonna do. Or if I'm going to be the drug dealer portrayed in a movie, that's what I'm gonna be. So I think images are very important.

You were the music supervisor on Echo Park. What was that like? Did you have anything to do with the Prince White Label featured in the film?

You can see behind me, right [chuckles and motions toward his massive record collection]? Yeah, that has a little bit to do with it. So the music supervision situation happened in kind of droves. There was another friend of mine called Timaj--who's actually from Ethiopia--and she helped a lot with some of the clearance issues. And then there was another woman called Simone Rubi who actually sang the opening song and she got us the last song of the film by Gungor. But overall, 95% of the music is from unsigned artists and because we didn't have a budget, what I did was I reached out to my Twitter following and friends and family and people I knew and I said, any artist who's unsigned and wants to have their song or music featured in a film, send me stuff. I'm looking for this type of genre and this type of genre and we found some gems. We found people like Nick Leng and we found people like Dunson and there's a plethora of them. One of the things that I really am proud of the film about is definitely the music. There's only one signed artists--Sylvie Lewis.

You’ve done television, film, theatre, you produce, and of course you served as Ellen’s resident DJ for a decade. Looking forward, do you see yourself remaining in the chaotic multi-hyphenate realm or do you plan to focus your energy on one passion?

I think I'm gonna stay here. I'm having too much fun and I feel we are in a day and age where you don't have to do just one thing anymore. You know what I mean? Of course, I'm African, I've probably got ten jobs. But I'm sure you have a couple of other passions and things you're doing and pursuing, as most of my friends do even if they have regular jobs. They are doing other things. And I just feel that sort of paradigm of work in a company for 25 years, get a rolex, retire--it's kind of old. It's really old, so I'm embracing this. It's not as easy, that's for sure, but I have a bunch of projects we're developing and hopefully one triggers the other. Sometimes you get to situations where you're like, okay, which one is bringing in the finance? So let me first pay the bills and then I can sort of dabble.

Finally, do you have any future projects in the works that we can get excited about?

Oh yeah, we're developing a television show, myself and Andrew [Dosunmu]. Also he directed a movie, Thanksgiving--which, they're still editing--with Michelle Pfeiffer and Kiefer Sutherland and myself so we're trying to get that one done. And we're in talks of another project, which is actually about some Nigerian women. So there's a lot going on. Let's see which one catches the heat first.

And is there anything else you'd like throw into the world?

I guess I just have to say that I am incredibly humbled and incredibly grateful for the support I get from the community in the diaspora and I don't take it for granted--I'm so thankful for it. And I'm really looking forward to a time when the continent bursts wide open. And I mean, infrastructure is a problem and we need to work on that a little bit in terms of more cinemas and better quality television, but there's a lot coming through right now and I'm just incredibly humbled to bear witness to the start of it. And the support that I get [from the diaspora], more than anyplace else, it just puts chills down my spine when I get these emails, and it really does make me happy so I'm grateful and thankful.

Echo Park is in theaters starting April 15th. Find out more information on the film's release via Array.