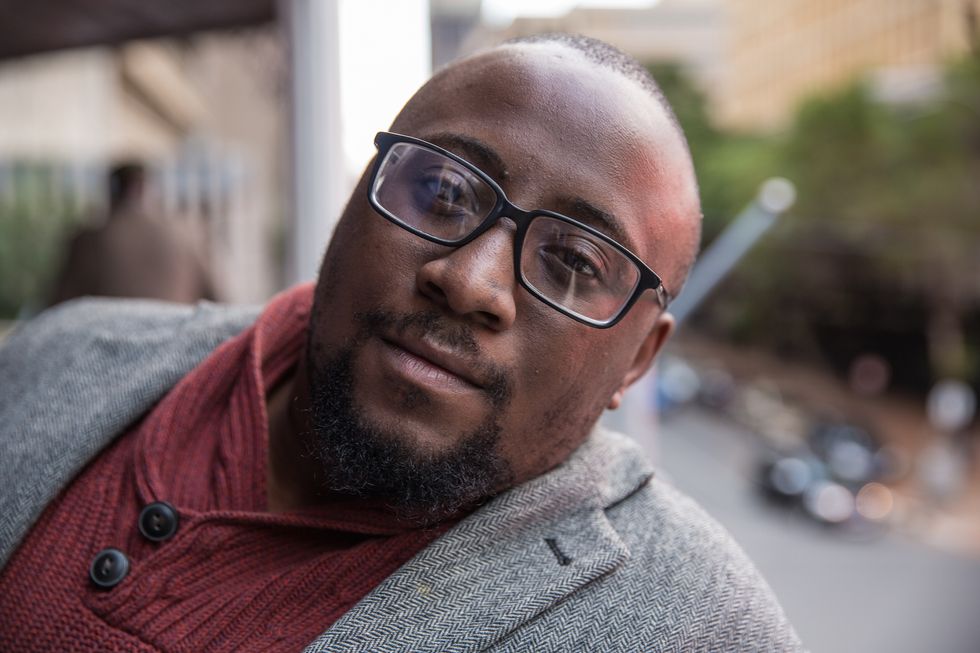 The South African political satire 'Wonder Boy for President' opens in cinemas nationwide. We get to know one of the film's stars.

In this instalment of Cinema Africa, we sit down with South African actor Tony Miyambo following the world premiere of Wonder Boy For President at the 37th Durban International Film Festival.

Look around Braamfontein this week and you’re certain to come across South Africa’s most exciting, albeit mysterious, new political player. The candidate in question goes by the name of Wonder Boy. And he’s about to shake up South Africa’s political landscape. But here’s the thing: he’s not actually running in next week’s municipal elections.

The dreadlocked politician from the Eastern Cape is the title character of director John Barker’s new mockumentary-style political satire, Wonder Boy For President. In the film, Wonder Boy (Kagiso Lediga) is recruited by two shady ANC stalwarts, Brutus and Shakes, to become the ANC’s next big hope.

Brutus is played by hilarious newcomer Tony Miyambo, a 28-year-old with a theatre background from Thembiso. I caught up with Miyambo in Durban following Wonder Boy’s world premiere at the Durban International Film Festival.

Tell us about your role in Wonder Boy For President...

I play the role of Brutus, who is really an ambitious young politician who goes about things in a not so legal way.

You were 23 when you started shooting Wonder Boy. What’s changed in South Africa in those five years?

It’s become much more of a robust political landscape. A lot more young people are making commentary and taking ownership of the political space and political commentary. It’s opened up from just being an elite critical mass. Social media has allowed us to interact with each other, to debate with each other, to share things and fight and disagree on things. It’s encouraged me to find a way in which I can add my voice to the debate and my voice to the commentary. The film has really allowed me to do that.

What you guys did with hijacking several political rallies and events reminds me of Sacha Baron Cohen’s guerrilla filmmaking tactics. Can you speak at all on the guerrilla style of the film?

I never imagined I would do something like that. In fact, that was the first time I’ve ever engaged in the political rally space. You’re entering that space, and you know you’re there to make a film. Nobody else knows it. But it’s weird because once you’re in a stadium full of 90 000 people, you get caught up in that energy. There’s a weird relationship, because then you start seeing yourself in that space, and as an important person in that space. But you always have to come back and be reminded that you’re there to make a film.

I think it was very brave and stupid of us at the same time to do what we did. But also, it just added something to the film that we could have never recreated on a production set. There was something so real about those spaces, and the people in those spaces, and the way in which we engage. More than anything, it was us the actors; not the character of Brutus; it was actually me, Tony, engaging and being part of that space and immersing myself in that space. And that for me was a really beautiful thing that we had the freedom of doing.

Why do you think it’s an important film for South Africans to see?

It’s fearless and it’s trying to turn a mirror to ordinary South Africans and allow them to laugh at themselves, but also to be aware of the world that we live in and the contradictions that it has.

And people should go and laugh, and they can decide what they do from that point onwards. It’s an important voice to add, and I think the form gives it the freedom to explore the three-dimensionality of issues as opposed to trying to engage in issues in one particular way. Which is what I think people who don’t want other people to know the truth want to do. They want you to explore the truth in their own way. The film is our truth. It’s the truth of many young people. It’s an important way to start a conversation.

What do you think it’s inherently a film about?

For me it’s a film about what the individual can do to stay true to themselves. The pressures of wanting to be part of something and allowing whatever it is to take you astray. Brutus chose his evolution in a certain way. Wonder Boy chooses his evolution in a certain way. It’s about the choices that the individual makes and how those then become a combined narrative of a greater number of people.

The film is about being aware of the power. There’s always an agenda, there’s always certain power relations, there’s always a particular way in which we need to unpack that before we enter a space where we’re directly responsible for the lives of a municipality, of a ward, of a province, of a country. It’s about personal accountability, and really understanding the self before you put the self in a place where they make the kind of decisions that affect a whole lot of people.

Would you vote for Wonder Boy?

I wouldn’t [laughs]. Unfortunately I’m a bit more politically conscious. Wonder Boy, as well meaning as he is, his manifest was a little bit pathetic, and a little bit on the odd side. But funny thing is it depends on what context I’m voting for him in. I wouldn’t vote for him nationally, but in a ward, give him a few years and I think if he learned the structures, with his well-meaning heart, then maybe I could vote for him there. It’s complicated. But it’s always good to have new opposition. The masses love Wonder Boy, but you also have to question this mass mindset where you just want to be part of something so badly that you don’t actually think about the repercussions of what it may mean in the long term.

Wonder Boy For President opens in cinemas across South Africa on 29 July.