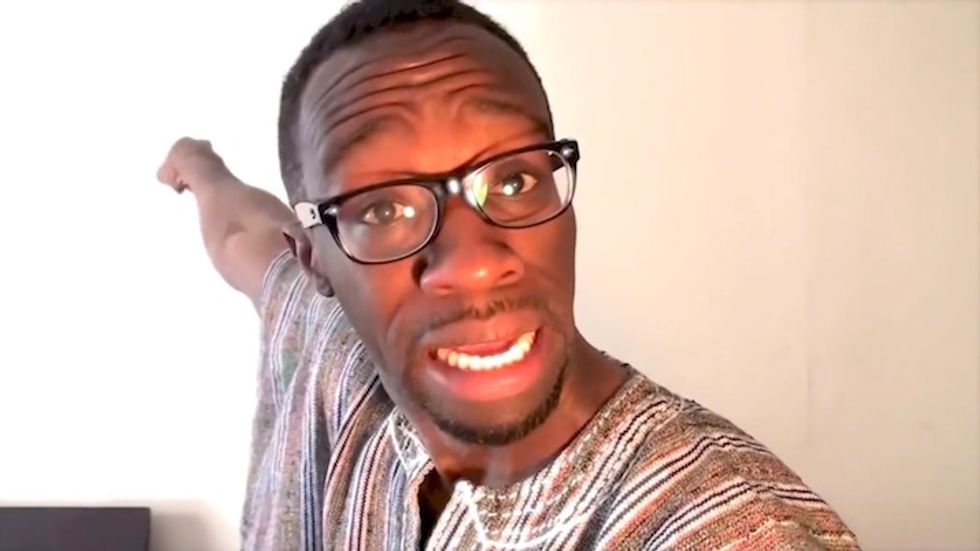 Screenshot from "Never Piss An African Off!!!"

Clifford Owusu is a Ghanaian comedian, entertainer, and YouTube sensation whose dancing, humor, and positivity have won over African and non-African viewers alike. Clifford has appeared on Good Morning America, traveled internationally to share his trademark humor, and had his videos featured on BuzzFeed. A firm believer in the ability of dancing to bring people together, he infuses his videos with elements of his culture that include music, comedy, and an African dad impersonation that’s so accurate it feels familiar. I caught up with him to talk YouTube, inspiration, African parents, and what’s up next.

Hannah Giorgis for Okayafrica: When did you first start making videos and what inspired you?

Clifford Owusu: Around 2007. I had just graduated from college. My friends and I used to post videos on Facebook all the time, we used to do a lot of dancing to music. Then in 2007, my friend recorded me dancing (it’s still on YouTube). It’s a very old video; I hate it but it’s still on there. Nana Boateng, my best friend and manager (also the person I’m ignoring in the video where my phone goes off and my ringtone keeps me from picking it up), will not take it off. He posted the video back then, and it went off—so we thought there might be something to this video thing. Honestly, I really do enjoy just making people happy—that’s really it, no other motive. That's what inspires me. I like to see people smile. Do you know how powerful a person is that can people smile? They can get whatever they want. If my girlfriend has a guy friend who’s really funny, I would tell her she can’t be friends with him anymore because he could steal her heart at any moment. [laughs]

OKA: You make a lot of videos about being an African in the US. Where on the continent is your family from? What do you think is unique about the experience of being African in America?

Owusu: My family is from Ghana. I was born in Tema, and I came to the US when I was 6. Back in junior high, being African was one of those things people I was growing up with weren’t proud of. People made a lot of jokes about us—everything you can think of. There was no honor, it wasn’t something to be happy about. A lot of people tried to adapt to the culture here, but I couldn’t because my parents were so African that there was nothing I could do to hide it. [laughs] My mom was so protective, she used to walk me to school every day. Fast forward to now: now everybody loves Africans. At the age I’m at right now, for me there is no better feeling than being African. I love the culture. I feel very connected to it even though I’m not back home. My home right is still filled with my culture because my parents never took me out of it. It’s a blessing to be in touch with my culture.

OKA: When was the last time you were in Ghana? Have your videos allowed you to connect with other Africans?

Owusu: In 2011, I was there for 2 weeks to see family. I went back like a tourist; I didn’t know anything or anyone. My relatives took me around like I was a tourist, and I loved it. They were so pressed to show me Accra Mall, and things that are more western developed. But I wanted to see the market, see my people, see the way they interact. It was an amazing experience. Yes, my videos have allowed me to connect with Africans and non-Africans all over the world. They refer to me as [laughs] “you--the guy who dances all the time!” They always say that one line that makes it worth it: “you make me so happy.” That’s why I do this. It’s a blessing, because before my connections used to be very local.

OKA: Does your dad watch your videos? How does he feel about your impersonation of him?

Owusu: He watches all of my videos, and he reads every comment. If you write something, he’ll read it. If you write something that said “Cliff, what you did offended me,” he’ll tell me the next day. He laughs because he’s not like the character. He finds it funny because he knows other people that act that way—my dad, trust me, he’s very funny. But he’s very calm. The only thing that’s like him is the no nonsense and the way he issues punishments.

OKA: Where do you get the ideas for your videos? How do you decide what music to use?

Owusu: The ideas just come--it’s everyday things that happen to me. It’s always stuff I dealt with growing up that I would just turn into a video. The excitement of what happened I would just turn into a dance. The African dad stuff is more real scenarios that Africans have dealt with. I make it real dramatic so it’s funny but it’s real life stuff. My favorite story is the cell phone video: I was driving home from work. iTunes radio started playing “Zoblazo,” and I thought “I love this song and I have to use it in a video.” At the same time, Nana called me and I couldn’t pick up the phone because I was driving and I thought to myself when I go home I have to make a video. It’s 35 seconds but took me 2 hours. We all had that ringtone back in the day that made us want to dance. For African dad videos, most of the time at the end I like to use really popular songs that other Africans know. My real motive with putting those songs there is to expose other people to our music.

Owusu: There’s too many! My favorite part has to be the creative process. It’s very easy to become one way and just keep doing the same thing over and over and over again. I love the actual production of it because I do everything—when you see different angles, that’s me putting the camera on my desk or my dresser or counter. I love the editing too. But the ultimate happiness is when you put something up and the response comes. When I put something up, I take a walk for 15 minutes and then come back and hit refresh. I love the responses from my viewers, who are like my friends. They are so good to me.

Owusu: Very stressful. I’m very hard on myself. Sometimes I need to talk to Nana; he calms me down. It starts with coming up with an idea—that’s the hardest part, the idea. Acting and production is easy, but the idea is hard. Sometimes I go days without an idea and I get upset with myself. I’ll be at work having a hard time focusing like “Cliff, that’s it, we’re done? Is that the end of my career?” Nobody knows this. Every week I put up a video smiling and that’s what people see. Inspiration can come from anywhere. You might say something, at work someone might say something, my dad or someone at church might say something. Then I go home and turn it into a video. And we all laugh and smile together.

OKA: What has the response to your videos been like outside your family, in your broader community?

Owusu: When I first started this, everyone looked at me like I was stupid and what I was doing was foolish. One thing that I always tell young adults who are trying to do something outside of what “normal” people do is that when people tell you you’re too confident or too cocky, tell them “yes and thank you.” That’s because my confidence level is the reason why I kept doing what I was doing—because I kept believing in myself. I believed in myself so much so that when people told me I couldn’t do this, I just would say okay and keep going anyway. Sometimes it feels like your friends and family are not going to support you until strangers do. Then everyone will. People in church used to tell me to stop all the time. Now everyone who used to tell me to stop is telling me keep doing it, you’re doing it well. When I was featured on Good Morning America, that’s when everyone was like “OMG.” now everyone is like “God will bless you.” [laughs] There was nothing anyone could tell me that could stop me; this was a hobby I really loved. The same way someone else might go play basketball as a hobby--for me, making videos was my downtime. Now I’m in a good place. Everyone is supportive.

OKA: What should we expect from you in the future?

Owusu: I can't give away the big stuff but I will continue doing what I’m doing. It’s just going to be on a bigger stage. Every day it gets better and better, and the thing is…I know it’s destined to happen. All I need the most is for people to support me and keep me in their prayers and heart, and I promise I will never ever change when it comes to my culture, I will never have anything but the utmost respect for African culture—even on the moon my heart will still bleed red, green and black. That's the African colors right? [laughs]

Hannah Giorgis is the daughter of Ethiopian and Eritrean immigrants and a product of bittersweet diaspora. She is a black feminist writer and organizer based in New York City, and a regular contributor to The Guardian US’s opinion section. You can follow her on twitter @ethiopiennesays or on her blog, Ethiopienne.