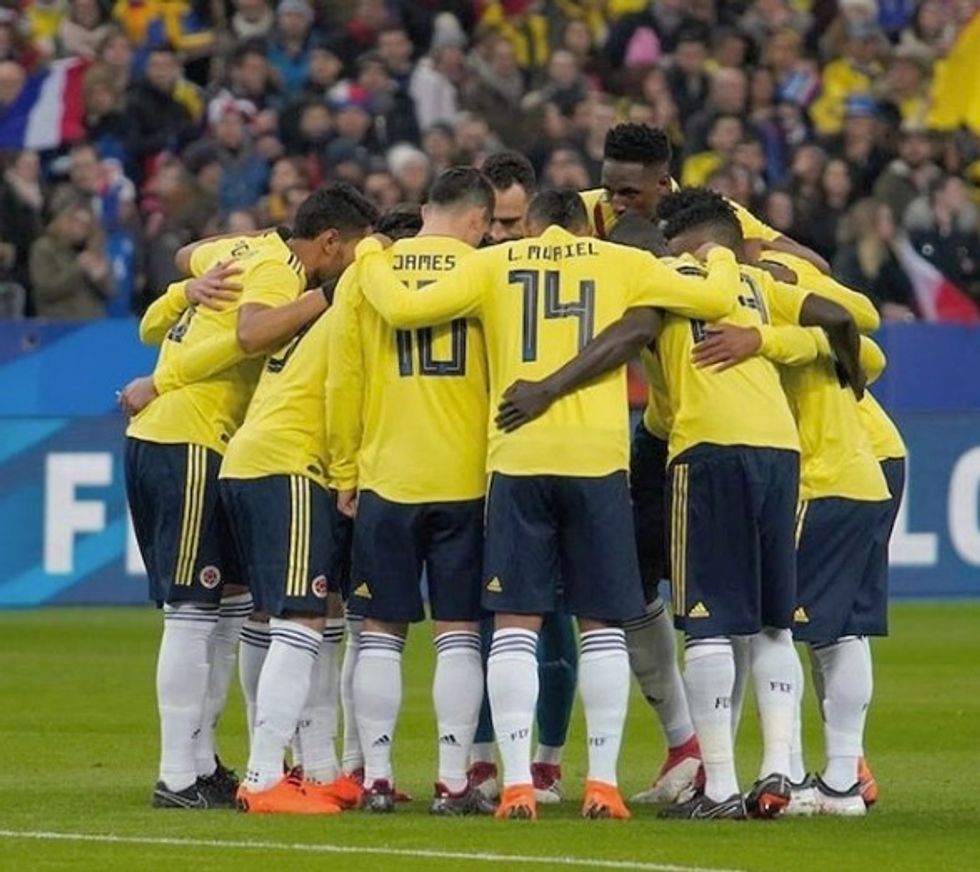 This Colombian team, once again, will have a large contingent of black Colombians playing fundamental roles. Their stories might be a perfect example of what's at stake both at the World Cup and for the future of the country.

Colombia will be back at this summer's World Cup in Russia, and after a historical performance four years ago, the country is hopeful for what the national team can bring this time around. Although the squad has changed from the one that played in the Brazil World Cup, this younger side, led by Radamel Falcao García and James Rodríguez, seems to be up to the task of trying to surpass the success from four years ago.

What hasn't changed, however, is the fact that this Colombian team, once again, will have a large contingent of black Colombians playing fundamental roles. And their stories might be a perfect example of what's at stake for Colombia both at the World Cup and for the future of the country.

Colombia's defense will be almost completely formed by people from neighboring towns in the Cauca region in southwestern Colombia. Thanks to its mountain hideouts and its useful coastline, for decades, this was one of the Revolutionary Armed Forces of Colombia (FARC) guerrilla main areas of operation, and its largely indigenous and black population usually only made national news when they fell victims to guerrilla attacks.

Fullback Cristian Zapata, who plays for AC Milan in Italy, comes from Padilla, while centerbacks Yerry Mina (currently at Barcelona) and Dávinson Sánchez (who plays for Tottenham Hotspurs), are from Guachené and Caloto, respectively.

All of them are black Colombians who could have suffered a violent fate if they hadn't come into professional football. In 2011, for example, FARC's leader Alfonso Cano escaped the Colombian army through Guachené, coming dangerously close to Mina's house. In 2013, Zapata's aunt was kidnapped in Padilla, and the footballer was demanded a ransom for her freedom—he didn't pay, but she was freed; a few months later, one of Zapata's cousins was jailed for the kidnapping.

But perhaps the black Colombian player with the highest profile at the World Cup will be Juventus' Juan Guillermo Cuadrado, a free-flowing midfielder with a knack to both confuse and frustrate opposing defenders.

Cuadrado grew up in Necoclí, a town in the Antioquia region and in a zone known as Urabá, very close to the border with Panama. Because of this proximity, the region has been a hotspot of drug smuggling gangs, especially of those affiliated to the right-wing paramilitaries that still operate there, even if they officially demobilized in 2007.

There, in 1992, when Cuadrado was four years old, a paramilitary group started firing in his town as part of a "social cleansing"—an attack designed to eliminate supposed leftist supporters and instill fear. Cuadrado hid under his bed, but when the fire was over, he saw his father had been killed outside of his house.

All of them will carry the weight of the country's tragic past as they try to bring Colombia to victory. While the country will rally behind them, united in the hope of a national sporting triumph, it is not clear if the stories of those like them, who grew up mostly forgotten by the Colombian state, can unite a seemingly irreconcilable political country.

This time around, too, a deeply divided Colombia will elect a new president while its national team plays at the World Cup and looks to bring together a nation painfully separated by decades of conflict.

Colombia will debut on June 19 against Japan, just two days later after the presidential elections between right-wing candidate Iván Duque and left-wing candidate Gustavo Petro. Duque was chosen by former president Álvaro Uribe to represent his party, Centro Democrático in this year's elections.

Uribe and his party were the main opposition to the historic peace deal signed by current president Juan Manuel Santos and the FARC guerrilla, which put an end to more than five decades of conflict between the Colombian state and that armed group.

Duque has maintained his opposition and has claimed that he would severely alter the deal if he's elected. Petro—who had a controversial stint as mayor of Bogotá—has promised to maintain the peace deal, although his campaign has focused on other issues, mainly on moving the Colombian economy and institutions to the left.

But this difference has bitterly divided Colombians in the last few weeks, reviving a two-year-old argument, from the time when Colombians narrowly voted to reject the peace deal in 2016. Since peace negotiations began with FARC in 2012, fewer Colombians have died violently, but at the price of not bringing certain people who orchestrated inhumane crimes to justice. And since FARC combatants gave up their weapons, other illegally armed groups—especially neo-paramilitary gangs known as Bacrim—have taken over their drug routes and have been terrorizing social activists in places where they couldn't reach before because of the guerrillas.

Should Colombia continue its planned post-conflict, or should it take a completely different direction? For urban Colombians—who constitute the majority of the population and are more concerned with issues relating to the economy, or to political institutions—this is more or less a mere theoretical question. But for the people who live in the rural and semi-urban towns from where many of the national team's black players come from, this might be a question for life and death.

While a united Colombia will take upon the field in Saransk, the black, indigenous, and poor Colombia that gave us many of our national players will likely be hoping that the political Colombia would be just as united.