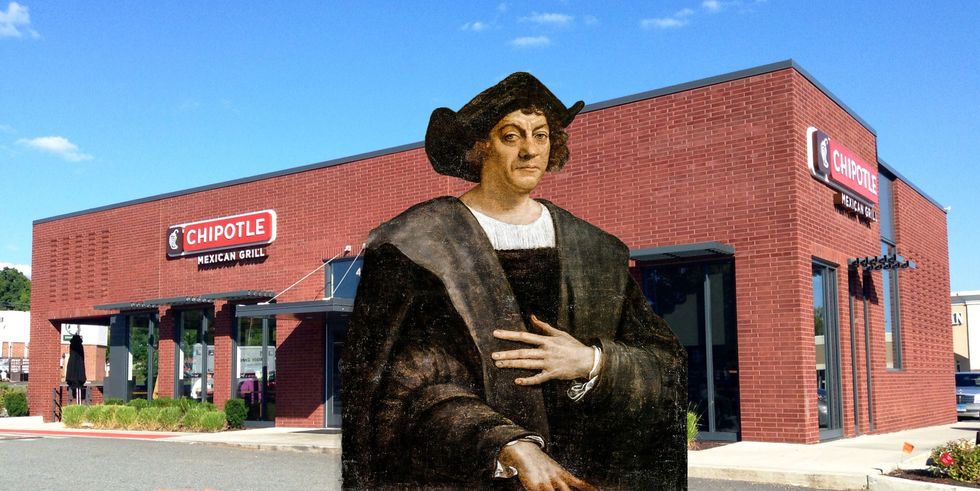 In which we do a close read of the Wall Street Journal’s moronic Columbus Day op-ed.

It’s become a cliché to trash Columbus Day as a memorial to a real asshole.

This article is something different. We’re looking at how a white narrator, despite the odds, can manage to block out all evidence of other narratives on his own. Our case study this Columbus Day comes from David Tucker of Ashland University—a scholar in the fields of Religion in American History, Terrorism and Irregular Warfare—who has written one of the more egregious articles in the genre.

Knowing full well that the Wall Street Journal’s op-ed page is one big trollfest—sorry—we’ve decided to take a deeper look at it in an attempt to get a better idea of what’s going on in the white academic mind.

Screengrab from the Wall Street Journal

In Tucker’s classical worldview, the globe is divided into great blocks of antagonistic civilizations: Europe, China and Muslims. This version of the world existed in a state of violent chaos until the European age of enlightenment gave everyone the values of democracy and equality. You might call this version of history “how a cabal of European men defined entirely what it means to be an autonomous human being.”

Columbus Day used to be a celebration of the enterprising courage of Christopher Columbus and other explorers who set out into the unknown and began the long process of establishing civilization in a new part of the world. That triumphalist account will no longer do.

Does he believe this or is it a prop meant to be easily toppled? It’s a prop. He goes on:

Compared with the Muslims and Chinese, the Europeans were poor, backward and weak. The Europeans suffered as the weak always do. Terrible plagues from Asia brought by commerce devastated Europe. An estimated 100 million people died, as would many more, even as the Europeans began settling in the Western hemisphere.

Europeans also suffered from slavery. For many years, Europe’s most valuable export to the Middle East was its own people, sold as slaves by the Vikings who had conquered them and settled in to rule. The English word “slave” comes from a word still used to describe some Eastern Europeans, “Slav.” In the period from 1530 to 1780, Muslim raiders captured and enslaved an estimated one million or more Europeans.

Nevermind the dubious statistics here. I think we need to seriously question what Europe is, who exactly Europeans are and what it means for Vikings to sell their “own people” the Slavs into slavery. This promontory of Asia barely has a unified sense of identity now, let alone in the sixteenth century, making this line about Vikings completely absurd.

The Europeans who conquered the Western hemisphere acted as people had always acted, no better or no worse; those they conquered suffered as the Europeans themselves had suffered.

This is the argument you will hear coming from self-proclaimed race-realists on internet message boards. It misses the entire point of our contemporary distaste for Columbus. Nobody claims that Europeans throughout time haven’t suffered and that Columbus was morally worse than say, Genghis Khan. Literally no one argues that.

What Tucker can’t understand is that Columbus is not a man lost to history but a symbolically important figure at the genesis of a global system of racial domination that exists today in very real material terms. Columbus’ administration of Hispaniola with its savage genocide of the native population, the slavery and the perverse racial norms that evolved out of the imperialist need for New World exploitation is, as the basis for a holiday, a disgusting face slap to people who still live with the results of the conquest. In other words, Columbus is now.

Even as the conquest was reaching its zenith in the 19th century, the Europeans were bringing to the world the then-novel idea that one group of people didn’t have the right to impose its will on another group. This revolution in thinking, which ultimately undermined European imperialism, was announced by the Declaration of Independence and its assertion of the self-evident truth of human equality.

Here is the nut of Tucker’s non-revisionism—that whatever Columbus’ crimes, he introduced European domination into the New World setting the stage for the dissemination of European enlightenment thinking that eventually overturned European domination. If that seems upside down it’s because it is.

It’s a startlingly myopic, yet common understanding of the world that only works if black and indigenous historical characters are seen as essentially blank canvases, devoid of agency. People for whom the “self-evident” truths were not all that evident until bestowed upon them by Thomas Jefferson or some other big man of history. Tucker can’t imagine enslaved Africans conceptualizing their own humanity without, say, having read John Locke.