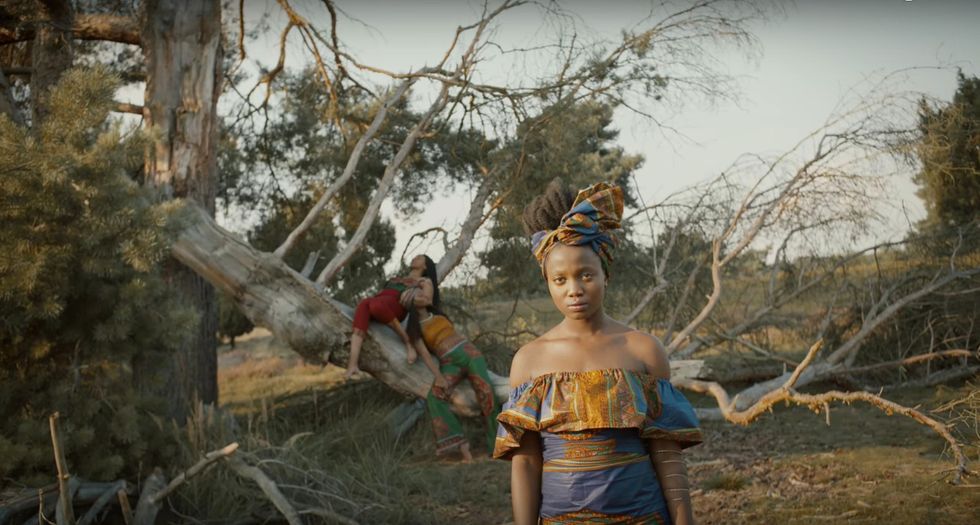 Congolese-German artist Flockey Ocscor can dance. A quick look at his Instagram page might turn into a long one. There's multiple videos of Flockey frantically moving to songs, some are set to popular tracks like Migos' "Bad and Boujee" while others are more interpretive numbers.

Though Flockey makes music and videos, he remarked that "Everything started first with dancing. My dad & the Congolese church back then was the inspiration for me to get in touch with music… my dad always loved to hear music of Papa Wemba & showed me old footage of Viva la Musica, which is Papa Wemba's group. That was like the soul train in Congo for me, so everything started with that. I used to take part in dance battles. Now I try to find myself more deep knowledge art."

Flockey told me had a dream one night: he was young and he was at church with his family "and suddenly everything escalated very fast." That escalation turned into the spoken word piece "Bitter Dream."

Flockey then came across the Canadian jazz group BADBADNOTGOOD's fluttering track "Cashmere" and knew that his words had found good company. He later performed the piece in Berlin.

"After the performance, I felt like this is not just a performance for me... this is the first time I speak with the audience about our legacy… my life and when my mom showed me a graphic video of Congo I told myself to shoot a video about it," Flockey mentions.

He then contacted BADBADNOTGOOD's management about using the track for a video he was thinking about creating. They agreed.

The gorgeous video, which was shot in Germany, feels like a short film. It begins in a room with white walls, Flockey sitting in a beige chair with his eyes closed. The music starts, Flockey's eyes jump open and he recounts his story of family, love, and struggle. The piece moves through disparate, opposing and reinforcing scenes that illustrate a striking picture of the beauty and horror of humanity. Walking to school with friends, a budding romance, all then disturbed by war.

"My parents had to escape the civil war back then.. the situation will be seen almost at the end of my video with these rebels... that's the violence of Congo.. being kidnapped, kids being forced to kill innocent people by others. The politics & protest… that's the danger of Congo. That was about 30 years ago, when my parents had to escape and unfortunately my mom [is] still showing footage [of] what's going on in my country... it's not ending. To never forget what we've been going through and make the best out of it."

The inspiration for the piece, Flockey explains, was the 1992 film Sarafina!, which was directed by Darrell Roodt and starred Whoopi Goldberg, and the 2015 film Beasts of No Nation.

Flockey described the piece as standing "for the culture of Congo. My family's legacy and the reason why my parents had to escape Congo because of the civil war… so it's something very personal. You also have the beautiful side… the bantus… I speak about the Congolese culture. The church… beautiful Black women… But then everything switches into the darkness… the war. That's the bitter end."

The track, which is featured on BADBADNOTGOOD's fourth studio album IV, was released in 2016 and is definitely worth a listen. Head to Apple Music, Spotify or YouTube to check it out.

This interview was edited for clarity.