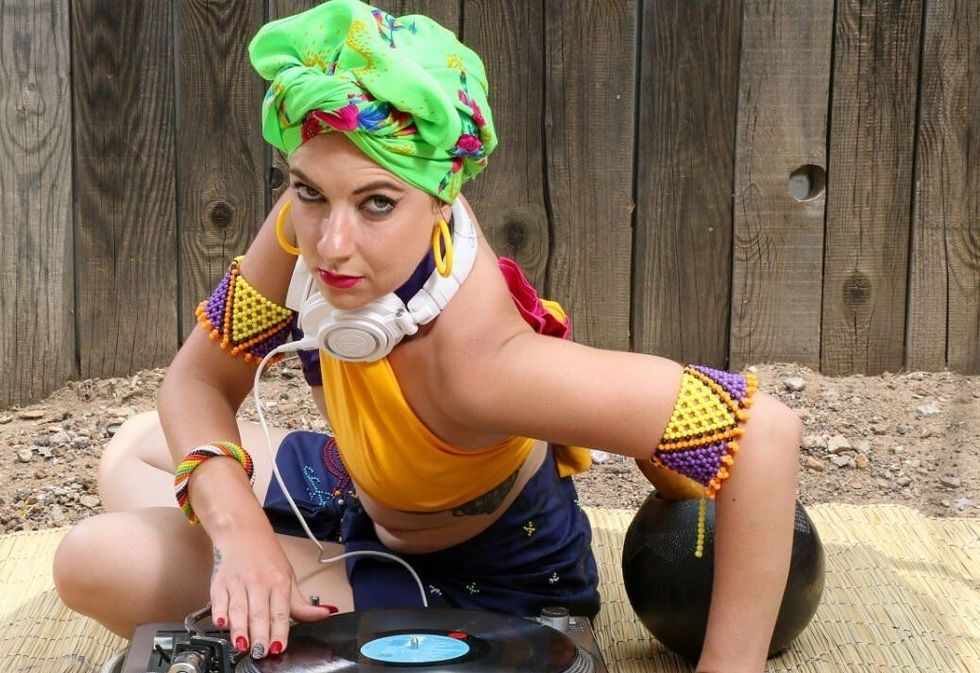 "I get rejected for not being black enough and being too black to be white...I'm a #KasiMlungu and I'm proud."

This is one of many tweets by South African Anita Ronge, aka DJ DuchAz, that has had Black South Africans on Twitter up in arms. In case you're wondering why—she's white.

When I first heard about this, I laughed really hard because I thought it was a genuine joke—because, you know, how does a bonafide white woman claim to be black? But after reading her tweets myself, I realized she was being quite serious. Now, no one is taking away from the fact that she grew up in the kasi or township, areas of residence designated to black people during Apartheid.

I had to swop my green tea for Mqombothi this morning after #KasiMlungu ?

We're also not disputing that she, having grown up around black people, eats black food and relates to black culture, especially black women. No, the problem here is not her appreciation of black culture, but her appropriation of it. DJ DuchAz can have the cornrows and headwrap to match; man—she can even get down on the dance floor like us and pat her weave in the dramatic fashion that only a black woman can—but she will never be black no matter how believable a black woman she feels she is.

Firstly, one does not become black, one is born black and there's not much one can do to change that. And given the many hardships that black people have had and still have to go through daily, in a country with a history of racial segregation like South Africa, DJ DuchAz's claim, as a white woman coming from a place of tremendous privilege, is extremely disrespectful. Blackness to her is something she can dress up in and then remove as she pleases like a garment. She can wake up and choose to live in a skin that carries a legacy of oppression and her ability to even choose that is testament to her privilege.

I get rejected for not being "black enough" and being "too black" to be white... I'm #KasiMlungu & I'm proud. pic.twitter.com/DzEM9Cgwc1

Many black South Africans have taken to Twitter to ask her all sorts of questions about quintessential elements of black life, if she can make umqombothi (traditional beer) or speak fluently in the beloved isiZulu and other quirks that most black people can relate to. And whilst many of these have been hilarious and have allowed some comic relief to a sensitive issue, DJ DuchAz has fired back claiming that black people appropriate western culture all the time and that she doesn't see anything wrong with her doing the same. Now the thing about cultural appropriation is that the culture doing the appropriating has to have both the privilege and the power to do so, something that black people do not and have never had. In fact, western culture has largely, through systems of white power and now especially the media, been imposed on black people over time; whereas black culture has simply been taken and without permission at that. So there's plenty of wrong in what she's doing.

@TheDuchAz Since you are black, what is this, what does it do and which church wears this uniform? ? pic.twitter.com/VVxRvcY9z9

However, whilst the appropriation of black culture is unfortunately nothing new, what #KasiMlungu does bring to the forefront is the interesting playing out of South African race politics on social media. Whilst we may be living in a democracy now and have to an extent, attempted to address the evils of the past, the divide between white and black is still evident. But with social media having become firmly rooted in our lives, the effort to have these important conversations between the two in safe spaces and face-to-face is largely waning.

Instead it is being replaced with the rushed and oftentimes rash statements inevitably lost in translation with just 140 characters at one's disposal. And this is not news. Last year we saw the likes of #PennySparrow and #NicoledeKlerk as well as many others using racial slurs and going on racist rants on social media in absolute full and unashamed view and I myself wondered why–what prompted such boldness? See we're moving into a space where everything that's been swept under the carpet for so long with regards to race is being hauled out and callously flaunted on social media without hesitation.

That #kasiMlungu reminds me of that transracial dude on Atlanta ??? pic.twitter.com/SMXPxFMVH5

Social media has become this wall behind which we stand safely and fling insult after insult with the assurance that all we need to do is duck at the right time and we'll live to post or tweet again. Increasingly, there's a new hashtag trending about race in South Africa and just as quickly as tempers flare up and passionate debates ensue, they are forgotten by the end of the day without any real mileage having been made in the space of constructive and earnest conversations.

Sure social media has allowed young South Africans to share information, opinions, engage in constructive discussions about their country and its ups and downs and mobilize for the greater good, but at the same time, it's prompted a culture that is reactionary. It only takes a minute or two to post or tweet and very often the gravity of it all is lost in the brevity of social media.

The conversation around #KasiMlungu may have started today but it shouldn't end today because it's no longer trending. South Africans need to understand that conversations that begin on social media needn't end there and that we need to start having these conversations over a longer period of words. And for those of us getting FOMO at the mere thought of not being able to speak your truth and respond to that of others on social media, go ahead and get rid of your FOMO—but remember that it's okay for the conversation to move offline too. In fact, in a country like ours, it's necessary.