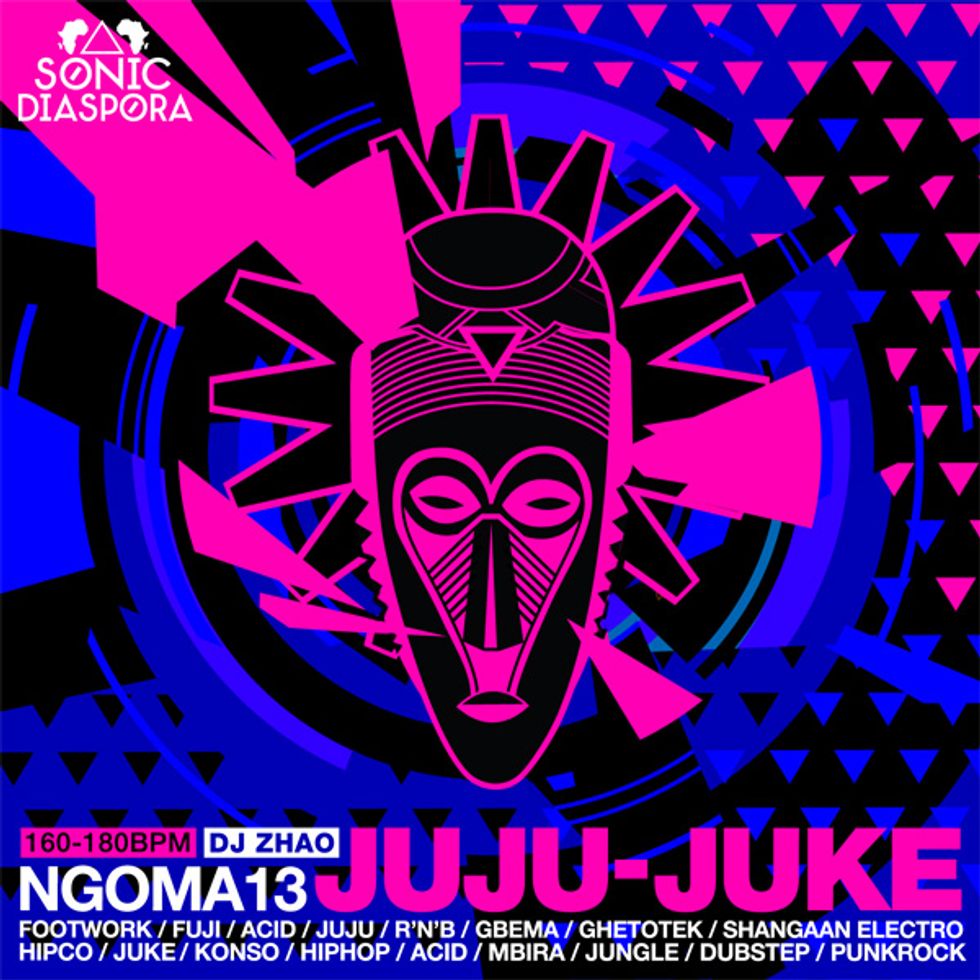 Berlin's DJ Zhao — the man behind the previously featured Punk In Africa and Ngoma 9 Arabic mixtape — delivers another extensive and excellent mix. In Nogma 13 Juju-Juke, Zhao finds a link between Chicago's juke/footwork and traditional African rhythms. He describes the history behind the mix best:

Ever since drums were banned on most of the North Amerian slave plantations during the 1600s, because the masters had discovered that the (mostly) West African slaves were organizing revolts with their talking drums, the expression of poly-rhythms in Afro-North-American music has primarily been through use of the voice.  This is the reason Afro-Diasporic music in North-America is typified by the simple 1-2 "dupple" rhythm, and by contrast South-American or Caribbean styles are marked by more complex drum patterns.  Thus the evolution of all subsequent North-American music was profoundly shaped, from Blues to Funk to Disco:  kick on the 1, and snare on the 2; all the way down to the late 20th Century - complex poly-rhythms in hiphop is produced with rap, and the drums remain a skeletal, minimalistic boom-bap, as if just to mark time.

Now in the 21st Century a renewed sense of complex poly-rhythm returns to  Afro-North-American dance music in the form of Juke/Footwork in Chicago: interlocking 2s and 3s form intricatebeat structures, unmistakeably related to many forms of percussion styles in the motherland (but of course often with that N. American hard snare on the 2)

Juju-Juke demonstrates this epic reconnection, after centuries of separation, between African tradition and Afro-Diaspora:  between Juju/Fuji andJuke/Footwork, between Ethiopian dance styles and Ghetto-Tech, between Iberian trad-modern street sounds and R'n'B/Pop, between Afro-Punk and Club Music, between Congolese Mbira workouts and Hiphop, between Ghanaian and Senegalese percussion and Urban Bass Pressure.

Stream the mix in its entirety below. Head to DJ Zhao's blog to download the mix in both single/separate track form and, if possible, make a donation for the project.