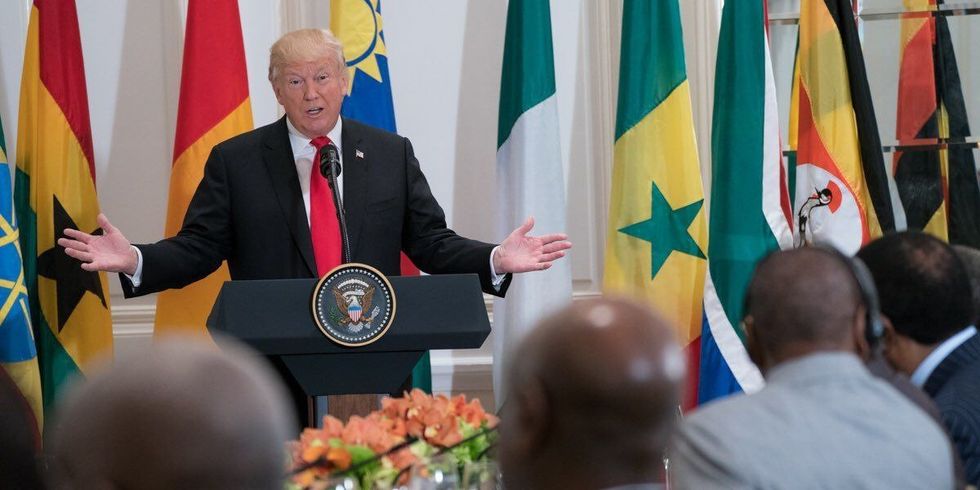 Donald Trump referred to Haiti and various African nations as "shithole countries" while discussing immigration reform in a White House meeting on Thrusday.

Donald Trump was being his usual "ain't shit" self on Thursday during a meeting in the oval office in which lawmakers suggested extending immigration protections for people from El Salvador, Haiti and various African nations as a bipartisan initiative.

According to a report fromThe Washington Post, not only did 45 completely balk at the idea—no real surprise there—he also proceeded to refer to Haiti and African nations as "shithole" countries. That's correct, even with all the covertly demeaning terms that white men have created to refer to non-Western nations, like "third world" or "underdeveloped," the president chose to go with "shithole."

Speaking on the matter, Trump had this to say:

"Why are we having all these people from shithole countries come here?"

He later suggested that the United States focus on bringing people from countries like Norway—because, you know, Norway isn't a predominately black country and that's really all that matters here.

We already knew Trump was incapable of showing any semblance of human decency, but it's still exasperating every time he decides to shamelessly parade his ignorance—which, at this point, is an everyday occurrence.

Folks have been reacting to his remarks on Twitter:

@kylegriffin1 Let’s cut to the chase. What’s the difference between immigrants from Haiti and African nations and… https://t.co/nCIQmTQZk3
— SpinDoctor (@SpinDoctor) 1515708726.0

How many times do we have to show people that Donald Trump is racist. He called predominantly black countries “shit… https://t.co/WMRDjba0a6
— Luke Waltham (@Luke Waltham) 1515708204.0