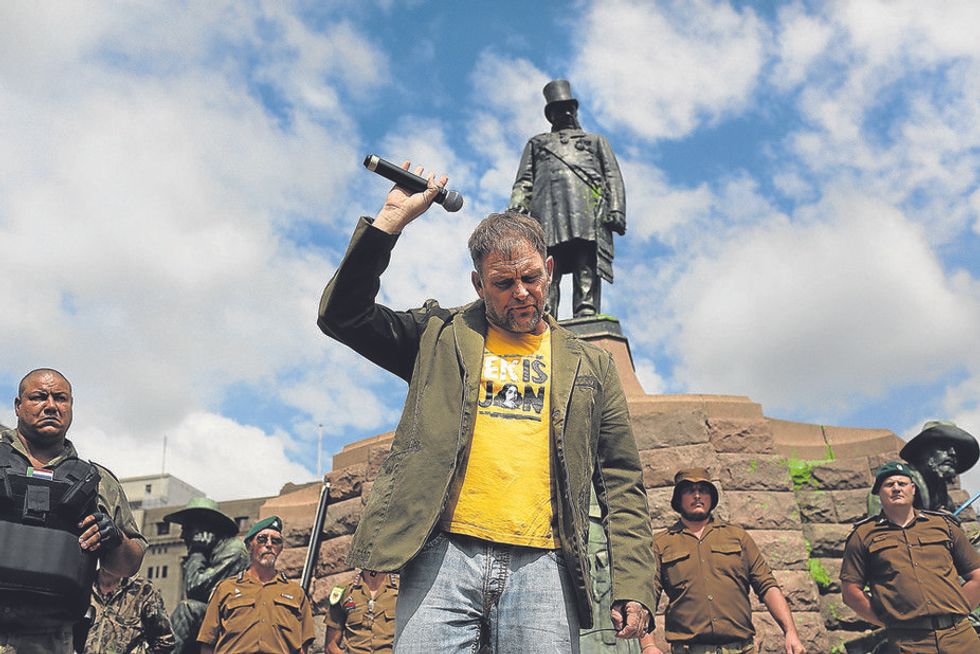 In the age of smartphones and social media, the spread of ideas as digital memes is global and unpredictable. This includes, for example, Islamic State (IS) recruiting followers from across the globe, to the nationalist and xenophobic ideas that were espoused respectively in the campaigns by Brexiteers to get the UK to leave the European Union and Donald Trump to get elected as US president.

Around the world, the right especially has shown how effective a tool social media can be.

A good example is popular South African singer Steve Hofmeyr, who is a foremost crusader for white right-wing causes, –especially on social media. With 222,000 followers, his Twitter timeline not only features local issues of so-called white victimhood, but also retweets of prominent European extremists’ campaigns. As to be expected, he is a strong Trump supporter.

Recently, there was a fundraising campaign to send Hofmeyr to the US to meet with Trump. The extremist campaigner behind the proposed “talks” said it was aimed at stopping the “genocide” of white Afrikaners. He even sent tweets to Trump’s daughter, Ivanka, and his wife, Melania, to help facilitate the talks.

But South Africa’s right-wing is a fractious bunch, and the fundraising campaign stuttered to a halt when it appeared that it was a scam and Hofmeyr distanced himself from the efforts.

White victimhood has crossed international borders. The idea of white people falling victim to an “onslaught” of refugees and immigrants has become a major factor in elections across Europe. The meaning of “PC” is changing, with political correctness making way for patriotic correctness. That’s what Trump’s “America First” is all about.

Trump’s campaign slogan “Make America Great Again” appealed to white victimhood. He focused on a white electorate who feels disillusioned by demographic and sociopolitical change in the US. They feel that American values are in danger, and hence there is the need to “take back America”.

White victimhood is a right-wing tactic that inverts the left’s narratives of minority discrimination and neocolonialism. This tactic denies that there is such a thing as white privilege, and attempts to camouflage white domination.

Whites can surely be victims of crime or discrimination as individuals, but white victimhood goes much further. It implies that whites as a demographic group are victims of discrimination, oppression or even persecution. In short, whites are endangered by all sorts of dangers out there in the world.

This recent right-wing tactic has morphed into the “alt-right” movement in America with various faces. The extreme is the new Nazism dressed in designer suits and championed by American white supremacist Richard Spencer, who is president of the National Policy Institute.

There is the more “gentrified” culture of anti-left trolling with the Brit Milo Yiannopoulos as its flamboyant poster boy. This right-wing provocateur was forced this week to fall on his sword over remarks in which he appeared to endorse sex between “younger boys” and older men.

And there is Trump’s powerful chief strategist, Stephen Bannon, with his siege mentality against “Islamic fascism”.

The “alt-right” news website Breitbart has an editor-at-large (after Bannon’s departure) with strong South African ties. Joel Pollak, born in South Africa, was a speechwriter for the opposition Democratic Alliance leader Tony Leon from 2002 to 2006 whilst studying in the country.

Pollak is now being floated as Trump’s possible US ambassador in Pretoria.

This South African connection goes deeper. The persecution of whites is an influential idea for the South African far-right. The fear of black violence, the so-called “Swart Gevaar” (Afrikaans for black danger) propagated by the apartheid state, still persists. The most extreme version of this victimhood is “white genocide”.

This idea has been popularised by the Afrikaans pop singers Hofmeyr and Sunette Bridges through their Red October campaign. They advocate that farm murders in South Africa come down to “white genocide” – farm murders most certainly are problematic, even without it being hijacked for political mileage. But they don’t amount to “white genocide” and affects more than white people.

The right-wing political party Freedom Front Plus has called on the UN to investigate white genocide. The numbers show that this idea is sheer hyperbole.

An online petition has also requested the Council of the EU to “allow all white South Africans the right to return to Europe”. The petition says that whites face persecution and ethnic cleansing at home.

The petition has been reinvigorated by Trump’s election as US president and calls him “a new hope for white South Africans”. It now addresses Trump to accept whites from South Africa as refugees to the US.

The idea of white genocide (or annihilation) has spread to the rest of the globe. Views from the South African far-right found its way into two well-known acts of terrorism committed by radicalised white men.

The first was the 2011 mass murder of 77 people (mostly minors) by Anders Breivik on an island near Oslo in Norway. Breivik’s manifesto “2083 – A European Declaration of Independence” is a reference to his predicted date when Europe becomes a Muslim continent. It includes various references to the persecution of whites in South Africa and a whole section on Afrikaner genocide.

Lise Aaserud/ScanpixThe second was the 2015 mass shooting of nine black people by Dylann Roof in a church in Charleston, South Carolina. Roof’s manifesto “The Last Rhodesian” included a reference to discrimination against whites in South Africa. He also lauds the “success” of apartheid as proof that a black majority can be controlled by a white minority.

Breivik and Roof both raised the fear of persecution of whites as motivation for their actions. They invoked the South African situation as “proof” that whites are in danger due to an onslaught by Muslims (in Europe) and black people (in the US).

Trump’s mention of “American carnage” in his inaugural address is a continuation of the narrative of white victimhood. It forms the imaginary basis for something similar to the apartheid state’s “Swart Gevaar” – except with Mexicans and Muslims being the “peril”.

Trump’s way to deal with these hyperbolic dangers is the proposed wall between the US and Mexico, and the Muslim travel ban targeting majority-Muslim countries.

The idea of white victimhood played an important part in Trump’s rise. The South African brand of white supremacy has made a tangible contribution to this narrative of victimhood. It is part of a growing “white supremacist cosmopolitanism” and a Trump New World Order.