This Is All Your Fault: To Defeat Donald Trump We Need Shared Goals 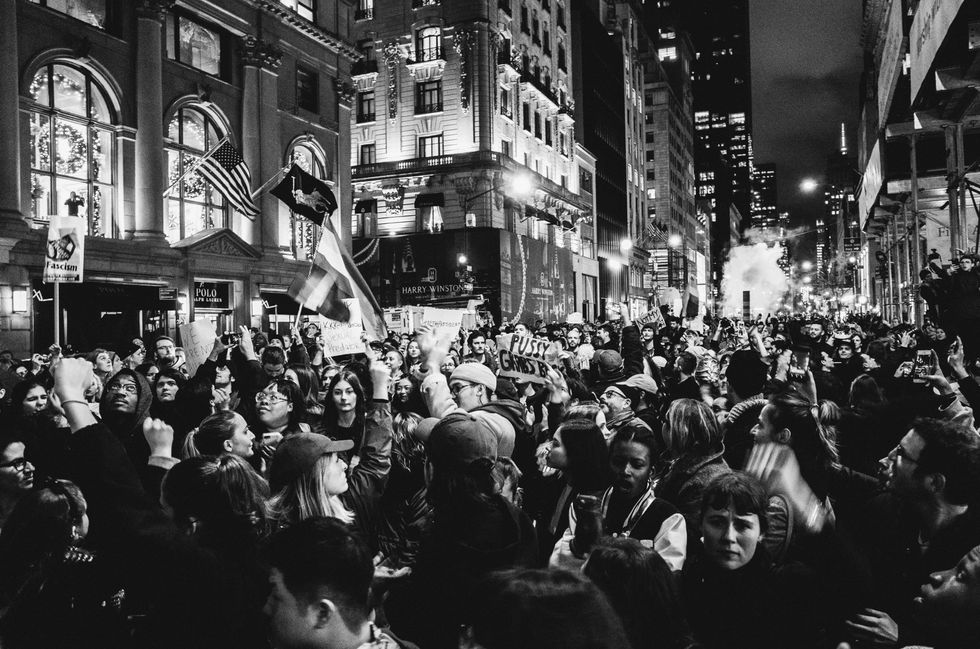 Voters' toxic self interest brought us the Trump presidency. Only working toward shared goals can get us out of it.

I’ve been sitting in “safe spaces” lately listening to others absorb the collective trauma from a Donald Trump victory. Many people are either in a state of shock or are viewing whiteness with the sort of suspicion a female victim of sexual assault might apply to all men. No doubt, those views are real and legitimate.

Frankly, I don’t believe people would be in mourning if Hillary Clinton won the election and that’s a problem. Maybe that’s unfair on my part but hear me out. Many on the “left” had no problem accepting the violent drone strike program of the Obama administration. Others were willing to accept the catastrophic ways in which neoliberalism swept across the Rust Belt, decimating communities.

Still others did not think police shootings of unarmed African Americans were a big deal. If this is your first time really coming to grips with the fact that racism permeates American society, then there is a problem.

At least Trump supporters do not hide their selfishness.

It’s hypocritical for people to deride Trump voters for putting their own self-interests above those of their fellow Americans, when many on the “left” did the same with their uncritical support for policies under the Obama administration and Clinton campaigns that disenfranchised all working-class Americans. Under Obama, a critical mass on the left was largely invested in empire and the neoliberal onslaught, having no problem with its expression; except when it backfired on Nov. 8th.

The surprise at the result of the election is wrapped up in obvious contradictions: people who in many ways capitulated to white supremacy were suddenly upset by it. That sadness was not expressed when structural and systemic violence was doled out on an industrial scale to people who are faceless in our collective consciousness. Americans have to reckon with the kind of society we want to envision. At least Trump supporters do not hide their selfishness.

Hillary Clinton’s record and deeds gave a reasonable indication that she would continue policies that harm working class people of all racial and ethnic backgrounds along with people in the developing world. This alone would prompt anyone from an economically de-industrialized area to be very skeptical of her claims, or simply vote against her. It is not a coincidence that voter turnout in Michigan and everywhere else among African Americans, was significantly lower compared to the two previous elections.

Trump strategically married the longstanding insecurities of white voters about the loss of cultural hegemony with their legitimate economic concerns. Meanwhile, the establishment left courted money and support from the same financial institutions that wrecked the economy in 2008. This election represented the ultimate triumph of self-interest over the common good.

One cannot be complicit in the degradation of their fellow human beings and expect society to remain intact.

One cannot be complicit in the degradation of their fellow human beings and expect society to remain intact. If people accept the pursuit of wealth and personal gratification at the expense of everything else then the entire society will crumble. The most oppressed and vulnerable groups of people will likely be devoured by the most entitled and emboldened groups. Yet all that will remain is mutually assured destruction. If American society turns inwardly toward destruction, then it is likely that such destructive tendencies will manifest in a foreign policy that promises spectacular human suffering all over the world.

We have to face the reality that American power is not sustainable, and even more so, is not desirable. American prosperity is based on individual consumption and competition for limited resources, and as this election shows, this mind state only results in breakdown and eventual conflict. The very value which we give our lives has to be reevaluated in light of principles not linked to acquiring and consuming for the sake of internal validation.