DOOKOOM: A Perverted Vision of the Rainbow Nation 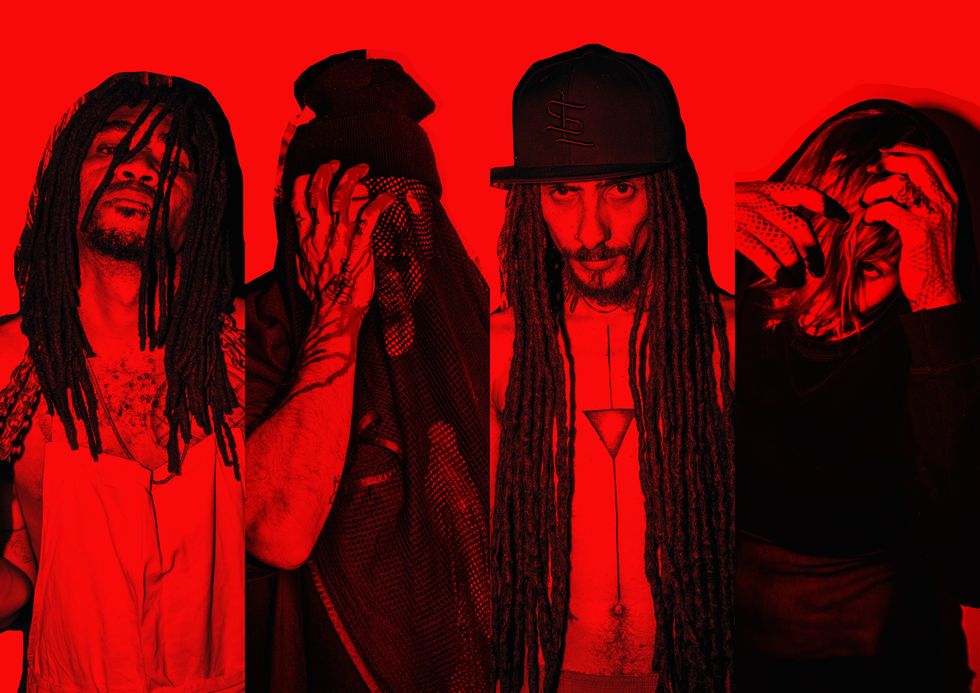 Cape Town noise rap group DOOKOOM on their new album, touring Europe and what it means to be punk in South Africa.

DOOKOOM have been described as “noise rap,” “afropunk,” “industrial hip hop,” “grimy trap-hop” and, perhaps the best of them all, “the most vile, common, gangsta shit.” They describe themselves as a “perverted vision of the rainbow nation” and an angry force of defiance against a corrupt society, although they never shy away from exposing their own human failings of lust, violence, addiction and self-hatred.

Steeped in controversy, it’s difficult to place the Cape Town-based group on the cultural playing field. On one hand they've been accused of violent racism against whites, whilst on the other they’ve been labelled a “white band,” an object of exploitation by behind-the-scenes forces.

Their latest album, NO!, is a defiant attempt to reclaim their own artistic vision and credibility. In order to understand it we have to look at it through a lens of brutal honesty, as well as irony. In a punk-like holding-up-of-the-mirror to society, DOOKOOM are all of the things that others have attempted to label them as, but more importantly than that, they are wholly themselves; a product of a world dominated by white supremacy, and a voice against it. Their mere existence, and the polarised critical conversation around them, highlights the incredible difficulties of navigating the artistic world as a person of colour.

I caught up with the group’s unrestrictable bandleader and MC, Isaac Mutant, and producer-in-chief, Damian “Dplanet” Stephens, to chat about their recent European tour, the new album, and whether they care about what other people seem to think about them.

The following interview has been edited for length and clarity.

This album feels less overtly controversial than previous releases. It has a good balance between the personal, the political and the social. As far as the controversy goes though, do you welcome it? Or does it distract from the music?

Isaac Mutant: It’s always a good thing for an artist to have controversy, but that’s not what we are aiming at. We’re not pushing it away either. I think we try to work towards being human, in general. Like, some issues are controversial for some people and other issues are more controversial for other people. So, each to his own. And we don’t give a fuck.

Do you feel that the reception and outrage from various groups of people, especially after the farm-protest-themed video, affects the way you write new music? Do you feel that you have to tone it down sometimes?

Isaac: You know, I thought it was just me and my brasse that had a problem with this kind of thing, but I think it’s a human thing. We came to that conclusion. Jesus it’s not just us, not even just South Africa, it’s a universal thing.

But does it affect the way you guys write music going forward?

Dplanet: I mean, obviously we wanna make money as well, so we do try and think about that occasionally, but that’s always an afterthought. We always just pour out our shit into the music. Piers Morgan just said some shit about how Muhammad Ali was actually racist because he said that whole shit about ‘white devils’ when he joined the Nation of Islam. And it’s like, “how is that controversial when you look at the history of white people?” How is it controversial for a black person to say that? So I mean controversy is, like, in the eyes of the beholder.

Isaac: If somebody can benefit off it, then it’s controversial.

Dplanet: But I mean the only so-called controversial thing we’ve done is “Larney Jou Poes.” And we lost money doing that. We lost sponsorship deals. We got blackballed by most of South Africa. So being controversial is not a marketing ploy like many people think it is, not for us.

What has the reception been like for you guys in Europe? Does it bother you that perhaps some European audiences won’t ever be able to relate to the messages at the heart of the music?

Isaac: We actually evolved on tour. I was kind of nervous. “How the fuck do I do this now - in front of these people who don’t speak Afrikaans?” I kept saying this, but these people are so fucking open for something exciting. They’re really open-minded, and they don’t give a fuck, bra. South Africa is a bit too cynical for me. Everything is fucking political. Even the word k****r is political. Which it’s not, but anyway, Europe is dope man. All the money. That’s why Europe is dope. Number one: money is always good.

You guys don’t do a lot of touring here in SA. I don’t think you guys have been to Durban yet. Is it easier for you guys to play in Europe where the focus can be more on the qualities of the music and less on the politics of the lyrics?

Dplanet: I don’t know if it’s got anything to do with politics. To be honest, I just think South Africans have been kept away from a lot of shit musically, culturally, everything, so people are still very locked into a certain way of thinking. Europeans don’t seem to give a fuck about anything. You see a girl who goes to a Drake show––and she’s crying in the front row––who will also come and stage dive and be in a mosh pit. Whereas here people are like, “I like this so I’m not going to go to a Dookoom show because I don’t want to get my nose broken or shot or something.”

Isaac: People are very scared in South Africa as well. Everything scares people because of the fucking situation that South Africa is facing right now. I think people feel comfortable with whatever they feel comfortable with. And Dookoom is a fucking experience, bra. I think people are a bit scared for what they don’t know cos we look a bit fucking new and fucking bunch of whities and a bunch of coloureds who can actually jam together.

Dplanet: I just have to say for the record no one has actually been shot at our shows.

Was that an actual rumour? Was that a thing?

Dplanet: It was one of those things that you hear––that people have been shot and stabbings and shit. And animals got slaughtered.

Isaac: No animals were slaughtered.

Do you enjoy playing in SA? Why or why not?

Dplanet: Of course we do. I enjoy playing everywhere. Performing is like the apex of every shit we are trying to do. Even though I listen to the whole album, it’s not an album you take home and listen to unless there’s something wrong with you. Our shit is our show. That’s the experience of Dookoom. The album captures a small part of that, you know?

In a press release you say the title NO! is "a symbol of defiance," and also of the Number down in the Cape. For me, the word ‘NO’ also denotes the refusal to give consent. It feels like on this album you guys are trying to perhaps reclaim a sense of self and your agency. To refuse to be seen as either a white band, which I believe you guys were called or as this or that, but rather as your own artists, and not some appropriation, for example.

Dplanet: I guess this is like a general ‘fuck you’ to everything. It’s just a ‘no.’ Everyone else says yes to everything. "Do you want to do this?" "Are you happy?" I’m talking about on a micro level of, like, anything. But up towards the more political level of, "Do you accept being governed at all?"

Isaac: Like a kid stamping their feet. Like "No! No! Capital N! Capital O!" Exclamation mark. Like a visual that I have in my mind when I see the word ‘no.’ It’s anti-establishment. It’s anti everything that yes men said yes to.

Dplanet: Like, everything. I watched the SAMAs. I just thought that all these people are just chasing something. They are chasing money obviously. They are definitely not chasing power. I just watched the whole thing and all I could think of in my mind constantly was just ‘No.’ Who would accept this shit? I mean, yeah, making money is important, definitely. We are not trying to say that we are just artists and want to be broke. Like, who is making music that says anything? I don’t want to sound old school because we are actually not old school at all. We are actually more futuristic than all these motherfuckers. But that’s the point. It’s not about being like some kind of conscious 90s hip-hop bullshit. It’s actually about moving further forward than where we are now. We are as nihilistic as every other motherfucker who wants to turn up and get lit and drink lean––and probably even more so than all those people, but you have to find some kind of balance between that and actually standing for something.

Isaac: I am struggling with these fucking idiots. Especially the way the world works right now. Everything is fake. Everything that we focus on is fake. Everything we listen to is fake. SAMAs is fake as fuck with a capital ‘F’. So ja, we just not cool with the system. With the abuse, with the whole setup. I think that is what the capital N, capital O stands for basically.

Isaac, I read in an earlier interview that you were quite heavily influenced by the punk scene, and I guess you could say that a lot of what Dookoom does is quite punk, such as the whole holding up of a mirror to society, and the embracing of the darker sides of your humanity.

Isaac: You touched it right on the button, bra. The punk world is very anti-establishment. Mid 80s I wasn’t that clued up about it. But, it’s anti-establishment because I want to not do something because some person wants me to. You need to conform if you want to work in a safe environment. Pierce my face! That’s why skateboarding is punk as shit right now. They don’t give a shit. Anti-establishment. It used to be what hip-hop stood for. Not anymore because everyone is a bunch of poeses except me and my people. So that’s why I wear these chains all the time. It’s anti-establishment. And that comes from the punk movement. It’s the punk mentality. I don’t give a fuck. I sleep when I want to. I sniff what I want to. I puff what I want to, when I want to. That’s a punk mentality. Anti-establishment. That mohawk thing is anti-establishment. That’s punk and it influenced a lot of what I think right now. It’s kind of the equivalent of freedom for me right now. I may just be wrong and I might be on the wrong path, but it feels like freedom right now. It’s almost like the title of our album. I don’t agree with so and so’s label of clothing or whatever, so I make my fucking own clothes. Whatever. It’s also a way of life and the way I see things. So it influences a lot of my music as well, especially the way I write! I don’t write 16-bar format, ‘cause I think in a different way right now. I think in a different way. I move differently. I think differently. I am different. I wouldn’t say punk rock though. I would say punk. ‘Cause punk rock is another genre of music. I don’t know what we do. But it’s punk-something.

NO! is out now on IOT Records. Stream an album teaser below.