Ebola: A Wake Up Call To Sierra Leone's Upper Class – By Sheka Forna 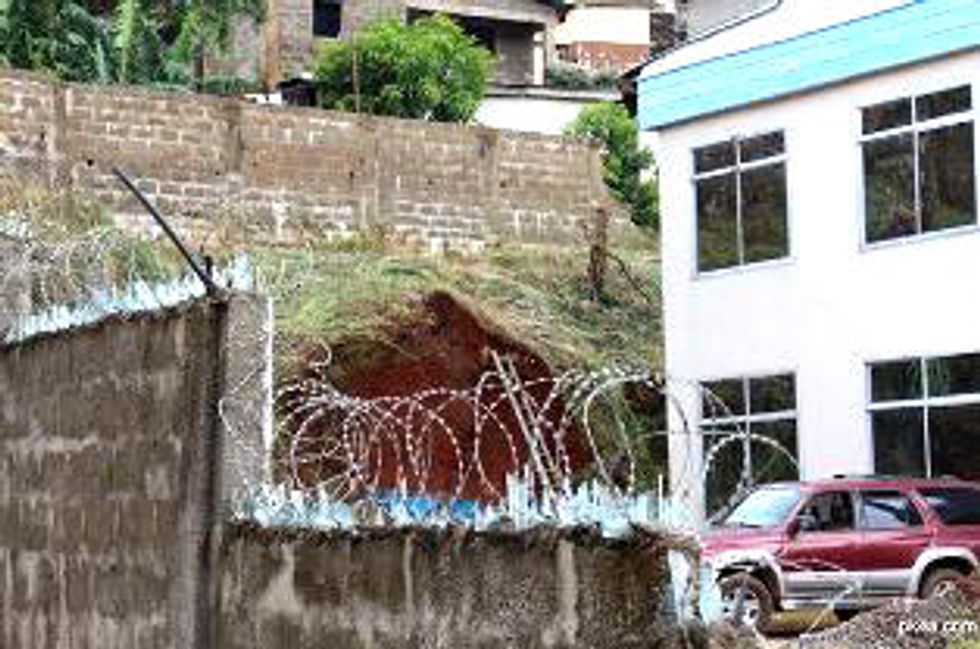 In an op-ed for Okayafrica, Sheka Forna discusses Ebola as a wake up call to Sierra Leone's upper class.

The Country Lodge, pictured above, is one the priciest hotels in Sierra Leone. Up above the city in a secluded location, it is a respite for the wealthy.

I recently returned to my hometown of Freetown, Sierra Leone, after 6 weeks in Europe, and found myself surprisingly relieved by the state of the country. Belying some of the more hysterical voices in the Western media, as well as the more radical elements on Facebook, people are - by and large - getting on with their lives. The streets are filled with hawkers and petty traders; I awake to the calls of water vendors and the voices of neighbor greeting neighbor; joggers continue to ply the beach road, and the local youth are passionately engaged in a noisy 5-a-side soccer competition. Absent from our day-to-day existence are the dead and the dying so graphically pictured in foreign news stories, absent is a sense of fear, and absent too is any breakdown in society or the rule of law. That is not to say that things are normal – we are a nation under siege; Ebola is still very real, people are dying, communities blighted, and radical steps have to be taken to halt its spread. The number of dead will rise, but there appears to be a growing faith that we're moving in the right direction and a populace confident that this plague will be beaten.

I was taken aback to learn that a recent comment I'd posted on Facebook may have offended the Government of Sierra Leone. I generally try to be objective, if a little cynical, in my observations. They may have been referring to my ridiculing a statement by Alpha Khan, our Minister of Information and Communication, that Sierra Leone had sufficient ambulances for its populace prior to the Ebola outbreak. Mr. Khan claimed that each of Sierra Leone’s 14 districts had at least one ambulance, with some having "as many as three." Allowing for the more generous figure, Sierra Leone therefore had "as many as" 42 ambulances serving a population of 6.1 million. Few other governments would hail this figure as satisfactory. So when a woman from my paternal village suffering complications in childbirth had to be transported to a hospital by 'Okada' – the ubiquitous motorcycle taxis that provide the backbone of Sierra Leone’s public transport system – I hope my frustration can be understood.

This minor Facebook tiff got me thinking about Sierra Leone’s upper classes – the doctors, dentists, bankers, accountants, business men and women – and their general complacency. We who have the privilege of relative wealth and education, most often abroad, and who have returned to Sierra Leone to enjoy the benefits that such privilege brings. Servants, chauffer-driven cars, beach houses, holidays abroad, and a seemingly endless succession of fashion shows, parties, dinners and cocktails – we have lived an entirely different life, far more privileged, far safer and certainly more decadent, to that of the majority of Sierra Leoneans. Until now we in these upper classes have generally been unwilling – or uninterested – in engaging in civil matters and publically voicing our opinions on those things essential to developing our country which, by the way, still ranks 5th from the bottom on the UN’s Human Development Index.

We have turned a blind eye to the poverty and lack of development that surrounds us. From my balcony I look out over a tin shack, barely 100 square feet, occupied by three generations and 10 individuals from one family. Boiling hot in the dry season, dripping wet in the rains. At the end of my street a stand-pipe delivers water intermittently to children, some as young as five, who queue daily bearing 5-gallon jerry cans and any other container with which to supply the washing and cooking needs of entire families. The road outside my house is riddled with potholes and bordered by open gutters, choked with rubbish. Dusk pitches 70 percent of the city into darkness. As Sierra Leone’s infrastructure has crumbled, the upper classes have hidden behind ever higher walls, bigger SUVs, and more powerful generators, grumbling but unwilling to engage – to all intents and purposes acting as if the Sierra Leone outside our walls was another country from the ‘Sweet Salone’ that we've inhabited.

I wasn't here during the war years, but see echoes of the same complacency that saw my parents waking up to rebels on their doorstep. I recall speaking to my stepmother by telephone from London in 1995, concerned by a BBC report that had placed the biggest rebel group, the Revolutionary United Front (RUF), less than 10 miles from our house in Freetown. She cheerfully told me not to worry, that she had only that morning been for a stroll on the beach and that all was well. History has proven how wrong she was. On that occasion the rebels were rebuffed. But in 1997 they returned with a vengeance, overrunning Freetown before embarking a wave of looting and revenge killings. My stepmother was evacuated to a US aircraft carrier with just one plastic bag of possessions. She was not to return to Freetown for three years.

The privileged in Sierra Leone have long chosen to abstain from tackling issues that impact on the lives of all Sierra Leoneans, preferring instead to seek remedies for our lot alone, leaving the rest of society to fare as best they can. How ironic that we now reflect on the inadequacies of our healthcare system when we, myself included, have not thought twice about having our babies born abroad? With one of the highest infant mortality rates in the world, why would one choose to give birth in Sierra Leone if other options are available? Similarly, we bemoan falling standards in education while pondering the logistics of schooling our kids in the UK or the US (guilty again!).

The truth is we need to engage and we need to do so on an ongoing basis, not just in the face of a crisis. I'm amazed at how few of my contemporaries participated in the last Presidential election. Too hot, too dirty, too smelly, too time consuming. I can understand why some chose not to, but I find it harder to understand our unwillingness to involve ourselves in other ways. Sierra Leone is not Eritrea or North Korea. We have a vibrant press, professional bodies, access to social media and a fairly benign ruling class. As the son of a casualty of our past political processes – my father was executed by a previous regime, but that is another story – I'm mortified that some now look back to that period as the "good old days." Although political opponents are no longer imprisoned, let alone killed, I can understand that, for some, the memories of pipe-borne water, continuous power, decent roads, functioning hospitals, good schools and the absence of squatters, beggars and litter holds a powerful pull. However, the rot, now obscured by rose-tinted spectacles, had set in - paving the way for the eleven year civil war that came, and our country’s present day travails.

Be under no illusion, decisions are being made every day that impact on our lives. We have the opportunity to be a part of that process. We can blame our government for much, but we cannot blame it for everything, and not at all if we opt out of the debate. Engagement need not be confrontational. It can be constructive, informed and offer solutions. There is a saying in Krio, the lingua franca of a country boasting 16 local dialects, “wan finger no dae pik stone.” To pick up a pebble requires the use of several fingers, not just one. A country is only as good as its institutions. The ongoing crisis has demonstrated how wanting some of these institutions have been, amongst them we the upper class.

That seems to be changing. It is a pity that it took a crisis such as this (and, more probably, the very specific ways it has effected us such as the closing of schools and bars, and the suspension of international flights), but we seem to finally have started to find our voices. The radio, newspapers and Internet are full of the frustrations of a people who have been galvanized by the unfolding Ebola tragedies. Organizations are springing up to complement the government's efforts in the war against Ebola, dissident views are being espoused in forums by people avowedly non-political, professionals are beginning to question the failings of the institutions representing them. But more can be done: we can participate in community meetings and work with our local governance structures; we can use our professional bodies to proffer solutions to some of the problems we face; we can join the boards of our schools and hospitals; we can be candid with foreign dignitaries; we can petition; we can lead. We have the ability to create a better Sierra Leone. But to get there we must do all of this, and more. Ebola has been a wake up call. I hope that the small steps that have been taken will continue and develop long after we've kicked Ebola out of Sierra Leone.

Sheka Forna is the son of Mohamed Forna, a doctor and leading Sierra Leonean dissident executed in 1975. Born and educated in the UK, Sheka returned to Sierra Leone in 2008 to establish Splash Mobile Money, the country’s first mobile payment provider. He is married with three children. The ongoing Ebola crisis has forced his family to take up temporary residence in Denmark.