On The Ground In Sierra Leone, Part 2: Notes From The Ebola Lockdown 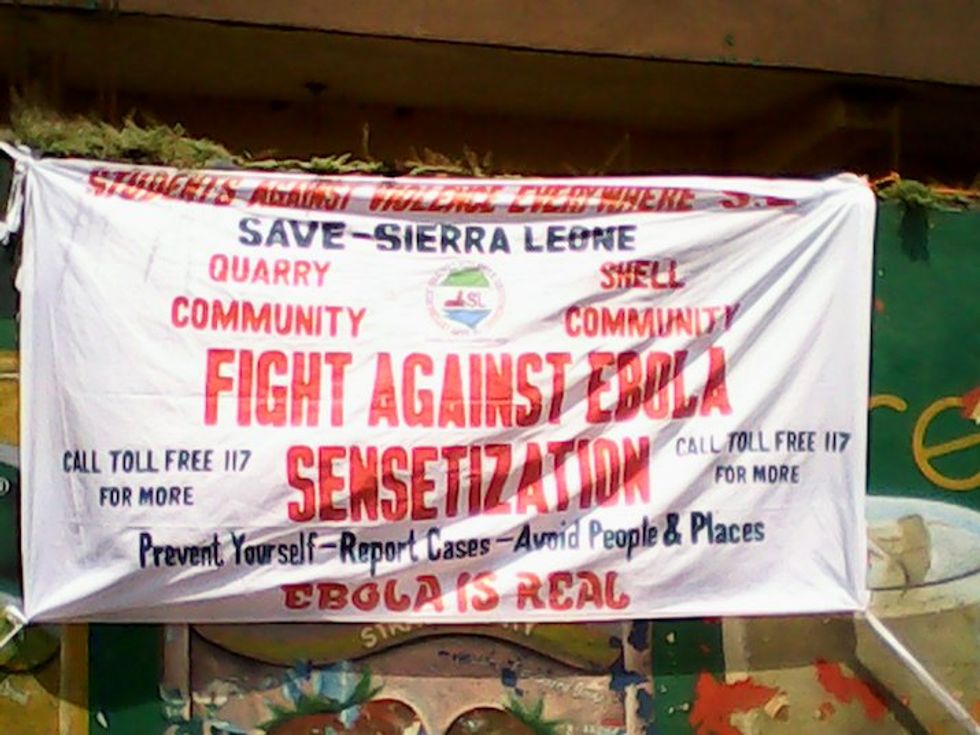 Freetown reporter John A L Terry gave his impressions on the ground as Sierra Leone prepared for the Ebola lockdown.

Just a few weeks ago the World Health Organizationreported that that the Ebola epidemic was accelerating, and 20,000 cases may be expected before the crisis could be brought under control. Other experts have predicted more dire numbers. In the wake of these predictions (indeed, at least 700 more cases of Ebola have been reported in West Africa in the last week), the Sierra Leone government has begun a three-day national lockdown in which the country’s population of six million will be confined to their homes in an attempt to contain the outbreak. The extreme and controversial campaign, "Ose to Ose Ebola Tok" (translated from Krio as "house-to-house Ebola talk"), will send community organizers and civil society leaders into every home in Sierra Leone ostensibly to educate people on preventing transmission, and, according to the health ministry, to help health workers track down people suffering from the illness. MSF has warned that such a lockdown could adversely effect containment by driving potential cases underground and jeopardizing trust between citizens and health workers.

On the eve of the lockdown, Sierra Leonean reporter John A L Terry gave his impressions of how his fellow citizens were preparing for this unprecedented action.

It’s Thursday afternoon and it has been raining since morning, but not even a hailstorm would stop Sierra Leoneans from purchasing necessary supplies on the eve of a three-day lockdown in the fight against Ebola. The government announced this lockdown some days ago and plans have been underway to make it happen. During the next three days, health workers will visit households and have health pep talks with them, informing them of how to prevent transmission, and what they should do if someone presents symptoms. They will also check for possible signs of Ebola in the households.

In preparation, foodstuff has been stocked in quarantined areas around the country and other slum settlements in the capital of Freetown. There are unusually long queues at banks. Commercial motor bikes, which provide the fastest means of transportation, and most hazardous too, around Freetown’s congested central business district were previously ordered to operate only between 7am and 7pm daily, further challenging the preparations for the upcoming lockdown. This affected mobility greatly, especially for evening returnees who reside in non-motorable areas of town, forcing people to trek home by foot, under their yoke of tiredness.

Most offices and businesses have suspended recruitment for the time being, others are discouraging gathering of any sort. The academic year has already been affected– schools are closed for now. One must wash one's hands, mostly with chlorine, as many times as one wishes to cross the threshold of any building; whether it’s a shop, a bank, a hospital, a restaurant, an office, a court, a carpentry shop, a studio, or even a home.

While ordinary Sierra Leoneans live in the everyday fear of contracting the disease, diplomats, expats, and other experts have abandoned the country – those who could afford it took flight while they still could. By now most international carriers have suspended flights to Sierra Leone, having deep effects on the economy, livelihood of people, and the fight against Ebola. British Airways and Air France have both halted all of their flights in and out of the country; SN Brussels Airlines has only just restarted some flights in order to deliver medical supplies from the United Nations. Only Royal Air Maroc continues to run, whilst the others cease to fly another day.

There is hardly any sort of discussion these days in Sierra Leone that is not Ebola-related. Sierra Leoneans are generally a very religious people, and followers of every faith continue to solicit divine help in this fight; but “the peace that passeth all understanding is yet to comfortably dwell within and among them.” Neighborhoods, local businesses, youth groups, civil society organizations, professionals, multi-national companies, professional associations, religious organizations, non-governmental organizations, and even students are adding their efforts to this fight.

Asad Navid, president of the Sierra Leone Medical Students Association, spoke about what his group is doing to help: “As medical students we understand what this situation means, and we want to do all we can to help stop it. We made dash cards, and did fund raisers from shop to shop. Every student bought his own T-shirt. We applied to the ministry of health for funds, but we did not get it. So we chose to raise it on our own. People’s knowledge is limited, but their awareness is good. We want to cover as many communities as possible. We really love to do more, but lack of funding is a deterrent.”

There are moments of grace: kind gifts of foodstuffs and words of encouragement continue to reach quarantined areas. National financial contributions and international donor funds towards Ebola control continue to come in, but redemption from this pestilence isn't something money has succeeded to buy. Traditional beliefs continue to pose impediments in this fight. In a village in the southern province of Bo, a Muslim cleric died of the Ebola virus, and many did not know. His community did not only go to the extent of bathing the infected corpse, but used the water to bathe their children. It is believed that such a practice would transfer to the children the wisdom of the dead cleric. The whole village has been affected and quarantined.

Health workers continue to be the most-affected by the Ebola virus and they lose their lives in their effort to save lives. So more than 350 affected health workers have died to this disease. In some quarters, ordinary Sierra Leoneans regard them with caution as they stand the risk of being carriers and distributors of virus. Four high profile medical doctors in this fight have succumbed to the fatality of Ebola. The most recent, Doctor Olivet Buck, was in charge of Lumley Government Hospital in the Sierra Leonean capital, is believed to have been exposed due to the inadequacy of protective gears. Her death has directed much outrage at the government, as many believe they didn’t do enough to save her. Health workers from other parts of the country continue to raise issues of delay in the payment of their allowances.

The social media has been of so much solace to young people, especially in creating the necessary distraction. Whether information or a joke, Whatsapp groups always have something Ebola-related to discuss for the day. Joel Abdulai Kallon is the administrator for a group called Chosen Generation. He reported, “Ebola-related messages have intensified, and the awareness has been awe-inspiring…. As a group, our major contribution in this fight has been information dissemination. Members regularly update one another on number of new cases, new developments in the fight, trouble spots, and so on.”

Sierra Leoneans may not know exactly when this this madness would go away, but they wish it would go soon. For all our sakes, this war must be won.

On The Ground In Sierra Leone Pt. 1: Notes From The Ebola Crisis