This Classic Fabric Symbolizes Beauty And Resistance For Saharawi Women 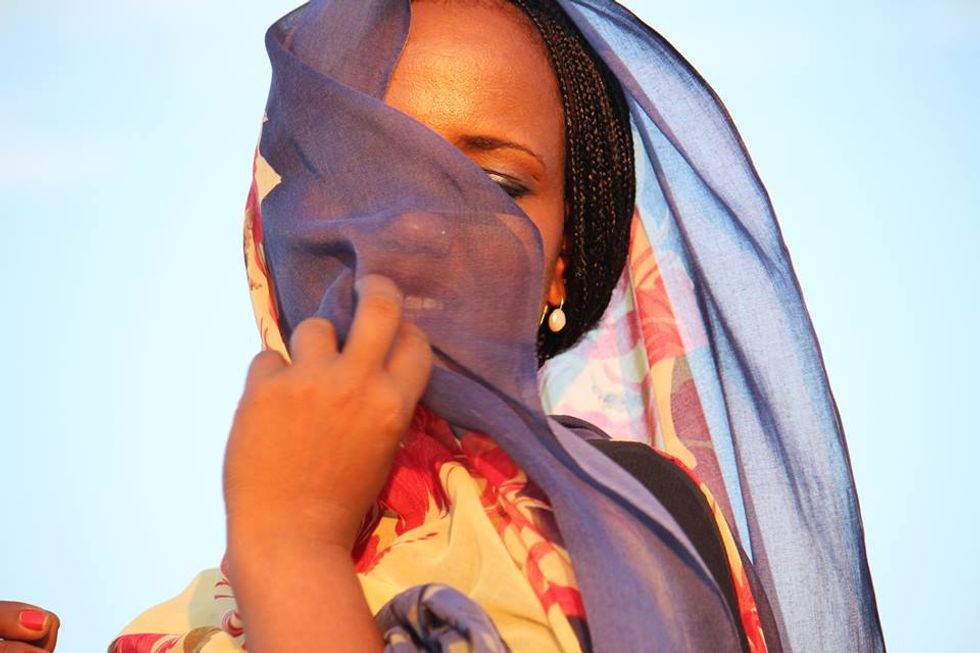 As a child of the Saharawi diaspora, I never fully understood the symbolism and meaning behind El-melhfa. As a teenager in Spain, I remember clearly the moment my mum handed me a colorful melhfa to wear. Walking outside was more than just difficult, it was embarrassing. I tripped and fell—making a complete mockery of myself in front of the neighbors. I handed the El-melhfa back to my mother fully intending never to wear it again.

My resentment changed when I had the experience of a lifetime and spoke at the United Nations. I wore El-melhfa to deliver a speech to hundreds of diplomats from all over the world, about the struggle that Saharawi people are enduring. The experience not only changed my outlook on wearing El-melhfa, but it also gave me a sense of pride.

El-melhfa is one of the strongest cultural weapons my people used against Spanish colonialism in the 19th century and continue to use against the Moroccan occupation today. It is what sets us apart, and is an important symbol of my Saharawi heritage and struggle. To understand the symbolism of El-melhfa, it is worth noting some facts surrounding its history.

A four-meter by one-meter piece of cloth, El-melhfa is a fabric that decorates Saharawi women and serves as a symbol of national identity and struggle against colonial oppression. It is considered by many as a mirror for strong, determined and revolutionary women who on daily bases combat the oppressive Moroccan regime to gain freedom and independence.

Many Saharawis still live under the repressive Moroccan regime in the occupied territories of our homeland. Women are picked up by security forces during peaceful demonstrations since they are visibly distinguished as Saharawis. They experience daily systematic discrimination for being proud and outspoken defenders of freedom for their homeland.

But, it is not only Saharawi women living in the occupied territories who use El-melhfa as a method of resistance. Saharawis living abroad are always proud to share that symbol. An example of this is human rights activist, Aminatou Haidar. She always wears her melhfa in her efforts to share the peaceful voice of her people around the globe.

Although one may view El-melhfa as a religious, Muslim symbol, it is specifically cultural and unique to the Saharawi people; used by every ethnic and religious groups within the population. It comes in variety of colors, patterns and materials. It may be designed simply, with artistic shapes and patterns, or even with the flag of Western Sahara. El-melhfa has different names depending on the colors and the material it is made of and sometimes, it gets its name from the age group of women wearing it.

El-melhfa holds a very practical role in the life of the Saharawi people. Western Sahara is mostly desert with dry and hot weather, characterized with sandstorms. El-melhfa can protect from the harsh environmental conditions of the desert.

Lemlahef, the plural word for El-melhfa in our language Hassaniya, usually comes in light colors such as white, light green and blue for young women, while dark colors such as black, brown and dark navy are for older women. The thickness of the material vary as well. Etalab, literally meaning youth, is a thin and more transparent fabric. Etalab is mostly worn by young girls when they first start wearing El-melhfa. El-galith, meaning thick, is for the elder women.

The most important and traditional type of Lemlahef, nilla, existed since the emergence of the Saharawi identity and culture. Nilla is made of a very thick material, and it releases a navy blue residue also called enilla. This residue is believed to be very good for the skin and helps against the sun radiation and sandstorms. The most traditional way of wearing El-melhfa is called etaglidee, where part of the nilla and part of a white melhfa are worn together. Women would wear the nilla on the upper body and the white piece, le-zaar, around the waist. Women usually wear etaglidee for special occasions and celebrations, but nowadays it is mostly worn for weddings. The bride would wear etaglidee on the first day of the festivities.

Despite the difficulty of wearing El-melhfas for those who are not used to it, this beautiful fabric and cultural creation is a great symbol of the Saharawi identity, and most importantly a testament to our people’s struggle for independence.