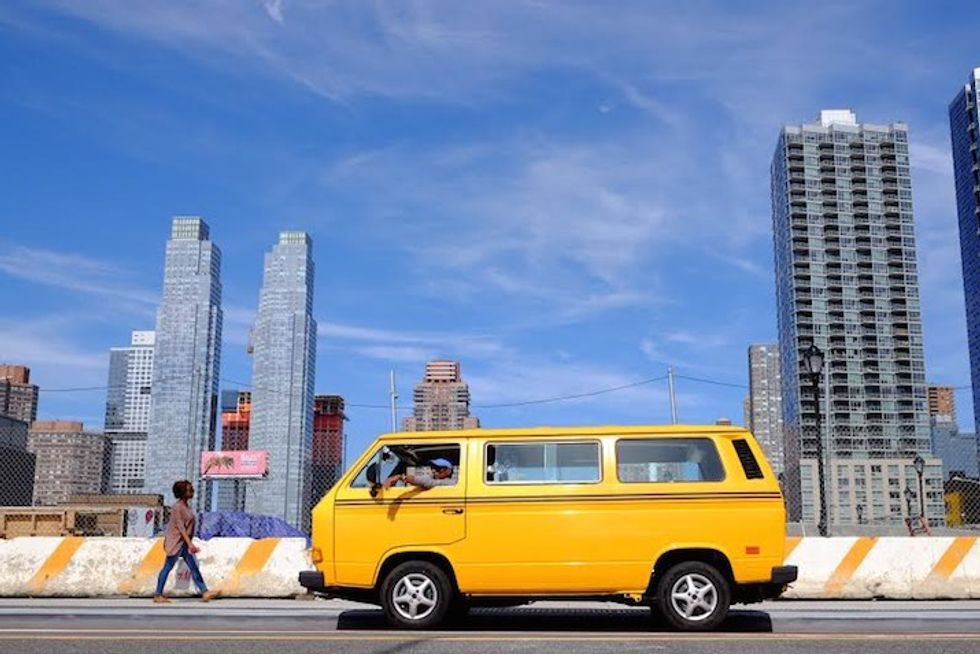 Nigerian sound artist Emeka Ogboh brings his Lagos Danfo bus to NYC for a special installment at "Meet The Africa Center" in Harlem.

Last month we profiled the work of Emeka Ogboh and his Lagos Soundscapes. The Nigerian sound artist is in New York this week and brought the vibrant, active sounds of a Lagos Danfo bus along for a one-day installation at the "Meet The Africa Center" event this Saturday in Harlem (where Okayafrica is also curating a stage). Comparable to NYC's iconic yellow taxi's, Danfo buses are emblematic to Lagos public transport. In his installation titled Lagos State of Mind II, Ogboh installs the intensity and diversity of sounds from Lagos in and around a Volkswagen Danfo bus. Accompanying the sounds on exhibit is a photographic tour of the bus driving through NYC's historic African-American neighborhoods and iconic landmarks such as the Apollo and the Empire State Building. Through audio-visual components, Ogboh will be taking visitors on a vivid, trans-national journey between Lagos and New York City. In an interview with Another Africa Ogboh explains:

"A lot of people would consider Lagos’ soundscape as being very noisy, and they’d call it noise. But I stopped calling it noise since I started listening to it... When I relocated the soundscapes to my studio, I started hearing and feeling them as compositions, something that could be musical. And when you feel the multilayer aspect of it, you start paying attention to individual elements in the soundscape like the bus conductor, the hawker, the vehicle noise or the sounds of the horns…you start breaking it down into different components, elements, and it looks like a symphony or orchestra. So it has a kind of musical connotation for me, it can feel like poetry and not a chaotic noise."

As an artist, Ogboh works primarily with sound and video, sharing his ability to interpret isolated noise into a multitude of metropolitan compositions. His past works include Verbal Maps of Ojuelegba, which features a Lagos Danfo bus driver calling out the Ojuelegba route, and The Ambivalence of 1960, an audio collage of early Nigerian politicians and their hopes for a decolonized Nigeria which was recently showcased at Casino Luxembourg. For a glimpse of what to expect Saturday check out Ogboh's Lagos State of Mind and pictures from his photographic tour of NYC below, or click here for more Lagos Soundscapes.

Join Okayafrica this Saturday, September 20th, at "Meet The Africa Center" in Harlem, featuring art by Emeka Ogboh and Beninese conceptual artist Meschac Gaba, dance by the Dance Theatre of Harlem, food trucks, and the Okayafrica Stage with live performances from Sierra Leone’s Janka Nabay and the Bubu Gang (with special guest Bajah from Bajah + The Dry Eye Crew) and Chop And Quench (The Fela! Band) plus DJ sets from Rich Medina, DJ Underdog, and DJ Birane (Côte d’Ivoire), and so much more. Find out more on the Africa Center here.