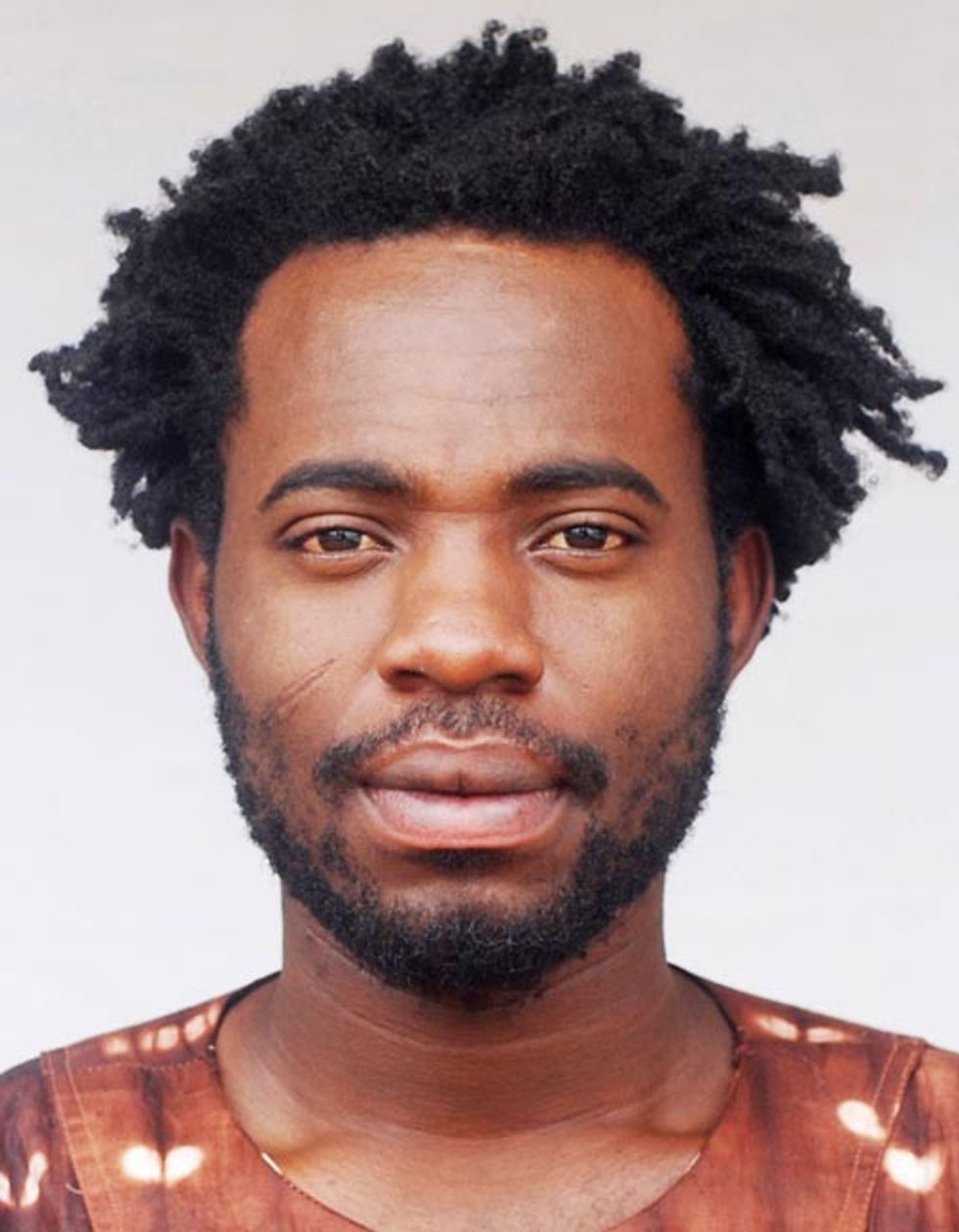 Cameroonian photographer Em’kal Eyongakpa was recently long-listed for the Aimia AGO Photography Prize. The Canadian-based award carries a substantial $50,000 prize and features an impressive international list of nominators and judges, including Bisi Silva, an independent curator and the founder/director of Centre for Contemporary Art, Lagos and Jennifer Blessing, Senior Curator of Photography at the Solomon R. Guggenheim Museum, New York, among others. The recognition comes during a busy time for him, with four shows under his belt already this year in Dubai, Paris, Germany and currently in Bougogne, France and more on the horizon. Perhaps surprisingly, he’s entirely self-taught as a photographer, a profession he only pursued in earnest after earning a Master’s in plant biology. The following are excerpts from an interview with Em'kal.

Em'kal discusses his art as the sum of a number of influences in his early life.

"I was born to Christian parents and lived in my village around my grandparents for the first few years of my life. My grandfathers (maternal and paternal) were herbalists/Shammans and my paternal grandmother was of Baha’i faith.

Later on I enjoyed multiple voyages from rural to urban milieu, oral Education to western style academic schemes, traditional to classical governing systems, animistic traditions to classical religions and philosophies in the course of my life.

I studied life sciences until the M.Sc level but have always been making art on the side as long as I can remember. Studying botany wasn't really a choice if I had to make one but today I feel blessed to have been through it as these dots start to connect themselves."

"From childhood I was fascinated by what I imagine the unknown to be and I tried to transcribe what I saw in dreams/visions as well as my observations. I loved drawing, sculpting and wrote my own stories from a very tender age but was later forbidden by my parents to spend time with crayons and wire-sculpting my own toys.

My parents decided I had to become a medical doctor at some point. Before my undergraduate studies, I convinced them to study plant biology since it felt more like a safe heaven or say a bridge between the art and what they wanted. Alongside my B.Sc program, I discretely recorded songs/ poems, wrote personal diaries and made art works to finance recordings.

After a Master’s degree in Plant biology/Ecology, I thought a Doctorate in Ethnobotany would get me even closer to finding answers to my queries or the unknown I sought. I stopped part way through and I am only starting to understand why, I experienced a couple of deaths in my family and I then “dropped out” and resorted to my all-time love (the art) to find my own answers.

Sometimes I see my life (like everyone’s life) as a tale the author would never fully comprehend so unlike in a recent past I don't bother much about these tags (art, photography, video, multimedia, poetry, sound). We only know what we experience and as far as my exhibitions go, I have shown mainly photography, video and multimedia artworks. This was mainly a result of the medium I first had access to on a professional stance which happens to be a camera."

Developing his craft as a photographer came from a process of experimentation – with a little help from the internet.

"Basically what I do as a human being is born from my quest to question the obvious in a bit to attempt to understand the beautiful chaos I was born into as well as the unknown. The art is a direct response to my observations and an attempt to transcribe what I feel.

My expression was more important and the varied media I employ only served as an end to express myself. Experimenting and trying to write my thoughts with lens-based media led me to fiction/futuristic photography with many traces of surrealism and visual paradoxes, like in "bleed for the read" (2009) and Ngoketunja "unsung heroes" (2011). My long interest in spirits and rituals forged the poetics in "she moves" and "naked routes" projects (2011-2013)."

"From the onset I approached photography/video as a painter would deal with a bare canvas, whereas documenting using these tools only served for my personal archive.

The need for transcription triggered my exploration and experimentation with varied media while guided by my intuition. I work like a child and playing around was what I could possibly turn to considering the nonexistence of specialized art schools in my country back then.

That said, I basically informed myself on the arts through a lot of experimentation not undermining instances where I used the internet to troubleshoot technical complications and later on the many workshops and residencies I was granted that further served my practice. I gained a lot of knowledge from informal talks with more experienced artists and some art theoreticians/critics."

Looking to grow beyond the confines of being labeled an “African artist,” he sought out the international connections that have resulted in his busy career.

"In 2007, two years after I finished my M.Sc program, I entered an open competition that needed one visual artist from my country to be part of an Africa/UK audiovisual tour and my work received the most votes by an anonymous jury and the public. This was irrespective of my novice status back then vis a vis other shortlisted artists.

Proceeds from this tour helped me acquire basic working tools which led me to experiment more. I later on shared the outcome of these experiments through exhibitions and one event led to another. It has been growing since then as I continue to explore.

Most days I wake up with this naive feeling that the art will do justice to itself – irrespective of the networks, circles and so on. Looking back at where and how I started only accentuates this possibility. I feel more harmony with what I do when experiments, (not clichéd mainstream art from Africa) finds resonance with like beings from around the globe without being the intention. The connections create themselves maybe due to some cosmic conspiracies which strengthen my views of our interconnectedness and a fact that just enough energy is needed, like in nature where phenomena just exist without much strife."

His inspiration comes from the spirit of experimentation and observation that has fueled his art from the beginning.

"I always begin with my experiences and observations, and then I choose the medium that could fairly express a thought or chain of thoughts. With time my quest for transcribing observation and dreams only led me to interactive mixed media installations. The interwoven nature of or the aspect of weaving of media alludes to the multiple interest and sources that inform pieces.

I observe natural phenomena, children or people in general. I see flow in these phenomena, and how people unconsciously keep on with basic rituals and courtesy hoping, wishing. I observe resulting behavioral patterns which could be born from these rituals, embedded in conditioning, repeated or transformed...not fixed - not non-violent or violent as status quo, just oscillating in time through common gestures... I see related-ness even in un-related-ness sometimes.

I have a diary/sketch pad plus a memory and tend to write my thoughts sometimes. Mostly random words/sketches/ideas. These thought energies, born from subjective observations either meet matter as words/sketches before a visual transcription is attempted or I spontaneously react using basic/complex ritual-like actions to write these through lens-based media. These transcriptions hardly follow an obvious narrative pattern. The product is mostly a weave from specific ideas/words/sketches/memory under a particular theme or related ideas.

My multimedia projects are mostly based on weaving dreams-rituals-reality (observations) using interwoven media from photography-video-sculpture and sound (as in, [in] security 1 (2011)). The interwoven nature tends to blur lines between these media and ideas and might as well be a response to the in between nature of my journey through this realm. The words/sketches/dreams plus memory generally informs fully conceptual multimedia pieces."

His background in science sometimes plays a specific role.

"Very subtly in my methodology though with a personal poetic and subjective approach. Also my interest in Ethnobotany is increasingly playing a role in my recent projects especially following my recent encounter (earlier this year) with some herbalists/shamans who helped me recover from a physical condition physicians couldn't diagnose or treat. I am exploring more the use of plants with magico-religious properties coupled with the spoken word to alleviate complicated medical conditions."

He’s very much interested in multimedia and collaborative projects based around the idea of a creative utopia – the KHaL!SHRINE project he’s founded. Located on the foot of Mont Eloundem in Yaounde, Cameroon, he describes the work that’s being initiated there.

"KHaL!LAND is a creative utopia…an ideal that has to do with one’s default. KHaL!SHRINE (an artist run alternative art space) is a consequence of this utopia, where the ideals of this realm could be experienced in the physical. At KHaL!SHRINE we focus on lens-based media, sound and multidisciplinary experimentation. We have a small digital collection of lens based and new media works from a good number of local and international artists.

I started the KHaL!SHRINE project in the fall of 2007 and it was born from a basic need of having a creative hub where young and practicing artists could exchange and experiment. This is in addition to the absence of galleries and art centres in the region with a permanent collection of lens based and new media artworks. In the course of events, this in addition to my engagement in attempting to surmount obstacles I encountered over the years, an art/wine/coffee quarterly “180 minutes at KHaLISHRINE” was born and has had a tremendous impact on the local art scene."

Since its founding in 2007, he’s been working on “The Diary of KHaL!A”, an experimental film/poem series. The center has attracted many like-minded artists from around the globe.

"This is thanks to my numerous colleagues around the world (Angela Ramirez, Brent Meistre, Erin Bosenberg, Rehema Chachage, Emeka Ogboh, Laura Nsengiyumva,Meghna Singh, among others) who accepted to share their work with a community that barely sees video/new media artworks. We have a number of artists living at the space like budding poet/photographer; Stone Karim Mohamad, Sentury Yob and Penko Simons. We have had informal art residencies/ collaborations with Astrid S. Klein; German based artist and Romuald Dikoume; a Douala based painter which ended in cross disciplinary performances. I am currently scouting locations for a permanent or moving and possibly greener space in the near future. Besides I am educating myself more especially on lines of digital programing to better serve my practice and these communities."

Em'kal's other current work includes an interactive piece based on perception and subjectivity and another expands on Interwoven in a project he describes as “in between; dreams-reality & rituals / photography-video-sculpture & drawings, a multimedia experience based on weaving dreams-rituals-reality using interwoven media from video-photography-sculpture-drawings and sound.