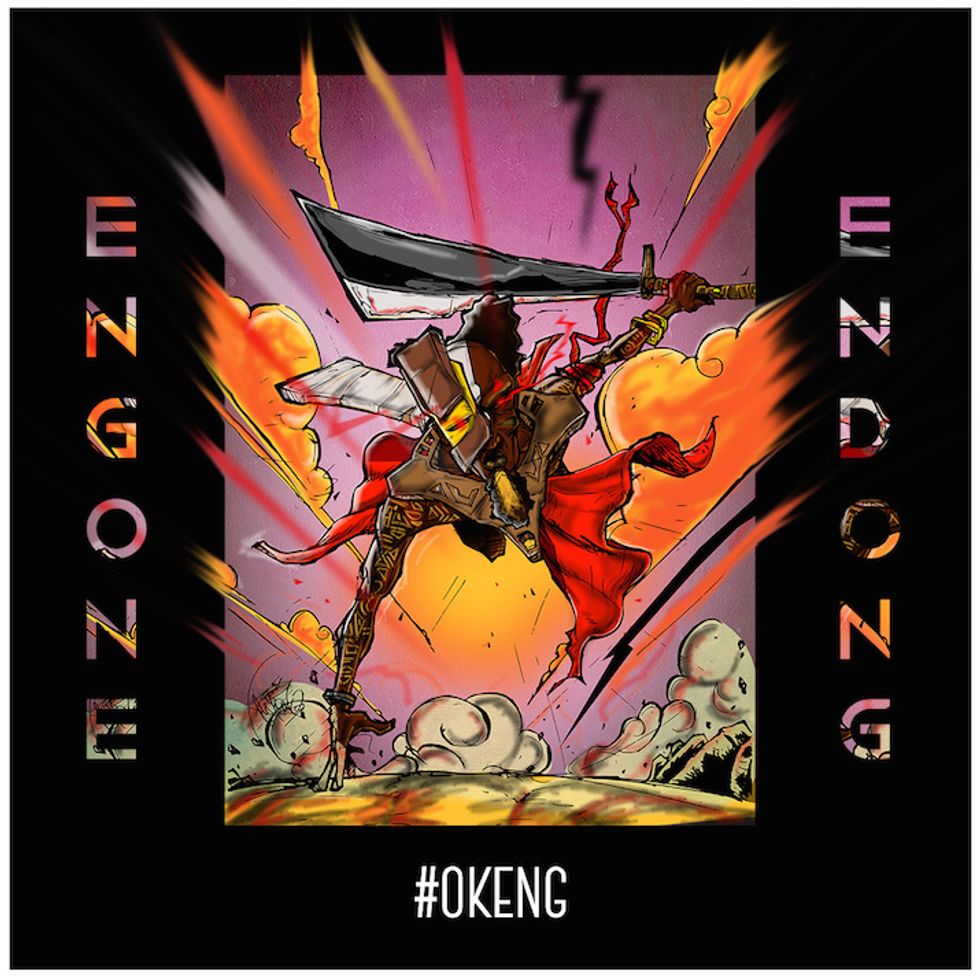 Montreal-based Gabonese producer Engone Endong comes through with the 12-track instrumental beat tape #Okeng (which translates to 'Sword' in Fang). The project blends Endong's hip-hop background with samples from various African styles — the mvett harp-lute, Ghanaian highlife, the bwiti spiritual discipline, Cameroonian bikutsi and Nigerian afrobeat — as well as influences from Japanese shinto and manga comics. The beatmaker explained the inspiration behind his tracks in detail in an e-mail to Okayafrica below.

"The first track is inspired from the Mvett, which is harp-lute of the Fang of Gabon, Cameroon, São Tomé and Equatorial Guinea. The Mvett is said to be the player/storyteller and the instrument at the same time. There are few great Mvett players remaining nowadays, but masters like Akue Obiang (the greatest of the greats), Zue Nguema (The Man-Spirit) and Mvomo Eko (the Genius) are legendary . 'Mvõn' and 'Power House' are inspired by the energy of the Cameroonian Bikutsi dance,while 'Demain, un jour nouveau' one is an attempt to fuse that Ghanaian Highlife Essence with a more urban kind of hip-hop beats."

"The 4th track 'I AM' is a tribute to the the traditional and spiritual concepts of the Yoruba religion," Endong adds. "'New Gene' is my way to say thank you to Madlib who is like a mentor for me. I personally met him, but his music forced me to pay more attention to the visualization of the sound in my mind. There is recurring  pitch-downed 'yeah' in the track, [it comes] from the Fela Queens. In the 6th track "Pour moi, quoi..." (which can be translated to 'In my opinion...'), we can hear Prince Kum'a Ndumbe III (highly-esteemed pan-Africanist academic, prolific writer and important traditional leader of the Duala People in Cameroon), saying the his life is devoted to the liberation and the fate of Africa. The track ends with him saying: 'Be yourself / Master who you are / Honor your Ancestors who welcomed you here.' The 11th track 'Demo-cree-cy' is built around Feladiscussing the meaning of the word 'Democracy' in Africa. 'Gods Among Us' is inspired by the Bwiti, which is a spiritual discipline of the forest-dwelling peoples of Gabon and Cameroon. The Ngombi Harp which heard in the track is central to the Bwiti Rite. And there's a hidden 13th track that reveals itself only when you download the entire album :-)"

Stream Engone Endong's #Okeng instrumental beat tape in its entirety and buy it on bandcamp, plus check out some of the release's cover artwork designed by Tonton Essono le Manifik, above and below. #Okeng is out on Endong's new label UNLOG.