Ethiopia on the Precipice: The Regime's Armor Has Been Pierced 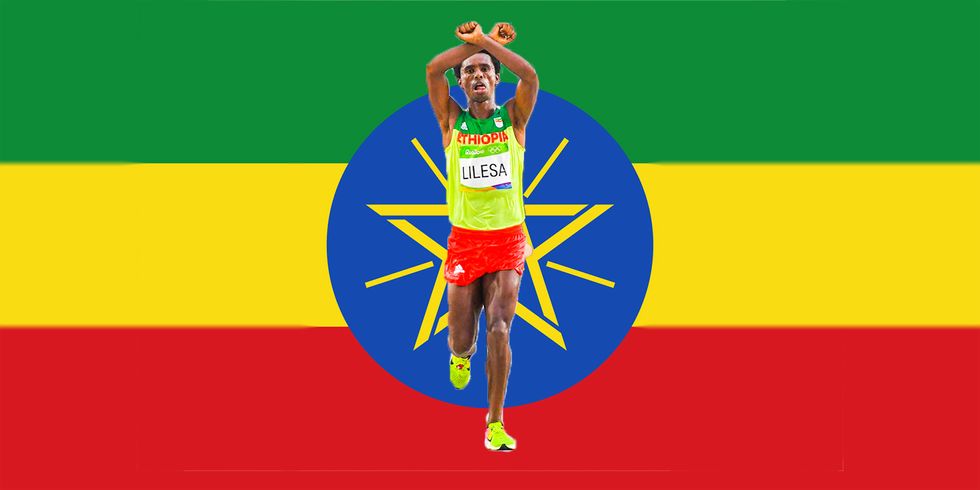 As Feyisa Lilesa crossed the finish line to win silver for Ethiopia in the men’s marathon on Sunday, he crossed his arms above his head in solidarity with the protests currently rocking his home country. This is only the most visible act on world stage of the anti-government movement gaining steam in Ethiopia and one that has kept Lilesa from returning home after the Rio Olympic games for fear of official retaliation.

Lilesa’s ethnic group and the largest in Ethiopia, the Oromo, have been protesting for more than a year against the government. Attempts to contain them with police has backfired. On August 6 thousands took to the streets in defiance of a government ban and threats of crackdown. In an unprecedented event, Amhara protesters—members of the country's second biggest ethnic group—joined the protests shattering the regime’s divide-and-rule tactics.

For the first time in a quarter century Ethiopia’s ruling party, the Ethiopian People’s Revolutionary Democratic Front (EPRDF), feels threatened and the backlash has been harsh. In two days of anti-government protests, the security forces killed 105, pushing the death toll from the nine-month old unrest to more than 600.

To assuage the condemnation, EPRDF points to its record in toppling Mengistu Hailemariam’s military junta known as the Dergue in 1991, introducing a federal constitution in 1994, and registering double-digit economic growth since 2001. Opponents respond that it has been 25 years since the Dergue was deposed; federalism and the constitution exist only on paper; and the fruits of the country's much-touted economic growth go only to regime cronies.

Maintaining total stranglehold on such a vast and diverse country is proving untenable, especially by a group constituting a mere 6 percent of the population.
While the constitution is supposed to confer autonomy to states, it’s in name only. During civil unrest, the army wrests policing duties from the local police, whose sympathy to the protesters is unmistakable. The army's takeover of civilian administration, particularly in the Oromia and Amhara regions—home to two-thirds of the country's population—speaks to the severity of the situation.

But despite brutal crack downs, the protests are gaining momentum.

The demands of the protesters are far from radical: They are simply asking the ruling party to make good on the constitution's promise of self-government; end Tigrean domination of the county's political and economic life; and open up the political space to allow the opposition, civil society, and the media to freely operate.

This requires decoupling the National Election Board from the ruling party, without which it will continue to rule forever—with a margin of 98-100 percent that even Stalin would envy. Opponents have no recourse to the courts as the courts are not independent.

If all fails, the regime can always rely on the military and security forces, whose top brass is systematically dominated by Tigreans. Maintaining total stranglehold on such a vast and diverse country is proving untenable, especially by a group constituting a mere 6 percent of the population.

The Protesters have already poked gaping holes in the regime’s armor: they laid bare Tigrean domination by showing that it is the Tigrean Liberation Front (TPLF) that rules the country and the regions. For instance, while the rank and file in both the Oromo People’s Democratic Organization (OPDO) and the Amhara National Democratic Movement (ANDM), which supposedly govern the restive Oromia and Amhara regional states, respectively, favor reform, TPLF continues to forestall any attempt at reform by hand picking their top leaderships.

After Lelisa’s display of solidarity at the Rio Olympics the protests could no longer be dismissed as the handiwork of a handful of extremist saboteurs in the diaspora.
Moreover, EPRDF’s claim that it built roads, bridges, and dams and placed Ethiopia on the global economic map is also running out of potency. Even when not contesting the rate at which the economy grew, protesters wonder if such statistics, even if true, gave EPRDF the license to kill, maim, and jail dissenters. Some even go as far as comparing Tigrean dominance to Italy’s occupation of the country from 1936 to 1941, which underscores the huge gulf that has opened between the rulers and the ruled.

Surprisingly, Ethiopia’s regime is not seeing that it has hit a dead end, perhaps blinded by past successes at suppressing numerous challenges to its tight hold on power.

One thing is for sure: It is sensing that it is losing the media war. After Lelisa’s display of solidarity for the protests at the Rio Olympics, after winning a silver for his country in a marathon, it could not longer dismiss the troubles as the handiwork of what it likes to call a handful extremist saboteurs in the diaspora. That is why it is going out of its way to state and restate that it is and has been holding discussions with the public, a claim which its western backers readily highlight to undermine calls for policy change. The fact is that the government's notion of dialogue does not entail listening but rather insisting that everyone fall in line with its position.

As the regime finds itself stuck in an impasse of its own making and increasingly unable to veer even slightly from its standard talking points, the ranks of the protesters keeps swelling. The average protester views the regime’s verbal assaults against this or that enemy as a blatant refusal to accept any responsibility for mounting tensions in the country, not to mention an insult to his/her intelligence.

Defections from the security forces could grow from trickle into torrents.
The pitfalls of clinging on to power for so long are showing. In fact, one feels as if EPRDF is speaking a totally new language of its own unintelligible to the public. The government believes that the protesters are duped by diaspora social media activists. The protesters believe what Marara Gudina, chairman of the only legally operating Oromo opposition party in Ethiopia, once said about the ruling party: EPRDF has a big mouth to speak but has no ears to hear. Under such a situation, a correct remedy is to progressively adopt a higher viewpoint, which in turn requires a genuine intellectual, moral, and affective conversion. Unfortunately, EPRDF is in no mood for any such genuine conversions or conversations.

Rather than stepping out of its paradigm, a feat recently achieved by General Tsadkan, former chief of staff of the Ethiopian army, EPRDF is simply digging in and rather boxing itself. The protesters on the other hand have proven highly resilient. Barred by bullets to venture on to the streets, frustrated protesters at many localities have torched regime symbols.

Anti-government work stoppages, strikes, boycotts, and sabotages in the urban areas and hit and run attacks in the countryside may multiply. Defections from the security forces could grow from trickle into torrents. Passive resistance among members of the security forces of Amhara and Oromo origin could coalesce into the nuclei of future guerrilla units. Production, especially agricultural production, could plummet. As the chaos worsens, moderate voices could be discredited and replaced by hardline elements. In short, continued instability will reduce to dust everything the regime claims to have built over the years. Worse still, continuing repression risks destroying whatever remained of the social fabric that holds society together.

As Ethiopia's three giant elephants—the Amhara, Oromo, and Tigraway—rehearse a dangerous dance on the precipice, it is worth remembering that the last time the three battled each other, in what is known in history as the Era of the Princes, the country suffered decades of turmoil followed by foreign invasions. This time around, the invasions could be preceded by deadly incursions by nefarious non-state actors.

As the specter of prolonged instability looms large in Ethiopia’s front mirror, the US and its European allies, the ruling party’s foreign backers, kept churning out hollow statements of concern. Rather than pressing EPRDF to seek a peaceful political way out of a growing crisis, they kept bankrolling it. Their rationale: Their leverage is limited and the EPRDF may totally shun the west and turn its face to China. False bravado aside, EPRDF cannot afford losing the life-support extended to it by its global benefactors. Should Ethiopia, home to 100 million, falter, the floodgates to hell will open up in the Horn of Africa, already a vortex of instability.

The time of reckoning has arrived for Ethiopia’s rulers and its western allies. As evident from an op-Ed by Tom Malowniski, the state department’s top official on Africa, the US seems to have finally mustered the courage to advise its ally, the EPRDF, that business as usual is a recipe for disaster. If Malowniski and his bosses are serious about their reading that the challenges Ethiopia is facing are of a critical nature, needing changes in paradigm on the part of Ethiopia’s ruling party, Lelisa’s uncommon courage will not be all in vain. As an Ethiopia that has solved the Oromo problem and dealt with its acute democracy and human rights deficits will be a stronger Ethiopia. If not, Ethiopia could very well go the way of its failed and failing neighbors.